The notorious Linndale speed trap faces down another would-be killer 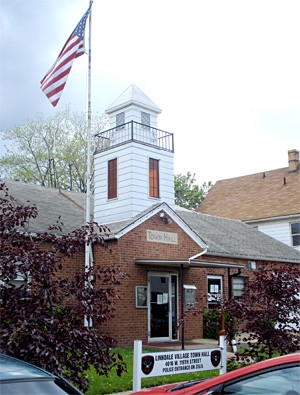 It's always easy to spot the rookies. Veterans shuffle in, grab a seat, and wait their turn, their faces flush with resignation. First-timers never stop scanning.

Paper-thin industrial carpeting. Wood-paneled walls. Cheap metal chairs. As folks file in on a spring afternoon, you can almost hear them thinking, This is it?

"They sure do make a lot of money in this little room," says one newbie, re-looping his belt after passing through a metal detector.

The barely concealed awe in his voice is understandable. For all the attention it receives, Linndale's mayor's court should resemble a gilded shrine, some sort of Taj Mahal of jurisprudence. Instead, it looks like your uncle's basement.

But the tiny courtroom has a big reputation, as the dreaded way station for all unfortunate souls caught in Northeast Ohio's most infamous "speed trap." The don't-blink stretch of Interstate 71 is monitored nearly 24/7 by squad cars lurking beneath the 117th Street overpass, ready to ticket anyone cruising a handful of digits over the 60-mile-per-hour limit. And over the years, the commitment with which Linndale's police cars patrol this stretch of asphalt has made the city — and, by extension, this courtroom — a prime target for every I-team in Cleveland.

For nearly five decades, what's happened in this small courtroom has defined Linndale, a tiny township squeezed between Brooklyn and 71. Thanks to a legal quirk that Ohio shares with only one other state, mayor's courts — traditionally presided over by the mayors of cities too small to have their own judiciary — are allowed to keep nearly all of the revenue from the thousands of $90 fines they levy each year. That's how a 117-person village like Linndale can afford a police force with as many cars as blocks they patrol. Last year alone, the city raked in almost $1 million.

But with a new bill promising to vanquish mayor's courts, Linndale's many enemies are hoping this is the year the village's lurking squad cars get parked for good.

It's not the first time Linndale has found itself in the legislative crosshairs. In 1994, a bill sponsored by an Olmsted Township Republican — he'd been pulled over in Linndale, naturally — tried to ban officers who patrolled less than 880 feet of freeway from leaving their boundaries to ticket speeders. It was obviously a direct swipe at Linndale. The Ohio Supreme Court threw it out.

But in the court's decision, a dissenting judge argued that Linndale was using the freeway as its personal ATM. And in 1999, Chief Justice Thomas Moyer commissioned a study on mayor's courts. The finding: You can't have a mayor — whose job security rests on his ability to keep the city coffers full — ruling on traffic tickets. It's like C.C. Sabathia calling his own balls and strikes.

"Mayor's courts are this weird throwback to the early 20th century," says Chris Davey, spokesman for the Supreme Court. "Any reasonable person looks at this system and it's clear it does not pass the smell test."

Unlike some Ohio mayor's courts, Linndale's isn't actually ruled by the mayor. It's run by a magistrate. But that magistrate, a former county prosecutor named George Sadd, was appointed by the mayor. So his job, too, appears tied to his ability to keep the fines rolling in. That's why Linndale is once again on the docket of downstate lawmakers.

"Every 10 years or so somebody comes after us," sighs clerk of courts Mike Toczek, a former Linndale mayor and husband of the current one, JoAnn Toczek.

This time, it's Larry Wolpert. A Republican in suburban Columbus, he's sponsoring a bill that promises to do away with Linndale's speed trap. And if anyone can kill Linndale's mayor's court, it might be Wolpert.

Wolpert was behind the "New Rome bill," which in 2003 shut down mayor's courts in towns with less than 100 people. The law effectively vanquished New Rome, a 60-person village that was absorbed into a nearby county after losing the revenue from a speed trap so notorious, it has its own web site: www.newromesucks.com.

Now Wolpert has turned his scope to a larger target: mayor's courts in townships under 1,600 people. The cutoff would eliminate nearly half of the state's 300-plus mayor's courts.

"It's remarkable we still have the mayor's courts system," says Wolpert. "There are still 100 mayors who are non-lawyers serving as judges. Can you believe that? Could be a truck driver, could be a social worker. That's an image we don't want."

Wolpert says he still gets standing ovations in Columbus for putting the ax to New Rome. And he isn't shy about his desire to do the same to Linndale. He's refining the bill's language and working closely with his supporters in the Supreme Court, hoping to drum up enough votes. But even if his bill doesn't pass, he boasts, he'll slip language into a different bill before he's term-limited come January.

"If I can't get total reform, I will get an amendment before I leave," says Wolpert. "Just one little amendment that will take care of them."

For now, though, Linndale-marked squad cars keep skulking under the overpass, and speeders keep filing into court on Wednesday afternoons. On this first Wednesday in June, the session ends around 5 p.m., when Nathaniel Robinson, belt now firmly buckled, ambles out of the courthouse door, squinting into the sun. Robinson was driving his Bonneville SS with two ladies in the car — "trying to show off," he says — when he got pulled over doing 88. Living just a half-mile away, Robinson admits he should have known better and driven slower. But he knows Linndale's reputation too, so he's not entirely contrite.

"Yeah, it serves a purpose," he says as he backs away from the courthouse. "It serves the purpose of making money."