Mrs. Henderson shakes up war-torn Britain with an assault of the flesh. 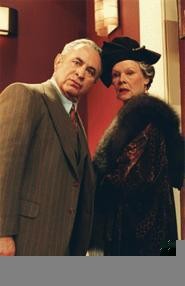 The studied British theatricality and sharp wit of Mrs. Henderson Presents are likely to make it a favorite among nostalgiaphiles, theater buffs, and the tea-and-crumpets set. Sailing along on the strength of another showy performance by Judi Dench, Stephen Frears' period frolic is this year's Being Julia, adorned with the same kind of high-toned baubles and bitchy bons mots. Playwright Martin Sherman (best known for Bent and Rose), who wrote the screenplay, is no Oscar Wilde. But he's injected enough casual venom into the dialogue that collectors of acerbic insult and elegant aphorism are bound to be pleased, even when the dramatic action slows to a crawl. The film is based on real events, and let's hope they moved along faster than some of these do.

When it comes to upstaging the universe, Dame Judi is certainly the trouper that Annette Bening was, and then some. Here she portrays an imperious septuagenarian named Laura Henderson who, after three decades in India, returns to pre-World War II London, buries her husband, and promptly sinks his leftover millions into a career of her own. No prolonged grief, dull charity fetes, or garden club meetings for this human whirlwind. When she sees that a decrepit theater on Soho's Great Windmill Street is for sale, she pounces. Then she hires a stylish impresario named Vivian Van Damm (veteran Bob Hoskins) to stage musical revues and quickly forges a relationship with her new collaborator that ranges from comically antagonistic to downright bloody. If anyone can hold his own in the company of the outrageous, touchingly out-of-touch Mrs. Henderson, it's a seasoned old professional like Van Damm. He calls her on her crackpot schemes and fights fire with fire. Their barbed, beautifully timed exchanges are a pleasure to hear and to watch, as though we were seeing Tracy and Hepburn reborn.

Between Laura's energy and Vivian's business wisdom, they soon have a hit on their hands with nonstop vaudeville shows, featuring an irrepressible Will Young as Bertie, the obligatory gay song-and-dance man. But the competition catches on, and when it comes time to tweak the fare, our dauntless heroine knows just what to do. Mimicking the famed Moulin Rouge in Paris, the Windmill Theater boldly decides to mount a nudie revue. This being staid London, however, certain restraints must be observed. One of Mrs. Henderson's funniest scenes has Laura invading the offices of the stodgy Lord Cromer (Christopher Guest), where she proceeds to deflect his censor's resistance to public nudity with a pledge to keep her actresses totally immobile. Thus do the Windmill's enthusiastic audiences come to behold stock-still, unclothed tableaux depicting American Indians, mermaids, and Annie Oakley. As Sherman's script forcefully reminds us, Mrs. Henderson's theater never closed thereafter -- not even during the most dangerous days of the Blitz.

Director Frears, whose edgy films include The Grifters and Dirty Pretty Things, seems to be in a more relaxed mood here, happy to honor all the conventions of backstage comedy and willing to indulge Dench in a showcase every bit as overdecorated as her Queen Elizabeth turn in Shakespeare in Love or her gabby Lady Bracknell in The Importance of Being Earnest. Mrs. Henderson has some dark moments, deriving from the terrors of two world wars, and in its latter stages, as the Windmill becomes a haven for young soldiers, it insists on giving us a huge dose of Stiff Upper Lip. The vision of Mrs. H., up on the roof of her theater, damning the Nazis in Churchillian tones, may inspire old-line British patriots to wave their Union Jacks. But such stuff seems a bit off in a woman so thoroughly self-absorbed. Oh, well. For the most part, this is a genial Brit charmer in the manner of Calendar Girls, despite the title character's diva-style antics and the blunt force in some of writer Sherman's saltier exchanges. The nudity here is about as chaste and squeaky-clean as unclothed flesh can get, and there are a couple of superfluous subplots (one of them involving the revue's blonde principal, played by Kelly Reilly) that might better have been left on the cutting-room floor.

Still, there's not much use quibbling over the small points. As a celebration of theater-world eccentricity, spiced with old-fashioned English pluck, Mrs. Henderson hits all its marks, well-worn though they be, and Dench fans will once more find themselves glorying in her reckless spirit.