It's been almost 60 years since Bob Hope discovered him, but Tony Bennett's jazz still swings. 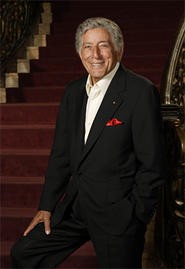 Want to know just how far the art of American vocal pop has come? Then you should've watched Tony Bennett on American Idol advising contestant Blake Lewis on how to interpret "Mack the Knife," a pop standard (about rape and murder) made famous by Louis Armstrong and Bobby Darin in the '50s, but originally composed by Kurt Weill, with lyrics by Bertolt Brecht, back in the '20s.

Bennett, 80 -- the last great vocalist from the golden age of the Great American Songbook and winner of 15 Grammys -- tells the kid, "This song is pre-rap, you know -- very soft gangsta," which basically means: See kid, it's a rap on a killin' banger from back in Brecht and Weill's Berlin hood -- Deutsches Theater, east side, boyeee! But don't be thuggin' it up.

Well, Bennett wasn't going that far, but he also wasn't the clueless old dude trying to speak hip to the kids. Bennett knows the music industry, and he knows what it's like riding out fads while struggling to keep his own sound viable. In fact, Bennett was in Sanjaya's shoes decades ago. "I started out in the '50s with Rosemary Clooney, and the two of us were really the first 'American idols.' We appeared on a musical talent show [Arthur Godfrey's Talent Scouts in 1948] just when TV was getting started. And Rosie won, and I came in second."

But Bennett had gained a lot of experience by that point. He was born Anthony Benedetto in Astoria, Queens, in 1926. He had his first singing gig at the opening of the Triborough Bridge when he was 10, eventually dropping out of high school to earn money for his family.

"You know, one of my first jobs was as a singing waiter," he admits. "The diners would request a song when we took the order. And then, if it was a song I didn't know, I would go back to the kitchen, and these two Irish chefs would teach it to me. And I would go out front and sing it."

World War II interrupted young Tony's rise. He went to Europe, helped push the Germans back over the Rhine, and witnessed Nazi horror when helping liberate a concentration camp in Bavaria. (Asked what he thinks of the current Iraq war, he simply says, "I served in WWII as a foot soldier, and I left that experience knowing that war is the lowest form of human behavior possible. We are all on this planet together as human beings first, and we need to avoid war at all costs.")

After the war, he was demoted after defending a black friend who was ordered by an officer from the South to eat in the kitchen (Bennett was later active in the civil-rights movement). He left the Army in 1946, and his big break came shortly after his television appearance -- when Bob Hope took him under his wing. This resulted in a recording contract with Columbia, which led to schmaltzy hits arranged by Percy Faith and legions of screaming teen fans.

As the '50s went on, though, the screaming teens left for Elvis, and Bennett started leaning more toward jazz and swing, hooking up with the Count Basie Orchestra. Making music his way, Bennett shaped his vocals almost like a jazz instrument, instead of straight crooning -- and he still got hits such as his signature song, "I Left My Heart in San Francisco."

But again cultural change threatened to turn him into a permanent Vegas lounge act. As the '50s became the '60s, Columbia panicked, pressuring Bennett to record the Tony Sings the Great Hits of Today! LP, which resulted in big band versions of hits like "MacArthur Park" and a version of "Eleanor Rigby" that rivals William Shatner's recordings in brain-melting hamminess. (Have you ever heard Kirk "sing" "Lucy in the Sky With Diamonds"?)

But Bennett avoided a faded star's sad end. After the '70s -- during which he produced some fine recordings with jazz pianist Bill Evans and suffered a bit of a cocaine problem -- he put his career in the hands of his son Danny, who had the genius idea of having his dad just be himself as a performer. As a result, Bennett secured appearances on The Simpsons and MTV: Unplugged, showing the kids something they'd never seen or heard before: emotion-drenched crooning with a jazzy swing. By the time the retro-swing fad came along in the '90s, Bennett was right there, reaping the rewards of being more real and less ironic than the Cherry Poppin' Daddies. And though the retro thing is now another faded memory, Bennett is still going strong with another platinum-selling, Grammy-winning album: Duets: An American Classic.

So, yes -- his appearance on Idol was a big slice of American cheese. But he wasn't coaching the kids through an interpretation of "My Humps." He made them sing the classics he has sung. "I think all artists have to battle against losing their creative integrity, and certainly, I had my share of that," Bennett says. "At that time in the '70s, I had some doubts about whether I should keep on making the kinds of records that I had been, and getting pressure to do something else.

"I talked it over with Count Basie, who was just a very straightforward, salt-of-the-earth kind of person, and he looked at me and said, 'Why change an apple?' That was all I needed to hear, and never doubted things after that. And I guess it turned out fine."