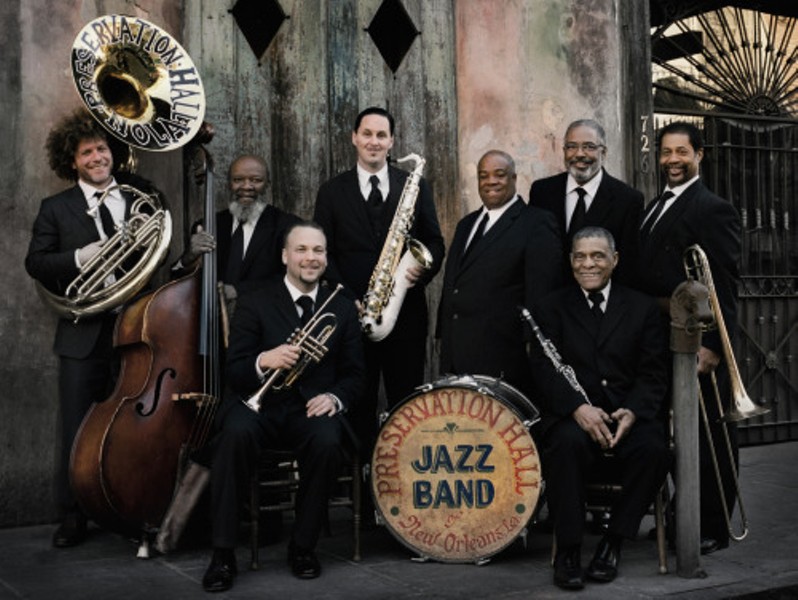 When Allan Jaffe and his wife Sandra moved from Pennsylvania to New Orleans in the early ’60s, they didn’t initially come for the music. But they ended up staying for the music after they took over a small, dingy art gallery in the French Quarter and turned it into Preservation Hall, a 100-seat concert venue that became the home of many a New Orleans-style jazz jam session and yielded the touring band, the Preservation Hall Jazz Band. The venue is still a hot spot in the city known for live music. No one knows the venue’s history better than Ben Jaffe, son of the late Allan Jaffe. He spent some serious time hanging out at Preservation Hall while growing up and currently serves as a music director of the Preservation Hall Jazz Band. For this tour, dubbed “Oh Yeah!” on account of its whimsical nature, the troupe has teamed up with New Orleans icon Allen Toussaint for the first-ever joint tour. Jaffe phoned in from New Orleans just as the tour was about to start.

Allen Toussaint says he performed with the Preservation Hall Jazz Band back in the ‘60s. Any idea what the context would have been?

I think it was in a casual sense. Allen knew my father, and my father recorded all the Preservation Hall albums at his studios. They knew each other and had a mutual admiration. All the musicians who played with Preservation Hall have had a relationship with him. Our tuba player is related to him. Everybody all grew up knowing each other. That’s why it’s hard to have an enemy in New Orleans. They might be your cousin.

Do you have any recollection of the first time you met Allen Toussaint?

Oh yeah. I absolutely do. My dad was performing during Jazz Fest. Back in the ’70s and’ 80s, they used to take over this boat on the Mississippi River called the President. It had this gigantic ballroom that could hold thousands of people and they used to have rock concerts in it. During Jazz Fest, they would have shows that went on while the boat went up and down the Mississippi. The lineups would be incredible. I remember going on a night of piano players and it was Dr. John, Fats Domino and Allen Toussaint. I remember being on the balcony behind the stage, poking my head through the banister and watching those guys. Allen’s band members all wore the tuxedos with the tails and the white shoes. And he came out and he just had a certain energy. He was one of those people. Even if you don’t know what he is or what he does, you know that there’s something happening. As I got older, the Preservation Hall band used his studios to record their albums. I used to spend a couple of days a year in the engineer room hanging around the studio. Everybody knows Mr. Toussaint in New Orleans.

Talk about his music a bit and what it represents.

You can’t talk about New Orleans music and not talk about Allen Toussaint. If you looked at the 100 most popular songs to come out of New Orleans, he would half of them. He either wrote them, arranged them, produced them or played them. Or all of the above — “Mother-in-Law,” “Working in a Coal Mine.” The Meters were his rhythm section. He was the guy. Everybody wants to have him involved in something they’re doing. Paul McCartney came down here to work with him. The Band worked with him. And Dr. John. People wanted the Allen Toussaint touch. They wanted the Allen Toussaint sound. How many people own a sound? Maybe a dozen?

Talk about your music a bit and what it represents for the city of New Orleans.

It’s a multi-generational band. We have members ranging from their thirties to their eighties. We represent something like seven generations. That’s incredible. Myself, I grew up with the musical tradition that has survived some very challenging years. Preservation Hall did provide a lot of security to a lot of musicians and allowed so many of our musical traditions to be passed on to another generation. That’s part of our tradition but so is Fats Domino and Professor Longhair and Allen Toussaint. That’s all part of our musical tradition, just like Jellyroll Morton and Louis Armstrong. He’s up there with those guys. For us, our trumpet player’s uncle, John Brunious, who used to lead the Preservation Hall Band, can be heard on those horn parts. That’s how personal it is to us.

Talk a little about what you have planned.

No. I’m as excited to have that conversation as anybody. We were supposed to talk today but just haven’t connected. Coming from New Orleans, there is a language we all speak. If Allen came in and he just started a song that we hadn’t rehearsed or practiced, we’re there for him. What’s important to me is that we’re playing selections from the entire history of the band. With Allen being there, it’s not just a history of New Orleans jazz but of New Orleans music. He’s a large piece of the New Orleans musical pie. He’s not just a slice. He’s a good third.

The concept for the tour was just an “Oh yeah” moment?

That’s exactly where we got the idea from. We play some shows with him when he’s in town. He loves to sit in with us. Post-Katrina, he had this new appreciation and love for this music that he grew up and that his parents and grandparents listened to. I find that very interesting. As you get older, you get a different understanding of your childhood and things that are important to you. It makes sense that he goes back to the first thing that he ever heard.