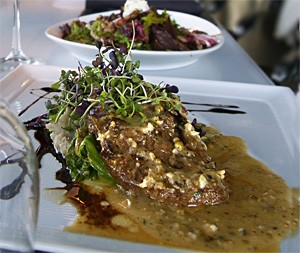 There's no way this should be good. A vegan-kosher restaurant in a struggling Rust Belt city, owned by an absentee rock-and-roller? Can someone say "sitcom"?

Yet thanks to stunning design and a heaping helping of culinary legerdemain, Akron's new VegiTerranean — the pet project of Cuyahoga Falls native, animal-rights activist, and international rock star Chrissie Hynde — not only skirts the obvious pitfalls, but stands out as a smart, sophisticated addition to the region's dining scene.

Much of this can be credited to the restaurant's eye-popping setting on the ground floor of the newly constructed Northside Lofts, a massive, upscale condominium complex rising from the rim of the Cuyahoga Valley. The dining room, bar, and café are knockouts: cool, collected pours of concrete, glass, and stainless steel, done up in shades of black and white, offset by dramatic lighting. About the only decoration is a series of handsome black-and-whites of celebs like Alec Baldwin and Joaquin Phoenix — all, we're told, supporters of PETA.

Knowing Hynde's rep, we left our leather coat at home and wore the microfiber instead. But other than the photos, there was nothing remotely preachy about the restaurant. And there were few overt references to the owner's celebrity status: Just three inconspicuous photos and one brief if debatable endorsement on the menu — "Chrissie promises . . . 'Best fries you've ever had'" — were about it for star power.

All attention is instead turned toward the food — ideal in a traditional restaurant, but risky in a place where the pantry eschews butter, cream, cheese, eggs, and meats. The "trouble," if you will, with the vegan cupboard is its lack of umami — that meaty, mysterious "fifth flavor" that researchers now believe attunes us to protein. While mushrooms, fried potatoes, and even a juicy tomato rank relatively high on the umami scale, the big players are animal products: parmesan cheese, grilled beef, or a dash of Thai fish sauce, for example.

So how to make a menu of plant-based foodstuffs pop? That's the conundrum that executive chef Scot Jones (who also oversees the kitchen at Canton's Fedeli) so skillfully addresses with a smart combination of attentive preparation, assertive seasonings, and some inventive substitutes. He employs "fabulous fakes," typically based on soy milk, cheese, and tofu; nut butters and creams; nutritional yeast; and Gardein (short for garden protein), a soy- and wheat-based pretender that successfully mimics the look — if not the taste or texture — of chicken and beef.

Clearly not every meat-free dish can scale the heights of carnivorous rapture. Made without real parmesan, the pesto that should energize a bowl of penne and faux chicken strips lacks a certain zest. Bereft of butter or cream, a butternut- and acorn-squash soup tastes dull, if decidedly wholesome. And while dainty fillets of battered and fried fake chicken offer plenty of crisp-edged crunch, their flavor fades fast into nothingness. Those Hynde-endorsed fries? It's not that they aren't good. But when it comes to frying a memorable frite, any meathead will tell you that duck fat is where it's at.

Still, Jones does a remarkable job of coaxing out kick-ass flavors. Plus, there are plenty of straightforward temptations, like that mouthwatering pizza du jour, amply topped with perfectly prepped artichokes, red onions, and radicchio, and richly goosed with herbs, spices, and EVOO. Served with a generous salad of baby greens in a light balsamic gastrique, it was perfect either for sharing or as a substantial main course for one.

To drink, the handsome bar is stocked with plenty of vegan-approved spirits and wines, although the 50-bottle wine menu offers nothing by the glass; nor is there a menu of specialty martinis. And given its $10 price tag, a smallish pomegranate 'tini could have shown a little more muscle.

Not that any of this seems to trouble the eclectic clientele, a mix of artists, students, middle-aged hippies, and well-groomed hipsters — who may or may not be vegans. Dining here isn't so much about making a statement, their presence seems to say, as it is about kicking back, enjoying the classy vibe, and digging the inventive eats.

That's our definition of a good time too — whether those eats are animal-free or not.