With Great Big Sea. Wednesday, March 24 at the Odeon. 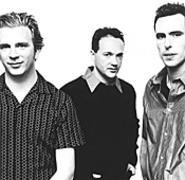 It's only fitting that when Push Stars frontman Chris Trapper decided to leave his Buffalo hometown, Boston would be his destination.

"I think there is a Boston sound," Trapper says. "I think maybe pop music here is seen as more of a cool thing than it is anyplace else, because when bands like the Lemonheads and Buffalo Tom were starting out, they were seen as alternative, but they were also very, very pop. They were seen as kind of cool, shoegazing bands, but they also had the pop element, so you could play it for your mother. It's easier here. You can still be kind of cool."

The Push Stars were another in a line of talented Boston pop bands without a record deal when next-state neighbors the Farrelly Brothers took a liking to their song "Everything Shines," which ended up on the soundtrack for There's Something About Mary.

Besides giving the band some much-needed visibility -- which led to a signing with Capitol -- "Everything Shines" has recently played matchmaker. Current tour hosts Great Big Sea had a hit with the song north of Trapper's hometown.

"We were playing on the Matchbox 20 tour in Canada last fall, and fans were approaching us, saying, 'Hey, you covered a Great Big Sea song. That's great.' After a little while we decided just to let it go and say, 'Well, thank you for the compliment.'"