A paralyzed millionaire and a poor ex-con buddy up 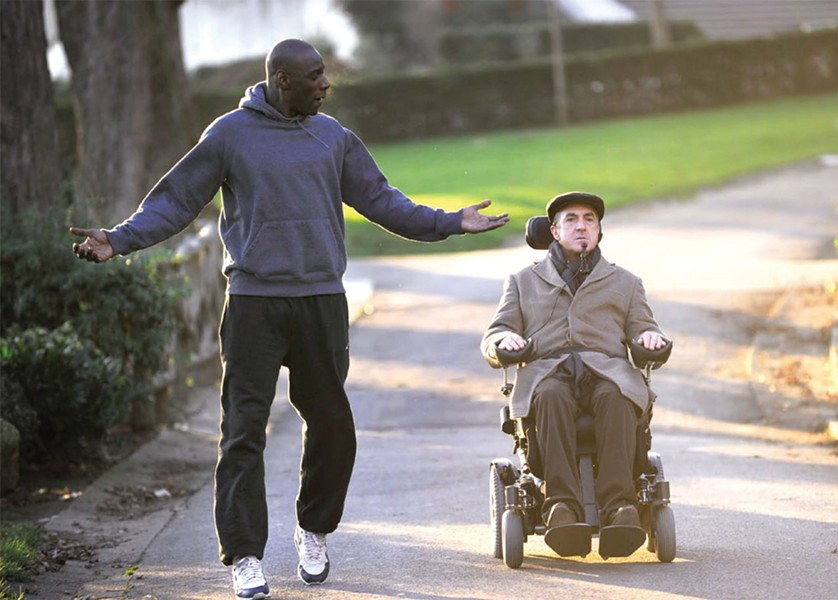 The Intouchables is huge in France. Avengers huge. It's one of the most popular movies of all time overseas, and it was nominated for a bunch of awards when it was released there last year. And it's easy to see why: The movie is funny and heartwarming, and brings together two guys from completely different racial, economic, and social backgrounds — longstanding qualities of films that are called "crowd-pleasers."

These culture- and language-crossing characteristics certainly make The Intouchables an easy film to like. So do the performances — especially Omar Sy as an ex-con barely looking for a job to keep his unemployment benefits coming. It can get too cute at times, but at least you don't have to slog through any of the usual issues or hurdles found in most black-and-white-relationship movies.

After spending some time in prison for a robbery, Senegalese-born ghetto dweller Driss heads to the filthy-rich part of Paris to get his unemployment forms signed by Philippe (François Cluzet), a quadriplegic millionaire who's confined to a wheelchair after an accident and looking for someone to take care of him. Much to his surprise and disappointment, Driss is hired as Phillippe's full-time caretaker. Suddenly, the poor, pot-smoking, and old-school R&B fan finds himself in a brand-new world filled with the very best of everything.

The pair's mutual attraction is immediate. Driss takes his new job seriously, but not too seriously; he encourages Phillippe to live a little and not wallow in self-pity — an attitude Phillippe clearly appreciates, since everyone else either tiptoes around his disability or feels sorry for him. Driss is just what Phillippe needs to kick-start his life again, even though his family, friends, and assistants are wary of the dark-skinned stranger.

Coming from different parts of the city that might as well be entirely different countries, Driss and Phillippe are indeed an odd couple. But they hit it off from the start, giving each other shit at their very first meeting. Driss mocks Phillippe's tastes in classical music and fine art; Phillippe delights in having Driss dress him like "a chick." But as Driss starts to genuinely care for Phillippe, they become close friends, introducing one another to their respective worlds. They go to the opera, they get high, and they call up some questionable girls for massages.

The Intouchables, which is based on a true story, is essentially a buddy pic with one difference: We actually get to see why these two seemingly incompatible men would get along and, more important, we come to understand how they become such close friends.

Even when the movie occasionally goes soft — just wait till a Hollywood studio gets its hands on the rights for a remake — writers and directors Olivier Nakache and Eric Toledano ground the story in the very real pain gnawing at both characters (their family and love lives are fractured, torn, and complicated). By the time the opening scene works its way back into the final stretch of the movie, prepare to be moved. It's the perfect end to a perfect relationship.