The Race Is On

Dylan won the 2006 Pazz & Jop poll, but TV on the Radio is the real protestor. 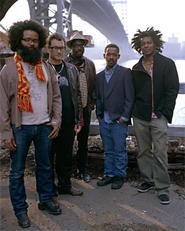 The cover art for The Village Voice's 2006 year-end music critics' poll -- that thing called Pazz & Jop -- shows the two top artists in fairly unflattering positions. Bob Dylan, in caricature -- hook-nosed and hunched on a motor scooter -- sneers over his shoulder at TV on the Radio's guitarist and singer Kyp Malone -- who stares bug-eyed at readers as he lies splayed across the ground, tire marks across his back, under a headline that reads "Blood on the Tracks."

The image caused a minor dustup, and not just for the wonky headline. Meant to depict Dylan's narrow victory in the poll, the image was perceived -- by no small number of people -- as patently racist.

"Even in the post-Chappelle era of it being hip and edgy to discuss and portray ideas about race, there are still wrong, tasteless ways, and this was one of them," wrote Martín Perna, TV on the Radio's sometimes horn player, in a letter to the editor. Mentioning both James Byrd, the black man dragged behind a truck and murdered by white racists in Texas, and Arthur "J.R." Warren, a gay black man repeatedly run over and killed in West Virginia, the letter concluded, "Intentionally or not, this cover sends the all-too-familiar message to people of color: Make something too unique, make something outside of your assigned place-role, and get run over by a white man."

When asked about the cover a few days later, Tunde Adebimpe, TV on the Radio's other vocalist, offers what might be called pre-Chappelle earnestness.

"I looked at it and was trying to look away, saying to myself, 'God, that can't be as racist as it seems, but it's bugging me out,'" says Adebimpe via phone from his Brooklyn apartment. "And I'm not the most sensitive about those things, but if it's fucking with me, if I see it as a little racist -- it probably is. Half of the people I know saw it that way, and half of the people didn't, but at the end of the day, it's simply misguided and ignorant. I could see how someone could completely overlook it, and I can see how [the racism's] the only thing you'd be able to see. I care, but I don't care. You'll be wrapping your fish in it next week."

As ridiculously polarizing (and, some say, ridiculous) as the murderous, motor-scooting folksinger was, the visual juxtaposition of the critical front-runners underlines interesting parallels: Where Dylan is rightfully considered the father of the popular protest song, the most ambitious campaign on last year's Modern Times -- the title track -- is aimed at loosening Alicia Keys' zipper. TV on the Radio's Return to Cookie Mountain, on the other hand, fumes with the intensity of mid-'60s Dylan.

An ominous treatise on the war-weary American psyche, Return to Cookie Mountain opens with Kyp Malone's severe falsetto intoning the oft-quoted line, "I was a lover before this war." The nimble implication of the lyric -- that the narrator is positioned opposite the famous "lover, not a fighter" disposition -- is an apt introduction to the indignant discoveries that follow. Against a smear of synthetic violins and a disjointed hip-hop backbeat, the track is, at its essence, a protest song. But where most protest albums favor words over music, Cookie Mountain offers such an inventive blend of influences that its production makes it the most sonically subversive and challenging rock record since Radiohead's Kid A.

Yet it's also the most eloquent protest record yet to position itself against the current war. Take, for instance, the midtempo grind of "Providence," where Adebimpe sings, "Suddenly, all your history's ablaze/Try to breathe, as the world disintegrates" and ends the chorus with advice to his fellow fighters, "Hold your heart courageously/As we walk into this dark place/Stand steadfast erect and see/That love is the province of the brave." Or how about the most pointedly cynical track, "Let the Devil In"? Driven by a kind of digitized Mardi Gras street beat, Adebimpe seethes, "Oh that calls to mind a joke, an off coloring/About these fools blindfolded, drugged, and raped and left laughing /They let the devil in; he brought his pirate friends/They brought a hunger for blood, and flesh, and bone, and skin."

Tunes like "Wolf Like Me" and "Blues From Down Here" launch urgent, uncomfortable lyrical swipes, like the opening track -- casting the band as fighters not by choice, but because of the sharks circling around them. In the last track, "Wash the Day," the metallic birds are screaming above, car bombs are exploding all around, and their hands are full of "diamond encrusted guns." As they are forced to fire their weapons, fire them they must.

"We'd much rather write songs about plants growing and beautiful things and kittens being born," admits Adebimpe. "But you end up writing about what's kind of bugging you at the moment, and what's kind of bugging us -- and a lot of people -- is our misguided government. When something is as obviously out of whack as the American system has been in the past couple of years, it changes your way of thinking."

One need look no further than the Dixie Chicks' Grammy sweep to see that the dialogue of dissent is falling on an extremely sympathetic audience these days, which certainly helps to explain the arrival of Cookie Mountain atop year-end lists at more traditionally mainstream media outlets than The Village Voice, like the Associated Press and The New York Times. Hell, it even got lip service in USA Today.

Did Adebimpe predict such a score?

"I think we were happy with it when we were done, but we had no idea how, or even if, people would respond," he says. "But I think it captured the way we were feeling then, and I'm proud of it. It's important to document the way you're feeling during the short time that you're on this planet."

He's talking about the natural impulse that has always led people to leave their mark using art. But just months after its release, the fact that Cookie Mountain has had a shelf life more long-lasting than fish wrap also speaks to the possibility that it is the kind of protest record, like Dylan's best, that long outlasts the topics it remonstrates against. It's a record that, years from now, just might leave a trail leading back to the essence of Adebimpe's short time on the planet -- one that is marked with courageous hearts and blood on the tracks.