With Shiny Toy Guns. Wednesday, May 9, at the House of Blues. 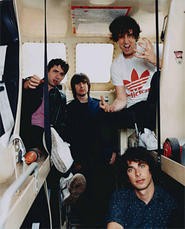 With the hipster-ascendancy of Devendra and freak-folk a few years back, disco-punk's indie cred totally plummeted (something suburban mall brats clear across the Midwest have yet to grasp, but they will -- in a year or three). Anyway, passing from the age of coke to that of Hash didn't bode well for those groups unwilling to part with their Gang of Four and Josef K records. Hell, maybe they couldn't see themselves sporting Native American headdresses and playing overpriced campsites in Big Sur? I don't know.

As for the Rapture, it deserves a D, possibly a straight-up F. Compared to, say, Liars -- who basically reinvented the wheel over its last couple releases -- the New York quartet has actually devolved; it sounds more like cheesy new wave/post-punk parody than it did back in 1999 (when the group still copped tricks from Fugazi). And that's probably the reason that the group titled its last disc Pieces of the People We Love -- because the band can't stop consuming its record collection.

Then again, the Rapture's true Achilles' heel has got to be Luke Jenner's neo-Robert Smith yelp. Jesus, is it annoying.