With Between the Buried and Me, Sharon Tate, and the Acacia Strain. Tuesday, August 2, at Peabody's. 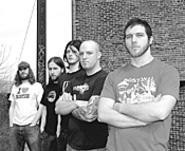 Given that the man-to-monkey transformation took millions of years, it's amazing how far hardcore has evolved in the two decades since the Gorilla Biscuits. Like '50s rock, early-'80s hardcore is so building-block basic that many contemporary bands dismiss it as antiquated. Groups salvage aspects of the classic sound, but they seldom revisit entire old-school song structures. On "Antman" and "Lay the Tarp," the Red Chord breathes new life into spoken/shouted vocals and chugging verses like a grease monkey lovingly restoring an old Mustang.

But this isn't a nostalgic novelty act. Surrounding its flashback tracks with power-metal melodies and death-gurgles, the Red Chord proves to be equally proficient at thoroughly modern heavy-music variations. The Massachusetts-based band even caps its latest release, Clients, with a dense instrumental epic -- the antithesis of vintage hardcore's bite-sized blasts of urgent sloganeering and rudimentary riffs. Regardless of subgenre classification, the band's songs are relentlessly aggressive and technically daunting.