Hollywood says the sky is falling. To which we say Puh-lease. 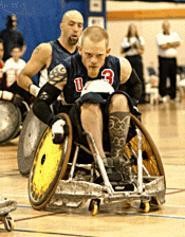 If you go to Rotten Tomatoes, the website that compiles more than 100 film critics' reviews each week, you will find at the top of the "Certified Fresh" list a single movie that was the very best-reviewed of 2005. It was not a remake or a sequel, nor did it cost $200 million and star a pubescent wizard or a computer-generated ape. It was a made-for-cheap documentary about men confined to scrap-metal wheelchairs who play a violent game of quadriplegic rugby, which involves rolling across gymnasium floors at high speed and hitting your opponent as hard as you can. If you knock him out of his chair, so much the better.

Titled Murderball, it was the darling of the 2005 Cleveland International Film Festival and was released in July to nearly unanimous acclaim; the execs at THINKFilm, the New York City distributor that put Murderball into theaters, had every reason to believe that audiences would run to a funny, furious movie about men who cannot walk. Before its release, one of its stars, Mark Zupan, appeared alongside Jay Leno and David Letterman, and was even touted on the cover of Entertainment Weekly as the summer's unlikeliest action hero. A&E Network bought Murderball for broadcast, MTV Films signed on as a promotional partner, and Reebok put up billboards pushing this latest extreme sport. And just a week before the movie came out, Participant Productions -- the socially progressive company owned by eBay founder Jeff Skoll -- partnered with THINKFilm to help give the movie a promotional push on the internet.

"If you had asked me and a number of people in this company and a number of industry observers what the box office would be," says THINKFilm's Mark Urman, "I think everybody would have predicted multiple, multiple millions for Murderball."

Instead, it made just one million -- $1.5 mil, to be precise -- during its three-month theatrical run. The shoulda-been hit missed by a mile, which stunned Urman. All the post-screening polling suggested it was universally loved: 99 percent of the men who saw it said they would recommend it; 100 percent of women said the same thing.

"The movie was going to be a big hit," Urman says. "Of course, that was a perfect illustration of what market research does. It tells you what you don't need to know and is often very misleading."

On the surface, the failure of Murderball would appear to render it one more casualty of The Year the Movies Died, a so-called trend trumpeted in newspaper headlines on an almost weekly basis. But don't weep for Mark Urman; the man ain't losing money, even on a money-loser at the theater. Welcome to the economics of Hollywood, where great apes and Jedi knights aren't the only computer-generated illusions.

Throughout the year, dozens of newspapers and TV news shows insisted that studio revenues were off 5 percent from the same period in 2004; some had it as high as 7 or 8 percent. The most commonly cited stat was that Hollywood had lost $500 million, give or take, for the first half of 2005 compared to last year.

Which wasn't true. At all.

Fact is, the major studios took in more from the box office in the first quarter of 2005 ($870 million) than they did during the first quarter of 2004 (when receipts totaled $797 million). How do we know this? Because Edward Jay Epstein reported it on the online site Slate, where he contributes a weekly column called "The Hollywood Economist." Epstein got his numbers from "a secretive unit of the Motion Picture Association" called Worldwide Market Research, which provides revenue breakdowns to the highest-level studio execs, but keeps those numbers away from journalists. Yes, Epstein says, audiences were down, but "this came mainly at the expense of independent, foreign, and documentary movies." The studios, he insists, suffered no slump whatsoever.

Epstein, whose book The Big Picture: The New Logic of Money and Power in Hollywood was published by Random House in February, has spent the better part of 2005 demystifying and debunking Hollywood's woes on Slate. He is no embedded trade-mag reporter, no Variety shill, but a writer of books on subjects ranging from the collapse of TV news to the Warren Commission to the diamond trade; he's a serious man of sober purpose. So his numbers ring true, as do his assertions that Hollywood is in the business of peddling myths not only for the big screen, but for business pages as well.

"The reason I have stayed on the subject all year is the inability or unwillingness of the media, of people who report on Hollywood, to try to get the real numbers and see what's really happening," Epstein says. "They have no willingness to accept that box office numbers are not the studio numbers. They treat it as though it's some sort of a joke . . . People say this film did this or this film did that, and it's like talking about how some clothing did at a fashion show rather than the retail store."

Spend an hour talking to Epstein, and he will run down his estimable list of myths promulgated by and about Hollywood. He will tell you studio execs hate making movies for kids, hate watering them down for the demo-pleasing PG-13 rating. "People in Hollywood are generally smart, thoughtful, and pretty nice guys . . . and if they make movies that are terrible, they're not doing it because they want to," Epstein says. "It's because their business is to find audiences, and the audience they can find the easiest are teenagers, and the only movies they can get merchandising tie-ins for are children's movies."

He will tell you that the real money comes from DVD sales, not from theatrical release. He will tell you that theaters would prefer to let people into movies free, so they can sell more popcorn and hot dogs and soft drinks, which is where exhibitors really make their money; but since studios don't make a cent from concessions, prices go up and audiences go down. He will tell you that studios don't really depend on foreign sales to make up their deficits; after all, the U.S. box office is still the dominant money machine, providing more than 60 percent in ticket sales worldwide. And he will tell you that even though Universal claims King Kong cost more than $200 million to make, it probably cost the studio next to nothing, once you figure in subsidies provided by the New Zealand government and German tax shelters and other pre-sold licensing rights. Telling audiences how much King Kong cost was just part of its pre-release hype -- a wowee stat aimed at impressing those who want to be part of a garish, expensive spectacle.

So, sure, the movies may have seemed terrible this year -- 2005 was, after all, the year of The Dukes of Hazzard, Bewitched, Be Cool, Domino, and other lavish disasters -- but there are awful movies every year, just as, in the case of Murderball, there are always critical darlings that tank with the public. If people are indeed staying away, it's because they just don't want to see any movies -- not now, anyway, not when they can avoid sticky and dingy multiplexes filled with ringing cell phones; not when they can spend the price of a ticket on a DVD 90 days after opening day; and not when they can see something on their plasma TV or computer screen or iPod whenever they want.

You don't even need a big hit to be a big hit: Mark Urman says that it just doesn't matter that Murderball did poorly at the box office, because he'll make his money elsewhere -- specifically, on DVD. (In that top-secret report Epstein cites, DVD sales for the first quarter of 2005 were up $550 million -- from $2.7 billion to $3.2 billion.) That's why Urman plans to start releasing DVDs mere weeks after the movies hit theaters, which saves him time and money pimping the product -- it all gets rolled into one giant ad campaign, after all.

Mark Cuban and Todd Wagner, through their production companies HDNet Films and Magnolia Pictures and 2929 Productions, are already doing that very thing. This year they released the doc Enron: The Smartest Guys in the Room in theaters and on Cuban's HDNet on the same day, which infuriated theater owners, who claimed that Cuban and Wagner were cutting into their business -- and yet it still made more than $4 million at the box office. And in late January, director Steven Soderbergh will simultaneously release his movie Bubble theatrically, on HDNet, and on DVD.

Not only are Cuban and Wagner shortening the release window between movies and DVDs -- they're jumping through it. But they can do this because they're a small company. The studios are lumbering, bungling beasts. It's easy to turn a speedboat on a dime; it's impossible when you're steering the Titanic.

"Paramount's biggest DVD last year was Chappelle's Show, which they established on Comedy Central," Epstein says. "One of Warner Bros.' biggest DVDs was The Sopranos, established on HBO. And Harry Potter was established as a book first. In the future, the theater will be less and less important, and [studios are] just trying to keep them alive. Everyone understands it's an inefficient system, but if they kill the theaters, they will kill themselves. If you try to open Syriana or King Kong on HBO or as a network special, like a Super Bowl, and all the publicity was concentrated on it that way, you may make more money. But they don't know." Epstein laughs, then adds with dramatic understatement: "You know what? They're scared."

But not broke. Not by a long shot.