The Renaissance of the Cuyahoga Riverfront Means Commercial and Recreational Interests Must Co-exist, Come Hell or High Water

The stately Sam Laud, a 636-foot, 7,000-horsepower Great Lakes freighter owned and operated by the American Steamship Company, is unloading 7,500 tons of iron ore at the Cleveland Bulk Terminal, just west of Whiskey Island and the mouth of the Cuyahoga. That's less than a third of its total cargo. The vessel has to reduce its tonnage before a precarious journey down the Cuyahoga River, or else risk damaging its hull or getting stuck in the mud of the undredged riverbed.

It's an oil-on-canvas Tuesday morning. On board the boat, Capt. Daniel Franklin is dressed comfortably in straight-leg jeans, a green polo and a ball cap. He says that commercial shipping on this particular river is a game of inches. The VP of the Lake Carriers Association, Glen Nekvasil, co-signs the sentiment by making a claw with his thumb and forefinger.

"This much," Nekvasil says. 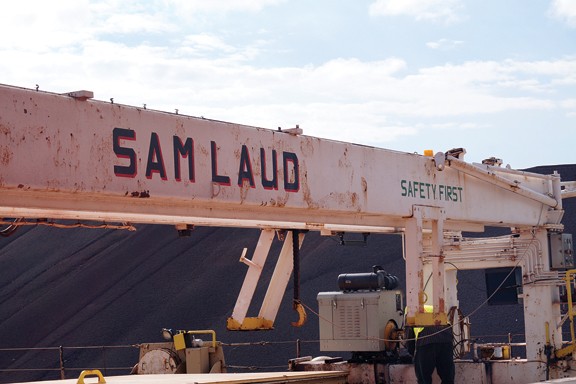 They're talking about the negligible inches between the bottom of the Sam Laud and the mud, but also about the precious few inches between the sides of the boat and the riverbanks, inches that shrink to practically zero when ships like the Laud navigate the upper Cuyahoga's infamous hairpin turns, the kind of acute angles that have the winding river travel about 100 miles just to make it 30. (The Sam Laud's 6-mile trip from the bulk station to ArcelorMittal will take three and a half hours.)

(You can see photos from the Sam Laud's incredible journey here.)

Great Lakes commercial shipping turns out to be a game of minutes, too. Massive lakers, which are about as long as the Terminal Tower is tall, move sluggishly even at top speeds. Industry improvements have for years focused on maximizing efficiency: It can cost $2,000 per hour just to keep the engines running. So in addition to the technical advancements that have reduced time and crew size — self-unloading technology being chief among them — companies have recognized that they're most productive (i.e., most profitable) when the boats never stop moving. Shipping is a 24/7 operation. Throughout the shipping season, which runs from late March through Jan. 15 ­— when the Soo Locks, on the St. Mary's River on the northern tip of Michigan's Upper Peninsula, between Lakes Superior and Huron, close — the bulk carriers pause only to load or discharge cargo. A few lost hours here and a few wasted minutes there mean fewer shuttles in the long run. It's the main reason why the maritime industry balks every time groups want to shut down waterways like the Cuyahoga River, even briefly, for competitions or events.

"It'd be like telling a trucker to take a nap for 10 hours," Interlake Steamship president Mark Barker tells Scene by phone.

Longer than that, if you want to get technical, given that a single 1,000-foot Great Lakes freighter hauls about as much cargo as 3,000 semi-trucks on the highway (a fact that industry lobbyists love to cite when championing the economic and environmental advantages of maritime shipping).

For the past few years, the Sam Laud's principal route has been from Silver Bay, Minnesota, down to Cleveland, shuttling iron ore that, along with limestone and coal, is the steel industry's key ingredient. This particular batch has come from Escanaba, Michigan, a port town on the Upper Peninsula. Franklin and his 21-man crew have spent the past 50 hours chugging through the waves of Lake Michigan, the Straits of Mackinac, the sweltering heat of Lake Huron in sunny skies, the St. Clair River, the Detroit River, and finally Lake Erie, before coming to pause here at the Bulk Terminal.

On deck, Glen Nekvasil adjusts his suspenders and calls it a "honey of a day," and it is.  At 10:49 a.m., shortly after the Sam Laud's 250-foot self-unloading boom has deposited the last pebbles of ore — the process is called "lightering," for self-evident reasons — and swung back to its resting place, Capt. Franklin, who is also the pilot, eases his ship ass-first out into open water. His plan is to swing her around in a sort of three-point turn, to approach the mouth of the river head-on.

"This is some of the most technically difficult navigation in the world," says Franklin, referencing the route ahead. "We're not using tugs out here. It's basically 6 miles of turns and twists and corners. Then you throw in sand bars and currents and everything else ... It's terrifying."

A: Recreationalists, soaking up a newly re-vamped waterway on kayaks and brew boats and dragon boats and standup paddleboards and jet skis and sculls. Many of them are responsible, regular river users. But others are unfamiliar with or agnostic about, if not actively hostile toward, safety procedures. Still others are drunk.

And though representatives from the shipping industry — Daniel Franklin among them — are careful to say how excited they are about the riverfront resurgence, how delighted they are to share the Cuyahoga with recreational users, and how wonderful it is for the city of Cleveland, what they seldom say outright is that they are also extremely nervous.

"There are more and more types of users on the water," says Jane Goodman, director of Cuyahoga River Restoration, "and it absolutely freaks out the lake carriers and the freighters. They don't want to kill anybody! And if anything happens, they're the ones who are going to get sued."

Mark Barker, of Interlake Steamship, says that the river serves multiple purposes, and though commercial interests don't always see eye to eye with recreational interests, it's important to keep a productive dialogue around safety going.

"It's very easy to say, let's shut down industry," Barker tells Scene. "And let's just enjoy the river and have a beer. A beer is good, and it brings dollars to town, but the raw materials that these ships bring — that ton of stone or that ton of iron ore — also bring really important dollars and really important jobs to the area. It also supports the tax base in a way that I'm not sure a beer does."

As the Sam Laud continues, the bright walkway of the Flats East Bank appears on the left. A battalion of crossfitters performs an aggressive, synchronized series of leg lifts. Early lunchers and late-morning strollers dot the strip. The Flats East Bank is the newest and largest example of development on the river, and maritime industry folks note that the recent projects feel markedly different than those of the Flats heyday in the 1980s and '90s.

"Back then," says Glen Nekvasil, "the Flats were the third most popular tourist attraction in the state of Ohio. Shooters, on weekends, brought in the third highest earnings per capita of any restaurant in the country."

Scene was unable to substantiate the above, but the description echoes others of a hopping and exclusively adult entertainment district. Strip clubs, dance clubs, cigarette boats, bars. The word most commonly used by industry folks to describe that era was nightmare.

"It was a logistical nightmare," says Mark Barker.

"It was a nightmare," says Nekvasil. "There'd be six or seven pleasure crafts tied up on either side of the river, and boats just couldn't get through. We'd have to call the Coast Guard or the Cleveland Police boats."

"The party-party thing wasn't sustainable, though," offers Jim Ridge, founder of Share the River, an organization that promotes a vibrant, engaged coexistence on the water. "The focus on eating and drinking came and went."

Franklin, who's been captain of the Sam Laud for four years, says that not only are there fewer pleasure crafts on the water these days (due, at least in part, to the money-tightening of the great recession), the spirit of the development has changed too.

"It used to be a little seedier," is Franklin's assessment. "Now, it's more holistic. Now you have this walkway: There are people jogging, fishing. You still have people having dinner and a beer, but people are living and working down here too. That's more sustainable in the long run."

But the challenges have by no means disappeared.

On Friday, June 3, the SS Calumet, another U.S.-flagged, 630-foot, self-unloading bulk carrier, collided with the deck at Shooters on the West Bank. No one was injured, but Shooters put the structural damage at about $20,000.

Rand Logistics, the company that owns and operates the Calumet, declined to comment when Scene inquired about the incident, but the Coast Guard is investigating. For a moment, the collision reminded people that enormous objects maneuvering in tight spaces are not only mesmerizing to behold — as anyone who's watched the slow waltz of a freighter from the safety of Nautica or the patio at Alley Cat can attest — they're also extremely powerful and can be extremely dangerous.

And that's when you're on shore.

"Thirty-six and closing," calls one of Dan Franklin's mates, monitoring the distance between the Sam Laud's portside stern cheek and the east bank bulkhead. On the starboard (right) side, the tenting of the Nautica complex shines titanium white in the sun. To port, the yellow Samsel Supply building inches closer and closer and ...

This is the only spoken communication up here on the bridge, a back and forth calling out of numbers, of distances. As navigator and pilot, Franklin needs constant measurements (in feet) as he massages the rudder's lever. He's got a radio as well, and a team up at the bow chimes in with the relevant distances on their end. Franklin reminds them at intervals that he only wants the closest distance.