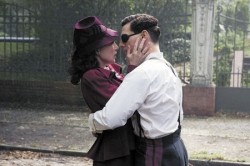 NEW YORK - When U2 plays "Sunday, Bloody Sunday," Bono often introduces it saying, "There's been a lot of talk about this next song. This song is not a rebel song." Valkyrie director Bryan Singer (The Usual Suspects, Superman Returns, X-Men) and star Tom Cruise recently echoed something approximating that sentiment as they sat in front of a throng of reporters at New York's Regency Hotel to discuss a movie that's been (unfairly) dubbed a "Holocaust film."

"I know there have been a few things written about this film before people have seen it - just a couple," says Cruise, before breaking into one of his characteristically uncontrollable laughs. "There are so many times I've been through this, and the Internet has accelerated this kind of drama. There's a perception out there versus what we're doing artistically. Even our friends who have seen it have been surprised to see it's a suspense thriller."

"This is not a Holocaust movie," he says. "It's a conspiracy thriller about assassinating Hitler. The bonus is that it happens to be true. Even things that you think might be Hollywood conventions that happen in the movie, and some of the twists and turns in the film, actually did happen." Singer's not exaggerating. Screenwriters Christopher McQuarrie (The Way of the Gun) and first-time writer Nathan Alexander went to great lengths to make sure everything in the screenplay was accurate or as close to accurate as possible, making sure that Hitler's signature was true to form and that his furniture resembled his actual furniture.

McQuarrie was working on another project in Berlin several years ago when he accidentally happened upon a monument to German Resistance fighter Colonel Claus von Stauffenberg, who had led an attempt to assassinate Hilter on July 20, 1944. Inspired by that little-known incident, McQuarrie and Alexander began to work on a screenplay that would capture the drama of that day, studying testimony and source material that would enable them to tell the story as faithfully as possible.

"When we finished the screenplay, we put it in a drawer and didn't show it to anybody," says McQuarrie. "We waited for the right interested party to come along. Bryan Singer got wind of this project and asked to read it, and called me a few months later and said he wanted to do it."

While the movie's conspirators are often cast as opportunists who felt like they could do a better job at waging war than Hitler, that's not exactly accurate. McQuarrie says Stauffenberg and company were not only interested in stopping the war, they wanted to close the concentration camps and show that they weren't all like Hitler.

Like McQuarrie, Singer tried to stick to facts. He studied old footage of soldiers saluting each other and used real World War II fighter jets - something that Cruise, who flies old planes, appreciated.

"In terms of the pageantry and the military aspects of it, we have those references, thanks to all the [Nazi] film material," says Singer. "We worked with the military advisors who could help us with the movements and salutes so we could have authenticity as to how a colonel would salute a major, specifically, at that time period. That all changed after the assassination attempt, where fascist salutes were more mandatory."

The assassination attempt led by Stauffenberg, who even carried a bomb in a briefcase to a meeting with Hitler, also included several key military members, including Henning von Tresckow (Kenneth Branagh), Friedrich Olbricht (Bill Nighy), Ludwig Beck (Terence Stamp), Erich Fellgiebel (Eddie Izzard) and Otto Ernst Remer (Thomas Kretschmann). (The supporting cast is one of the film's strong points since Cruise simply brings too much of a Top Gun/Few Good Men feel to the role of Stauffenberg.) While the outcome of the assassination attempt won't be a mystery to anyone who knows a little history, the story is suspenseful nonetheless. And for Cruise, playing a valiant anti-Nazi officer is a role he cherished, simply because it enabled him to relive childhood fantasies.

"I grew up wanting an adventurous life, and I've gotten sometimes a little more adventure than I bargained for," he says. "But this was something I didn't want to pass on. I grew up playing with the neighborhood kids in my yard and wanting to kill Nazis. The way this film is told and directed is not like anything I've seen. It's like these films I greatly admire - Schindler's List and Paths of Glory - but very different."