The RNC is Here, and Our Local Art Galleries are Flashing Political Exhibits 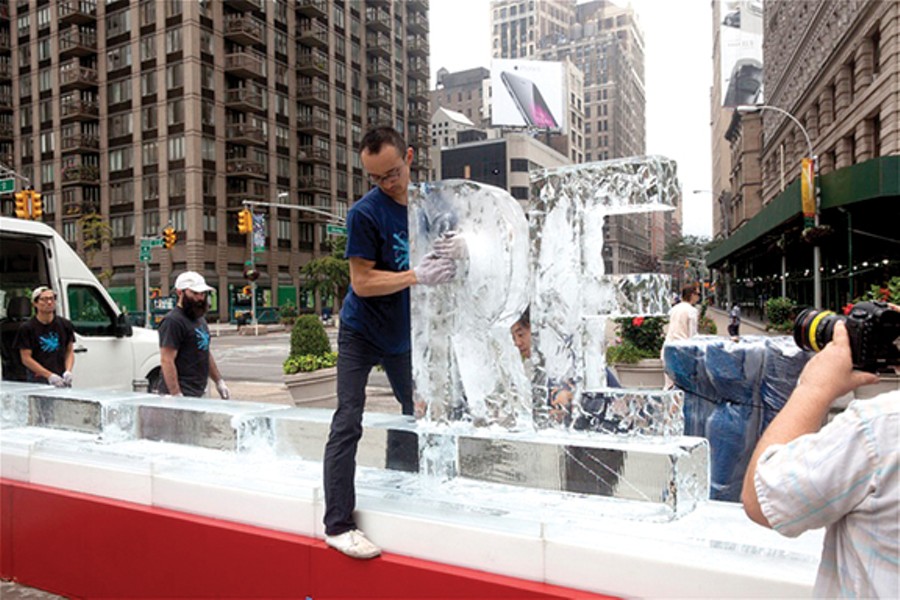 It seems everyone in the city is gearing up for the upcoming Republican National Convention (July 18 to 21), and Cleveland's art community is no exception. Exhibitions throughout the city range from nonpartisan to scathing critiques and just about everything in between. In advance of next week's convention, we've compiled a list of city's many RNC-related exhibitions and events.

Unsurprisingly, Spaces sets the bar high, hosting several politically themed exhibitions, installations and events. Through seven short films created by a collective of artists, filmmakers and activists, The Fixers allows cultural and community leaders to contribute to a deeper conversation at a crucial point in Cleveland's history. At 7 p.m. on Monday, July 18, the Bop Stop (2920 Detroit Ave.) hosts a screening of the entire Fixers series. A $10 donation is suggested, but no one will be turned away for lack of funds.

In addition to the highly anticipated local project, Spaces' resident artist Roopa Vasudevan (based in Shanghai and Brooklyn) presents her #Bellweather project, which will unfold during the course of her residency. Vasudevan will be in the gallery each Thursday evening from 6 to 8 p.m. and campaign buttons and bumper stickers are available. Additionally, Spaces' Vault features a selection of video and film works examining the election cycle, as well as a mini-retrospective of former Plain Dealer editorial illustrator Edward Freska's political cartoons.

For the younger set, Spaces hosts a Cleveland Kids Convention from 1 to 3 p.m. on Saturday, July 16, featuring maps, brochures and postcards entirely designed by local children. Families can create their own political cartoons, and kids can vote for their favorite presidential candidate.

Transformer Station hosts a special symposium structured around current exhibitions at its partner organizations, Spaces and the Rock and Roll Hall of Fame and Museum, as well as its own temporary public art installation, The American Dream, and co-founder Fred Bidwell's role in LAND Studios' Inter-Urban project. The symposium includes a series of panel discussions with artists, curators and members of the community. As for that American Dream art installation, it's a 4,000-pound ice carving which will vanish in just one day. During the event, street interviews will be recorded with the public regarding the project, and posted on meltedaway.com, where the event will also be streamed live. The free symposium and installation take place from 1 to 5 p.m. on Tuesday, July 19.

The Galleries at Cleveland State University present a large collection of election-themed graphic art produced by more than 300 members, medalists and influencers of AIGA, the professional association for design. Hundreds of posters fill the walls throughout the galleries. All member posters are available to print and share on social media to support and promote voter engagement initiatives. To see all posters available for download, visit aiga.org/vote. During the RNC, the gallery will be open daily from noon to 8 p.m.

This exhibition is part of a broad series of events and activities being hosted by the university during RNC week, including an RNC Cybersecurity Forum from 12:30 to 6:30 p.m. on Tuesday, July 19; TEDxSalon from 10:30 a.m. to 1 p.m. on Wednesday, July 20; and Conservative Thought and Environmental Sustainability from noon to 4 p.m., also on Wednesday. For a complete list, visit csuohio.edu/rncweek/index.html.

Gallery One Sixty presents Adam Sheetz's Nobody's Safe 2016 at 78th Street Studios (second floor, suite 215). Clearly a big fan of Hunter S. Thompson, Sheetz's visual style is inspired by gonzo artist Ralph Steadman, but with content updated for our current socio-political climate. Sheetz's new work furthers his sharp critique of socio-political issues during a time when these issues are impacting residents of Northeast Ohio more than ever. View the exhibition during Third Friday at 78th Street Studios from 5 to 10 p.m., July 15. To view the exhibition during the RNC, contact the gallery to set up an appointment.

Maria Neil Art Project hosts Michelangelo Lovelace's We the People, timed as a response to the RNC. Drawing inspiration from personal and social issues in his community, Lovelace estimates he has produced over 500 paintings throughout his career. A student of the late Rev. Albert Wagner, Lovelace is considered one of Cleveland's most accomplished folk artists. His paintings have been recognized with a Creative Workforce Fellowship, Cleveland Arts Prize Mid-Career Artist Award, and in recent exhibitions at MOCA Cleveland and 2731 Prospect.

Although not a traditional art exhibition, Louder Than Words: Rock, Power and Politics is a multimedia exhibit exploring music and musicians' roles in politics and social movements. The Rock Hall has partnered with Washington D.C.'s Newseum for the exhibit. During the RNC, the Rock Hall will be open from 10 a.m. to 3 p.m., and admission will be free.

Inter-Urban is a public and private collaborative partnership between the City of Cleveland, LAND Studios, Greater Cleveland Regional Transit Authority (RTA), Northeast Ohio Areawide Coordinating Agency, the Cleveland Foundation and Anisfield-Wolf Book Awards. The project sponsored large-scale murals and photography installations by 19 local and international artists throughout the RTA's Red Line. The term "interurban" comes from the Latin term, inter urbes, which translates to "between cities." LAND Studio received nearly 300 submissions for the project, and the selected artists were chosen by Fred Bidwell — local collector, philanthropist and co-founder of Transformer Station — and Hawaiian artist Jasper Wong.