Rosie Flores was the first Hispanic woman to make the country charts, so why can't she get a record deal? 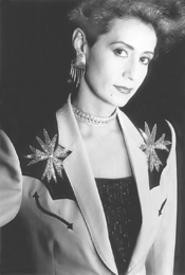 Rosie Flores received some sobering news from fans recently, after playing the renowned Gil Fest in Milwaukee along with rockabilly institution Sonny Burgess and his Combo.

"A couple of people said to us, 'Wow, the two of you are legends,'" says Flores via phone from her Nashville home. "Oh God, am I getting so old that I'm a legend? Sonny's all gray, and he looks like a grandpa, but I don't look like a legend, do I? I remember talking to Wanda Jackson about that once. I remember it always kind of bugged her. She said, 'I don't know why they call me a legend. I ain't dead yet.'"

While Flores might not be able to accept that mantle just yet, it's clear that her career exploits bear all the earmarks of a legend. As a teenager in San Diego, Flores picked up the guitar because she liked the novelty of being a girl guitarist. By the mid-'80s, she was packing clubs in San Diego as the front woman of Rosie and the Screamers, a precursor to the alternative country movement yet to come.

In 1987, Flores recorded her eponymous debut for Reprise, an album that stands up to this day as a classic blend of rock and country. It garnered wildly enthusiastic press nationwide, and she became the first Hispanic woman to hit the country charts. Sadly, Flores was so far ahead of all of the curves that Reprise cut her loose before making a second album, simply because they had no idea how to market her. Disappointed, Flores moved to Austin, Texas, where she put together an amazing band that featured git-steel master Junior Brown and bassist Terry McBride. Before too long, Flores was sharing stages and writing credits with the likes of Jimmie Dale Gilmore, Joe Ely, and Butch Hancock.

In 1992, Flores signed with Hightone Records, a suitably rootsy label for her genre-bending style, and over the next couple of years released a trio of incredible albums, toured with Wanda Jackson, and performed duets with Freddy Fender, Marshall Crenshaw, and Joe Ely. Eventually, Flores left Hightone and moved to Rounder, which reissued her first album with some unearthed bonus tracks, and last year released the critically acclaimed Dance Hall Dreams, featuring collaborations with Radney Foster and Terry McBride. Toward the end of the decade, Flores recorded with rockabilly giant Ray Campi and toured as a guitarist with Western swing greats Asleep at the Wheel.

"It's interesting to look back at where you've been and what you've accomplished," says Flores of her career arc to date. "In all the years I've spent my life touring and recording -- even though I've never made the big Grammy-ass stature -- I've really had a doggone good time doing it. I've made so many friends, and I've really cut out a little path for myself and gotten a name for what I've done. So that makes me feel good, when I think back on it like that. I look at Sonny and look at how much he's done -- he started back in the '50s. He still has that fire in him; it gives me hope that that never goes away -- that you can still get onstage and rock out, and have music fill you up that way."

Flores is certainly in no danger of losing that passion anytime soon. Throughout her industry and career travails, she has remained an engaging and driven guitarist, songwriter, and performer, eager to make the next record and the next show better than the last. And even though she has managed that astounding feat time and time again, Flores still finds herself on the fringes of the music industry.

Flores's current dilemma is, once again, a matter of labels. For the fifth time in her career, Flores has parted company with a record label that should have been perfect for her. Rounder's reissue of her first album, coupled with the release of Dance Hall Dreams, should have been the tonic for her career, but neither release lived up to the expectations of either the label or Flores herself.

"Dance Hall Dreams didn't sell as well as I had hoped," Flores says with a touch of understandable sadness. "Maybe that was not having the right marketing plan, or maybe me not getting out and touring enough in the U.S. It certainly wasn't because it wasn't a great record. Quite a few fans that I hear from on the Internet and through letters think that it's my best record. So I'm really proud of it, and I think that I've matured as a writer, a producer, and a guitar player. I feel growth in myself. Things are becoming easier and less stressful."

So Rosie Flores keeps the faith as she continues to work the club and outdoor festival circuit this summer and fall. She's writing new songs in anticipation of signing with a new label and hopes to have a new album out by spring of next year.

"I'm not in the studio now; I won't go in until I get an advance from whomever I sign with," Flores says. "I'm not independently wealthy; I can't just start working on it. But what I can work on and have been working on since '98 is new songs, and I work on those all the time."

The other major project occupying her time is a book that she's in the midst of writing that documents bizarre stories from the road, as well as the strange and plentiful supply of candy that she's found at truck stops over her 20 years of touring. She hopes to finish the book, entitled Wacky Truck Stop Candy and Road Stories, by the end of next year.

"It's all about when you stop for gas and a pee," says Flores. "You can find some pretty interesting things out there in the sugar world."