An embezzlement scandal closes in on top diocese officials. 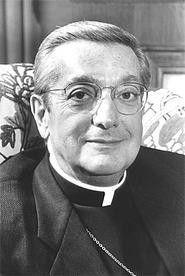 For Cleveland Catholics, it's getting harder to take the words of top priests on faith.

While a $17.5 million embezzlement scandal plays out in court, the fighting has reached the highest ranks of the diocese -- and appears to be closing in on former Bishop Anthony Pilla and the diocese's former chief accountant, Father John Wright.

It began in 1997, when ex-CFO Joseph Smith and Anton Zgoznik are alleged to have begun a massive kickback scheme. The U.S. Justice Department claims the two men steered $17.5 million in diocese funds to Zgoznik's companies, which in turn kicked $784,000 back to Smith for "consulting."

Since 2004, when the scandal forced Smith from his job, Pilla and Wright, the longtime head of the diocesan Financial Office, have generally invoked a "we trusted unscrupulous individuals" brand of defense. But lawyers for Smith and Zgoznik say their clients were merely following orders from the two priests.

Now the gloves are coming off.

Defense attorneys want to subpoena financial records from the diocese and other institutions connected to the case. At issue is whether it was common practice for church leaders to use off-the-book accounts to reward valued employees. It's an argument at least partially supported by the feds.

Philip Kushner, Smith's lawyer, also asserts the diocese used creative bookkeeping to pay Wright, his friends, and relatives over $700,000, and that Pilla had his own secret account in excess of $500,000 that "has never appeared on the [diocese's] books and records." The "Anthony M. Pilla charitable account," as it was called, was used for large cash withdrawals by the bishop, according to Kushner.

In a church press release, Pilla calls the accusations "scurrilous." Smith and Zgoznik "have resorted to false statements, half truths, and innuendo against [Pilla and Wright]," says the statement.

The U.S. Attorney's office has filed motions to halt the release of diocese financial data. Church lawyers are also trying to suppress the request.

But for a church widely stung by the secrecy -- and subsequent payouts -- of its massive pedophile scandal, attempts to once again bar a public viewing of the diocese's inner workings have a familiar ring.

"I would think that when you're a large, nonprofit religious organization, that you'd want all your parishioners . . . to know precisely every detail of the financial transactions you've ever made," says Robert Rotatori, Zgoznik's lawyer.

In the meantime, the revelations just keep getting worse for Father Wright. On March 15, Rotatori filed a motion that singles out Marilyn Ruane, an employee of the Catholic Cemeteries Association. (Church officials refuse to say what Ruane's job entails.) Wright, who now heads the CCA, described Ruane as a "friend" in a 2005 interview with prosecutors. He also admitted that he helped the woman get a job at Resultant Corporation, a company that did unexplained business with the diocese.

Rotatori asserts that Wright arranged for Resultant to be paid over $290,000 through Zgoznik's companies between 1997 and 1999, "in large part for [Wright's] personal purposes." The motion seeks Resultant's financial records to establish how much of that money went to Marilyn Ruane.

According to a Justice Department interview with Zrino Jukic, an associate of Zgoznik, "Ruane . . . was on the payroll at Resultant Corporation, but didn't work there."

More to the point: "Ruane was Father Wright's girlfriend."

That may explain why, according to Rotatori, Ruane made $31,500 when she started at Catholic Cemeteries in 1997, but had catapulted to $81,000 by 2004. If the raises seem a bit outsized for a religious entity funded by the dollar donations of little old ladies, Ruane isn't talking. "I really don't want to comment about that," she said sweetly when contacted by Scene, "but thanks so much for calling."

Wright's lawyer, Kevin Spellacy, calls the girlfriend claim "a cheap shot," saying it's unfounded. But when asked expressly if the claim is false, he declined comment and refused to put the direct question to Wright.

In the meantime, Catholics are left to wonder if the same men who ran the pedophile cover-up were draining the collection basket in their spare time.