The Sky's the Limit

Inspiration takes flight in the paintings of Jon Schueler. 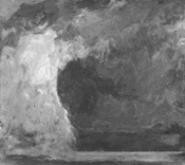 After many years in eclipse, the work of Jon Schueler is returning to the spotlight. The artist, who died in 1991 at the age of 75, isn't among the best-known abstract expressionists, though he's never lacked supporters. For example, Edward Henning, the Cleveland Museum of Art's former chief curator of modern art, paired Schueler's work with that of Milton Avery and Mark Rothko in a 1975 exhibit. Jon Schueler: About the Sky, the new retrospective at the Reinberger Galleries of the Cleveland Institute of Art, is about a master colorist who did for the sky what Monet did for gardens and water lilies.

A member of the second wave of abstract expressionists (Jackson Pollock was the Patton of the first wave), Schueler didn't paint until he was 29. Before then, the economics major and devotee of English literature was a navigator in the 303rd Bomber Group during War World II (at his discharge, he was a first lieutenant). He was also a failed author and a failed nightclub owner. Soon, his first of five marriages would collapse. He began painting as a lark, but under the guidance of Clyfford Still at the California School of Fine Arts, he began to develop a voice. Unlike so many postmodern artists (David Salle is an example) who seem merely to create art about art -- a brand of creativity that comments on itself, criticizes itself, and then congratulates itself for doing both these things -- Schueler was engaged in the world and strove to capture it through the prism of his own intuitions.

That he took this confrontation with the world seriously (and by seriously one doesn't mean long-faced) is amply evident in his richly textured work and also his verbal statements, of which this might be the most characteristic: "When I speak of nature, I speak of sky because the sky has become all of nature to me." Spoken like a true bomber navigator (that job, as more than one commentator has noted, would have required a fine-tuned sense of the weather and cloud formations), but also like a poet who was concerned with squeezing the larger significance from life experiences. That combination of practicality and inspirational flight is a constant in the best work here.

In a Schueler painting, one is not impressed with drawing skill. His forte was not in defining shapes through a mastery of line. Rather, what impresses is the way that colors meld into one another almost imperceptibly. He builds up shapes by varying pressure, by controlling the application of paint so that minute differences in color and texture become significant events. In musical terms, Schueler is less concerned about developing his material than he is in repeating it by constantly giving it new harmonic and instrumental guises.

In a work like 1958's "The Sun," he's allowing us to do something that we would never otherwise do -- look straight at the sun without dark glasses. The yellows are subtly varied in intensity, and Schueler intersperses some unevenly distributed passages in deep orange and pink that set up a kind of irregular rhythm. The more one looks, one realizes what he's getting at: This is what the sun and the surrounding sky might look like if we could really look at it unaided. It wouldn't just be a massive yellow blur, but a combination of colors that have melded into one another. The same idea is at play in "Silver Wing on Gray," a 1980 oil that, this time, contrasts a predominantly white and gray smoke-like ground with irregularly shaped bluish and brownish patches that barely peek through. Here the viewer seems to be looking at a dense cloud formation behind which there are tiny glimpses of clearer territories. All this emphasis on the emotional nuances that the artist can get by introducing variations on an almost uniform surface requires technical skill. However, this skill would go to naught if the work didn't register on an emotional level. That's the tough part -- to make these transformations emotionally compelling. Mark Rothko had this gift (some of the work here is indebted to him), and Schueler had it, too.

This, interestingly enough, is not the Jackson Pollock way of doing things. For Pollock, the changes of texture in his twisting, winding drips were supposedly mirroring shifts in his unconscious as he was creating the work. Schueler improvised, too, but the boundaries are far more defined. Pollock let it all out on the canvas -- the bile, the brilliance, the bravado. Schueler recollected emotions in tranquility and then methodically set them down. Schueler was a classicist whereas Pollock was a romantic.

The gallery is displaying a videotape along with the exhibit, which allows us to watch Schueler as he creates one of his paintings. There are dissolves during the film, marking different steps in the creative process, but still one gets a sense of the deliberateness of the artist's process. He starts with some agitated, convulsive movements, and the initial shapes are jagged. Slowly, the layering process begins, and the jagged shapes are partially submerged in hazy, billowy shapes. Here is where the attention to color gets full play, as the coloring goes through endless minor alterations until Schueler is satisfied that the combinations are suitable. By contrast, watch Pollock in similar tapes. He's like an orchestra conductor, a boxer doing shadow punches in the gym, and a fisherman casting out the line. He is all of these things all the time. The intensity rarely lets up.

Schueler, like most talented artists, had periods of intense creativity that yielded work of unusually fine quality. The mid-'60s, particularly the work done around 1963, if one goes by this exhibit, were a good vintage. A 1963 oil painting, "Loch Eishort: Winter Dream," takes the basic process familiar from earlier works and applies it here to tempestuous effect. A slim horizontal band of blue running along the bottom of the frame is offset by what looks like a seething red storm cloud at the far left and an agitated nightscape at right. This has got to be a dream -- storm clouds do not normally look so red and angry, unless it's a firestorm you're talking about. This work, agitated though it may be, is still somehow serene as a totality. That horizontal line of pure blue is undisturbed by all this activity. It acts as the painting's emotional center, and thus one senses that the turbulence will soon pass. In his works from the '70s, the turbulence is all gone, and there is a serenity that shows Schueler at his most characteristic. The control of color is so keen that one feels that, at this very moment, the clouds on canvas are being captured in the process of reforming and recombining. Think here of a medieval trickster who has succeeded in an impossible task: keeping objects in a juggling act suspended in air against the laws of physics. Monet did something similar with his water lilies (which always seem in the process of changing color, because the light that hits them is in the process of changing).

Schueler at his best (assuming this exhibit is representative of his output) combined the coolly sensuous color and poetic blurring of French impressionism with abstract expressionist jazziness. The results are distinctive, and for that reason, this fine retrospective is well worth the time for anyone who cares about postwar American art.