The Songs Remain the Same 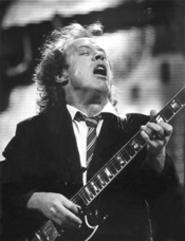 In advance of the AC/DC concert April 6 at Gund Arena, we ran a small item in which one of our writers argued the band's creative energy had waned. He suggested that the group has been rewriting the same song over and over since, say, 1980's Back in Black. In response, we got a phone call from the singer of a local AC/DC cover band called Bonfire, who took issue with the article. "If any of you people down there even play one stitch of music, I would love to see it, so I could give you a nice fucking -- oops, excuse my language -- a nice editorial," he said in a voice-mail message for us. "You guys don't know your butts from your heads, because AC/DC is probably one of the greatest rock bands in the world. And will always be. If you ever write an ad about AC/DC like that again, you should really put your head in the toilet and flush it, because there's no reason for you to be writing anything. Okay?"

With that stern warning ringing through our head like hell's bells, we went to see AC/DC at the Gund. We prepared for the concert the only way anyone should: by doing shots of Jägermeister and double-fisting Bud Lights as fast as we could, until the Gund stopped serving them at the sinfully early hour of 9. We even contemplated buying the blinking red devil horns, which were so popular they lit up the arena like an airstrip. And when the band opened with "You Shook Me All Night Long," we thought we had died and gone to hard rock heaven (or maybe it's hell, considering, as AC/DC once put it, "Hell ain't a bad place to be").

Wearing a crimson velvet schoolboy outfit not unlike the one he wore over 25 years ago, when he started the band at the impressionable age of 15, guitarist Angus Young pranced around the stage like a wound-up toy, and singer Brian Johnson welcomed the crowd by saying, "It's always good coming home, isn't it?" Between the 50-foot statue of Young that blew smoke through its nose and the deafening guitar riffs that smoked through stacks of Marshall amplifiers, we were initially so blown away by AC/DC that we even considered getting a physical exam to determine whether we really knew our butt from our head -- and once we had that straightened out, perhaps we'd even consider flushing the appropriate body part down the toilet.

But then, after the third song, "Shot Down in Flames," it started happening: The power-chord intros all began to sound the same. Was that the opening to "Thunderstruck" or "Stiff Upper Lip"? Without any prompting, a drunk chick wearing an AC/DC shirt grabbed our notepad and started writing. While it's generally a faux pas to wear a shirt advertising the name of the band you're going to see, we had to cut her some slack, because the majority of the audience was garbed in faded AC/DC shirts. And when we deciphered her nearly illegible scribbles, we discovered we were on the same page.

The drunk chick suggested that we weren't wrong after all. AC/DC does recycle its power chords, and even its fans know it. When we gave it some thought, we began to wonder how many times the band had turned in the same performance, greeted the crowd with the same familiarity, and gone through the same moves. After all, Young performed the same striptease he did when AC/DC played at Gund Arena eight months ago, on what it was then calling its final tour. (Young has always mooned the crowd, but now he's mature enough to show his boxers instead of his bare ass.) It was at that point that the repetition of the whole affair became painfully evident.

"Dear AC/DC," the drunk chick continued. "You know I think you really got it right when you played 'Shot Down in Flames' for the 12th time. Well, at least the statue looked cool. As far as Angus, I understand how an elderly man would not want to show his ass, but it was a bit of a disappointment. Hey! I have an idea! How about if you play 'Shot Down in Flames'?"

Rote renditions of "Shoot to Thrill" and "Rock and Roll Ain't Noise Pollution" only confirmed our suspicions that the band was following a formula that had barely changed after three decades and 17 albums. For "Hells Bells," Johnson swung from a giant bell that rang so loud, we noticed Michael Stanley (sitting a few rows in front of us) had to adjust his earplugs. But once again, it was something we saw back in August when the group played in town.

AC/DC closed the show with three of its biggest songs -- "Back in Black," "Dirty Deeds (Done Dirt Cheap)," and "Highway to Hell," all delivered with fist-pumping fervor. And for the encore, it played "For Those About to Rock" and fired off the cannons, as it always does. The fact that this may or may not be the Australian group's last tour isn't really cause for alarm. This formula is so simple, anyone can make it work. Even those guys in Bonfire.