Reese Witherspoon goes home to Alabama, and it ain't sweet. 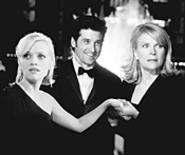 So that there's no confusion, be it known that the star of Sweet Home Alabama is Reese Witherspoon, who graces the film's poster in full-body pout and appears on the press kit in closeup mug-shot smirk -- any closer, and we'd shoot up her nostrils and exit through her pores. Of course, there's a great deal of wisdom behind Buena Vista's marketing strategy: Witherspoon is Hollywood's new $15 million girl, a price befitting anyone who could take a bound-for-video-stores, pretty-plain-even-in-pink movie like last year's Legally Blonde and turn it, single-handedly, into a $100 million blockbuster. Critics, male and female alike, doused the movie in gasoline, but slathered whipped cream upon the 26-year-old Witherspoon: "The thinking guy's cupcake," gushed Salon's female critic; "a sharp, quick-witted Doris Day for our drab age of screen comedy," drooled a fellow over at The New York Times. It says plenty about the wretched state of the studio movie business that critics would trash a movie as slight and insipid, but recommend it nonetheless because of a single performer buried beneath so much drivel; but that's Legally Blonde, a film so awful, they're making another one. Till then, here's more cud to chew on.

Yes, Witherspoon's a sharp cupcake, a thinking guy's Doris Day -- or plain "yummy," according to another writer, either from Maxim or The New York Review of Books, I forget which. Why, then, does this cupcake keep starring in movies as bad for you as a plateful of Twinkies? Maybe she's a Ding-Dong. Certainly, Sweet Home Alabama is loaded with empty calories, and it's plenty stale -- anyone remember Doc Hollywood, airing on cable TV ever since George Bush (the original, not the sequel) got into office? Of course you do, which is why you'll adore Sweet Home Alabama. It contains the exact same plot -- big-city dope can't drown out the beating of a small-town heart, or something -- and features this week's It Girl, doing whatever it is that makes otherwise rational people get excited about moving pictures with sound.

Here, Witherspoon plays Melanie Carmichael, an up-and-coming New York fashion designer whose clothes, it is said, will make Stella McCartney kill herself. Hers is the perfect life. She possesses a perfectly appointed apartment (she's not even shocked to find it one day littered with rose petals), works with a cadre of hipsters that NBC would love to cast in their own Thursday-night series next fall, and is engaged to Andrew (Patrick Dempsey, who played John F. Kennedy in a 1993 mini-series and now looks frighteningly like JFK Jr.), the son of New York City's mayor. Andrew's the kind of guy who rents out Tiffany's when it comes time to propose; the movies are special like that, you see, lifting us out of our own mundane, bill-paying lives and dropping us into the opulent and extravagant existences of folk so rich, they have their pick of any thousand-karat diamond in the joint. Sooner or later, some studio will simply film a director burning hundred-dollar bills for two hours; it will break all box-office records.

Melanie has but one flaw: bad roots, the kind L'Oreal can't cover. She hails from a podunk town in Alabama, which worries her future mother-in-law (Candice Bergen, apparently reprising her role from Miss Congeniality), who keeps referring to Melanie as "that Carbuncle girl" -- a line that somehow manages to elicit a chuckle from the audience. Worse, Melanie never quite ended her first marriage to childhood sweetheart and soul mate Jake (Josh Lucas), a chicken-fried hunk with a heart of glass who won't sign the divorce papers, despite the fact that he now considers his would-be-ex little more than a "hoity-toity Yankee bitch" (again, big laughs). Just why he won't sign the papers is something of a mystery -- or would be, in the real world; in movieland, it's a convenient plot point that pays off at film's end, around the time Andrew and Melanie are traipsing down the aisle . . . or are they?

You know where this thing's headed -- something about the promotional tagline, "Sometimes what you're looking for is right where you left it," gives it away, dunno what -- which means that the ride to the inevitable destination had better be enjoyable or at least a little scenic. But it can't be, in a film populated by yahoo stereotypes who appear to have been lifted from failed TV pilots: Fred Ward as the proud pop obsessed with Civil War reenactments; Bergen as the snooty bitch inexplicably covered in boils by film's end, suggesting a whole lot of deleted scenes somewhere; a closeted small-town gay guy and the black New York fashion designer who will, likely, make him a man. Which leaves Witherspoon, that delicious pastry, to heave the movie onto her own small shoulders and carry it home. The load is light -- the movie weighs no more than a glass of flat champagne -- but even she can't withstand the burden. No one can, when saddled with such lines as "You know, I never understood that expression, but, no, I am not shitting you." No, of course she isn't.