The story of the M.I.T. card-counters, 21 is a total bust 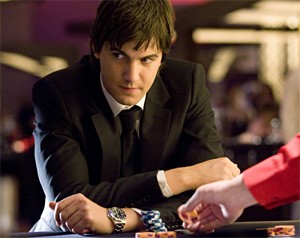 Ben Mezrich's 2002 best-seller Bringing Down the House: The Inside Story of Six M.I.T. Students Who Took Vegas for Millions was a smart story about . . . well, you saw the subtitle. Mezrich basically recounted a fantastic tale spun by an old acquaintance from Boston, an M.I.T. grad named Kevin Lewis. Lewis was a new member of the so-called M.I.T. Blackjack Team, which, by the mid-1990s, had been in existence for some 20 years as a way for the whiz kids to hoover up easy dough by counting cards in Atlantic City and Vegas. Their leader was a former prof named Micky Rosa, who, turned out, was as much bastard as brother in the operation.

Mezrich's position was both enviable — he had in his possession a true-life thriller, the story of a perfectly legal heist conducted by high-rolling brainiacs — and a little disagreeable, since he had to explain how to count cards without sidetracking his tale into a math-quiz ditch. But he succeeded — with the help of nerds all too eager to share tales of their heroic swindle.

21, the big-screen version of Mezrich's book, is no gamble at all. It's as though director Robert Luketic (Legally Blonde, Monster-in-Law) adapted the book-jacket blurb rather than crack the spine. They've excised the story's genuine thrills and filled in the blanks with blanks, chief among them a drab Jim Sturgess as dreary Ben Campbell, the newbie among the wizened ranks of card-counters.

Sturgess, last seen reducing Beatles songs to mush in Across the Universe, is about as far from Kevin Lewis as a leading man can get. Kate Bosworth is the hottest mathlete in history, but together they generate all the heat of two ice cubes clinking around an empty highball glass. And that pretty much sums up everyone and everything else in 21, a movie about Getting Away With It in the glitzy and glamorous digs of Vegas' schmanciest casinos that miraculously ends up a total bore.

That's partly because it doesn't have the slightest interest in informing the audience precisely how the M.I.T. Blackjack Team pulled off its scam. It reduces the explanation to a flash-card primer that describes the team's system in code words: "Car," for instance, means the deck is plus-4, while "magazine" means it's plus-17 — which means . . . sorry, couldn't tell you, because this movie takes no interest in explaining its own premise. Which is why movies about gambling seldom work: No one wants to spend an hour going over the rules, but you need to understand them before you have fun breaking them.

Which leaves us instead with the characters to consider, a forgettable batch of whozzats and whasshisnames: Jill (Bosworth) is the cutie who lures desperate Ben, who's in need of $300,000 for med school. Fisher (Jacob Pitts) is the hothead hotshot in need of a time-out. Choi (Aaron Yoo) flashes cash without seeming to make much at the green felt. And Kianna (Liza Lapira) is the other woman on the team, who also doesn't seem to serve much of a purpose. In fact, Ben's the only one who makes the team any money — which begs the question of how it's functioned this long as a profitable enterprise, given his relative newcomer status.

And then there's Micky Rosa, elevated from shadowy ex-prof to tenured lecturer and played by Kevin Spacey (who also produced). Rosa's the kind of character Spacey can play in his sleep — and ours, at this late date. He's the slick and kindly mentor prone to fits of rage, especially when Ben back-seats his intellect during one tense session and drains off a few hundred thou while playing with passion — or as close to passion as Sturgess can muster. But even on cruise control, Spacey's a wild ride, the sole glint of life in an otherwise pleasureless film.