Thursday, January 17, at the Agora. 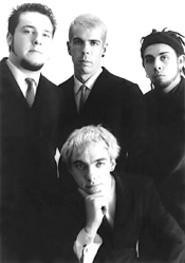 Detroit's Suicide Machines are hyper-aware of the toxic punk heritage that seeps like a plutonium leak from the Motor City's storied musical archives. Since the early days of Iggy Pop and Fred "Sonic" Smith terrorizing the city's streets and stages, few bands have had the chops, the volume, or the attitude to maintain the legacy of the dirty old masters. But with the release of their amazing fourth record, Steal This Album, the Suicide Machines, named for Dr. Kevorkian's magic boxes of mortality, have stepped up to claim their place in the city's legendary punklore. While the Machines' first three albums documented their ability to master any sonic direction that they choose -- from ska to pure punk to melodic pop -- Steal This Album is a return to their raucous punk roots, with touches of sweetness in their streetness.

But while the Machines may be adept at style-shifting in the studio, when they take the stage, it's all punk, all night. Don't be fooled by their high-octane, tightly wound cover of R.E.M.'s "It's the End of the World as We Know It"; when the lights go up, the Machines' mosh pit is clear evidence of a raw power the likes of which hasn't been conjured by a Detroit band in decades.