With Damien Dempsey. Sunday, May 11, at the Allen Theatre. 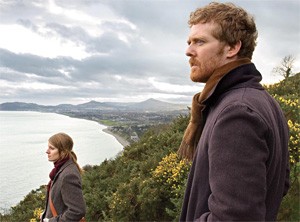 There's a scene in Once, last year's indie hit about struggling musicians making beautiful music together, where the film's two stars — touring together as the Swell Season — use a skeletal frame of a song to feel each other out in a music store. It's a pivotal and glorious moment, and one that audiences undoubtedly hope the Swell Season will repeat onstage. Of course, the band can't replicate that magic. These aren't fumbling-through-the-chords newbies. Glen Hansard, the mastermind behind Once's songs, has led one of Ireland's best bands, the Frames, for years. And co-star Markéta Irglová has been at this ever since the movie made her and Hansard indie and Academy Award darlings. Still, that doesn't take away the splendor of songs like the Oscar-winning "Falling Slowly."