The Thrill Is Gone 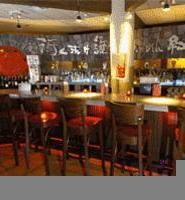 Other than announcing the seasonings as he applied them -- "Salt!" "Sesame seeds!" "Soy!" -- our lunchtime teppanyaki chef at Beachwood's Benihana was no entertainer.

Maybe he was just having an off day; maybe he was saving his ammo for the dinner crowd. Still, it was sort of a letdown. On those rare occasions when we get a hankering to gather 'round a hibachi table with a group of strangers, that kitschy, showbiz jive is just what we're seeking.

After all, while hibachi restaurants were the very pinnacle of adventurous dining during the mid-1970s, those days are long gone. Today, no matter what cute names the restaurant attaches to its stir-fried, prix fixe dinners (at Benihana, "Splash 'N Meadow," means shrimp and steak), the food is almost entirely predictable.

It goes like this: a mild broth, an iceberg-lettuce salad with sesame-ginger dressing, some quick-seared shrimp, steamed rice (or, for an extra charge, a stir-fried version), and a toss of tender-crisp veggies. For the main course, it's meat or seafood in various combinations. And for dessert, orange sherbet.

Benihana follows the same old program, with a few highlights. Its mild broth, for instance, is piqued with sheer mushroom slices and fried onion bits. And while chicken, shrimp, scallops, lobster, and several cuts of beef are the standard proteins, Benihana also offers calamari, tuna, and even noodles.

We tried the yakisoba version, with thick, spaghetti-like pasta, diced chicken, and shredded cabbage, stir-fried and tossed in a light, almost fruity "special sauce." Considering that it came with a heaping mound of fried rice, the meal was a carb-counter's nightmare, but the noodles' sleekness and slight sweetness were dreamy.

Meats and seafood were tender, their flavors true, and portions generous. And while our chef may not have been a showman, he was certainly agreeable, addressing guests' special requests -- no mushrooms, or double the sauce -- with smiling efficiency.

So even if the show -- or, as Benihana's corporate publicists like to put it, the "eatertainment" -- was a bust, at least the food was tasty and satisfying. Besides, it gave us a chance to check out the newly remodeled interior.

Founded in 1974 as the Samurai, the below-ground space was taken over by the international Benihana chain in 1997. Completed in May, the much-needed makeover shut down the restaurant for more than six months. When it reopened, the dark, dated '70s-style decor had been replaced by a cool, contemporary design of stone, poured concrete, and stainless steel, dressed in red, black, and vibrant greens.

Twenty-two dramatically lit hibachi tables -- each equipped with a quiet, shiny exhaust hood -- snake around the room. In the center, a circular, semi-enclosed space contains the cocktail bar, with a menu of sake, beer, wine, and tropical drinks, along with a sushi bar offering a routine lineup of maki and nigiri sushi and sashimi.

This sushi lounge was our destination during a second visit that started off with a sweet, nonalcoholic banana-berry smoothie for a younger companion, and for me, an Ocean Blue ($6.50), allegedly made with sake, blue curaçao, triple sec, and pineapple juice. I say allegedly, since I suspect my companion got more of a buzz from the sugar in her nonalcoholic smoothie than I did from my tiny, unimpressive cocktail.

And speaking of unimpressive, for a spot competing with nearby destinations like Shuhei and Sushi Rock East, Benihana's take on the sushi "experience" is remarkably banal, with a mid-sized selection, prosaic presentation, and a dull soundtrack of 1970s and '80s pop music playing in the background.

True, prices are set a few pennies below Sushi Rock's, but portions are smaller too. And even on a quiet Thursday evening, when the sushi bar was empty and the surrounding tables nearly so, it took more than 30 minutes for our orders -- a simple vegetarian roll, with avocado, cucumber, and tomato, and a basic combo platter, featuring a large California roll, along with six petite pieces of nigiri sushi (tuna, salmon, yellowtail, snapper, unagi, and octopus). Its quality was unmistakable, but the lack of accompanying razzle-dazzle was a bummer.

Then again, maybe that's our hang-up with spots like Benihana. Like the '70s themselves, they were fun at the time, but measured against modern standards, they just seem sort of boring.