Or: Why winning an Oscar sometimes means losing sight of a career 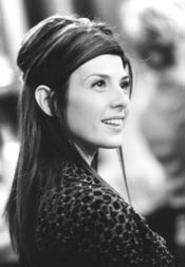 Until this moment--this shrill outburst that comes out of nowhere and startles both interviewer and subject--Marisa Tomei had been speaking in hushed tones, like someone making funeral arrangements. Every so often, she would punctuate her sentences with giggles--some nervous, some delirious--but suddenly, she is laughing uncontrollably like someone so amused with herself she barely notices anyone else in the room. The conversation up to this point had been about one thing, more or less: What the hell happened to Tomei's career? She even started the interview by griping about the lack of good romantic comedies, the dearth of good roles; she was hinting that she has made bad choices and that others have made bad choices for her. She was trying to explain the unfathomable: Why did a woman who won an Academy Award only a few years ago disappear in a list of films that gather dust on video-store rental shelves?

Then, suddenly, it hits her.

"I'm retiring! Hangin' up my crown!" She begins giggling again. Her legs dangle over the arms of her oversized hotel-suite chair. Her mouth opens wide, as though she's been punched in the stomach, and out spills a high-pitched laugh that bounces around the room until it dulls to an echo. One is tempted to look around for a camera.

This is why it's a bad idea to interview actors. They are always on stage, in front of the camera, playing to the cheap seats. So much drama, especially when they have to recite their own lines and not those penned for them. Just a few minutes earlier, Tomei had been talking about why she wanted to become an actor, and why her profession of choice had let her down. She was talking about how she wanted to be one of those honest actors, revealing great truths while wearing someone else's clothes and speaking someone else's lines and standing where someone else told her to stand. "It's me expressing myself through a character," she insists, "and I get to be honest through this character."

Only, she is explaining, she's never had that chance, not really. Maybe once or twice, she says: in My Cousin Vinny, for which she won the Best Supporting Actress Oscar for her turn as a loudmouth New Yawkuh, or A Brother's Kiss, a small 1997 film directed by her friend Seth Zvi Rosenfeld. But with the exception of a handful of big, fleshed-out roles in small, little-seen films (among them The Perez Family in 1995, Welcome to Sarajevo two years later, and 1998's Slums of Beverly Hills), her filmography reads like The Movie Channel's late-night lineup. It's pockmarked with films that made pennies on the dollar, movies that were released on video and on airplanes (where, rumor has it, audiences tried to walk out on Only You, a tepid, obvious romantic comedy in which she was overwhelmed by Robert Downey Jr.). Earlier this year, she appeared in The Watcher, a serial-killer movie so wretched that Keanu Reeves disowned it before its release.

"The problem is," she begins, "there always comes that moment on the set when you have to lie to make the other characters look better--so the leading guy doesn't look like an asshole. It was kind of heartbreaking when I started film acting, because I didn't realize that, and it's something I've come to accept--that it's not an actor's medium. It's the director's medium, and then after the director comes the editor, then the studio. It's about those things. But you accept it, because I still really love movies, and I still find it a challenge to try to keep getting that vision across. Because being a hired gun sucks. Being a hired gun, you're just always...selling, because you're looking to get hired." She laughs, but not because she finds what she's said particularly funny. "I don't like that part of it.

"But, I mean, how can I get my vision across? I'm not in charge of the camera. I'm not in charge of the overall thing, and that's fine. It's not that I want to be in charge of the movie. I don't ever want to be. I don't have that desire. But I would just like to understand where I fit in and what I'm part of. I don't think I picked well, but I didn't know how to pick. Then I just go back full circle to: I was young; I was a kid; I didn't know. How could I know? What I've learned is, if the script is still sitting there and I can't decide, I am trying to convince myself and force myself, or someone else is telling me it's good for me, and it turns out to be a disaster for me spiritually. What we're really talking about is spiritual. It's hard to talk about, because it sounds so silly."

When she does turn up in major films, when she does get the chance to communicate her "vision," she is buried so deep in the credits, archeologists are called in to retrieve her. Hers is the best performance in the sitcom-smarmy What Women Want, in which she plays a manic, skittish coffee-shop girl in lust with Mel Gibson's rat-pack ad exec, but she's relegated to the margins--the afterthought who steals the show. Little wonder she has come to refer to herself as a "character actor" and a "hired gun"; that is what happens when those who have been told they're special wake up one morning and realize they're now thought of as ordinary.

Tomei got into show business almost 17 years ago, when she was a 19-year-old regular on As the World Turns; a decade later, in March 1993, she was an Oscar-winner. But she soon enough found out that the statue makes a nifty doorstop. It meant absolutely nothing. Indeed, there are still those who think Jack Palance read the wrong name. Maybe he did it on purpose. Maybe he was drunk. Maybe he just didn't like Vanessa Redgrave, Judy Davis, Joan Plowright, or Miranda Richardson--the other nominees in the supporting actress category. Then again, maybe he was drunk. Tomei now refers to her Oscar as "beginner's luck."

In some ways, hers is a fate no different from that of other women awarded the same honor. Geena Davis, recipient for her work in The Accidental Tourist, is now slumming it in a sitcom so lowbrow, it needs subtitles for the literate. Gwyneth Paltrow, Miramax's golden girl after Shakespeare in Love, was seen not long ago sharing a karaoke machine with Huey Lewis. Brenda Fricker, winner for My Left Foot, has all but disappeared, and perhaps none has fallen lower than Ghost co-star Whoopi Goldberg, now the permanent center square in a game-show wasteland. Historically, the Oscar has not been kind to its supporting actresses, but only because there remain so few good roles for women not named Helen Hunt. What Kevin Spacey and Michael Caine and Denzel Washington see as a crossroads, most women accorded such acclaim find to be nothing but a dead end.

Worse, stories circulated throughout Hollywood that Tomei began acting like an Oscar-winner before she proved worthy of the accolades, that she preened like a diva who had yet to record a note, alienating studio bosses who wanted little to do with a fresh-faced prima donna. Whether such tales are true or merely the stuff of sexist rumor--what's deemed confidence in a man is considered bitchiness in a woman, and so forth--is hardly the point. Tomei will say only that she felt "burned"--by whom, she won't say--and that she made wrong choices, but only because they were all she was offered.

After she won the Oscar, she says, "I didn't feel supported, let's put it that way. I don't know what the hell I was thinking, but it's not a community of artists. There's no mentorship happening. It's kind of like, 'Let's eat our young,' and I didn't really know that. You grapple with, 'What the hell is going on? Why is this so painful?' You have to just go through it, like everything else in life.

"I have been poorly advised," she says, and her voice again becomes soft. "I have had bad representation, the wrong agent or whatever. Or there's nothing to pick from, so I pick from the best of the worst, and that's not good either."

Her voice rises again, and she sits up in her soft, white chair. Hers is the tone of voice of someone sick of feeling sorry for herself, at least for the moment.

She says the last thing as though it just struck her as an epiphany.