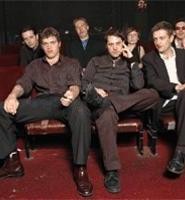 As a rising Irish trad-rock band on Chicago's South Side, the Tossers landed an opening slot for Shane MacGowan, the infamous once-and-again frontman for the Pogues. The septet soon discovered that the rabid audience for such a Celtic-rock icon is usually six sheets to the wind, with little patience for anything but the headliner. But all's well that ends well: Improbably, the band won over the hard-to-impress crowd and has since gone on to headline its own shows from coast to coast, playing rowdy sets, jigging its way from traditional marches like "Crock of Gold" to reels like "Out on the Road."