The Truth About Liars

Why intellectual talk about songwriting isn't always for the best. 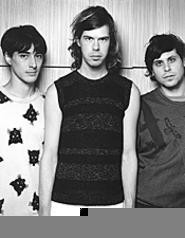 Liars guitarist Aaron Hemphill has a bone to pick. No, not with Spin, which called the band's second record, They Were Wrong, So We Drowned, "unlistenable." And not with the folks who have walked out of the band's recent shows -- them he's got no problem with. It's just that people have been getting the wrong idea about the Liars, based on the pitch-black ambiance of They Were Wrong, an LP about witch trials that sounds as if it was recorded in a forest enchanted by doom.

"Look, if you paint a picture of a squirrel, does that mean you're a squirrel?" Hemphill argues. "We are not dark, angry people -- and it does get tiresome when people assume that we must be dark and angry in order to have made this record. The literalism is astounding; it's like, did they ever think maybe we just wanted to try something new?"

The Liars have indeed tried something new with They Were Wrong: The last time a band made so emphatic a break with its prior sound was Radiohead circa Kid A, though the experimentation on They Were Wrong makes Radiohead's efforts seem tame by comparison. The sound is all but indescribable, because there's nothing else that sounds quite like this record -- including the Liars' 2001 debut, They Threw Us All in a Trench and Stuck a Monument on Top.

That record anticipated all the jittery dance-punk that followed and still follows; They Were Wrong, in contrast, mines a shaft of art-noise bleakness at once visceral, weirdly elegant, and all-consuming. The chasm between the two -- in tone, in song structure, in style -- is so vast, you can't help but sympathize with people who seek to explain it by proposing that the Liars experienced an apocalyptic, collective nervous breakdown. The fact that two original band members left after the release of the EP Fins to Make Us More Fish-Like in 2002, and that Liars frontman Angus Andrew has decamped from hipster Williamsburg to the woodlands of New Jersey, has only fueled rumors that the band is in padded-room mode.

But no, Hemphill insists. No nervous breakdown, and for that matter, no aesthetic breakthrough either.

"Maybe if you go from LP to LP, then you might hear an aesthetic break," he acknowledges politely, "but I think people forget that the first one was made three years ago, and in the meantime we were changing within the band. The lineup, for one thing, and more generally, Angus and I were just playing with some new sounds, new ideas. To us, the change seems very gradual.

"After Trench," he continues, "we kind of felt that we had exhausted that sound creatively. We had toured so much, for so long, on Trench, it had clearly become stifling. But it's not like we ever sat down and had a conversation, like, okay, now we're going to make our 'experimental' record. This record simply grew out of us experimenting, and we were experimenting because we could."

Hemphill goes on to explain that, from his perspective, one of the biggest differences between the making of Trench and the making of They Were Wrong was that because he, Andrew, and drummer Julian Gross were recording in their own studio, they were able to be more spontaneous.

"There's an incredible freedom in not having the pressure of paying a studio day rate," he says. "Instead, Julian and I would go out to Angus's house, and some days we would work very intensively, and other days we would maybe fool around with a sound, and other days we would just sit around, hang out, let things percolate. And the atmosphere where Angus lives really encouraged a kind of feeling," he continues. "I can't explain that, except that there's more open space than in the city, there's nature . . . I don't know, it's mysterious."

"Mysterious," in fact, is a good word to describe the overall feeling of They Were Wrong. The unhappy dissonance, the controlled cacophony, and songs like storm boots may be what hit hardest at first, but it's the mystery that remains long after you've shut off the stereo. Hemphill declines to parse the source of the record's enigmatic quality, but even when he attempts to break down the band's process, enigma rears its shadowy head.

"I think some of that feeling, it comes out of us being a three-piece now," he notes. "As opposed to having this pressure of filling in a certain number of instrument parts, we were stretching -- making fewer instruments sound like more, you know?"

"Okay, well, the way we worked on all the songs, we'd do one take that sounded good, and that would set the standard for the structure. The first song we recorded, that was how we did it, using the first take and building the structure around that. Like, if you were going to make a song out of this interview, you'd pick one paragraph that you thought was good, and remove everything else, and base a new interview, or write-up, or something, on what you had written in that one paragraph. Does that make sense?

Sort of. Maybe. Not really.

"Okay," Hemphill tries again. "One thing I can definitely say is that this record absolutely continues on from Trench, in that it's all based on rhythms, the rhythms are the core of each song, and then . . ."

"You know what? I think, maybe, it's better just to not try to explain it," he concludes at last. "I think this is a record you don't need to intellectualize in order to fully experience -- everyone keeps trying, but it doesn't really get you anywhere. My feeling is, just respond. I don't care if you don't like it. I don't mind if you hate it. At least that's honest. Like, the people who have walked out on our gigs -- good for them, they're not trying to commit to something that doesn't mean anything to them. But the people who stick around, they are responsive in a way that feels new to me, because frankly it's not just about the music being catchy or the latest thing. And to make people feel that strongly, that's what makes it exciting for us."