If Schnitzel is your dish, warm and welcoming Sutter's is the place for you. 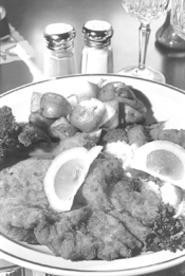 John and Stephanie Sutter's homey little Geauga County restaurant is set back mere feet from the road and dwells in the shadows of a tire store and an excavating contractor's facility. Here, the farmland is giving way to scarcely regulated industrial sprawl, and 18-wheelers roar by at semisonic speeds. In a word, it seems an unlikely destination for crowds of sophisticated East Side diners. But there they are, in their Land's End weekend wear, driving their Mercedeses and Expeditions in from all over the surrounding countryside. They appear bothered not a whit to find themselves out in the sticks, listening to the oldies station on the restaurant's radio, seated cheek-to-jowl with rawboned farmers in bib overalls, straw hats, and barn jackets. Then again, who's to say this sheer lack of pretense isn't one of the draws?

That, of course, and the veal. If you thought you would never live long enough to see "schnitzel" and "Français" appear in the same phrase, I've got news for you: Schnitzel Français -- breaded veal topped with mushrooms, a blend of crumbs and crab, and a creamy white sauce -- is a featured special at Sutter's, along with the equally worldly Schnitzel Oscar (with crabmeat and béarnaise), Schnitzel Genovese (with mushrooms and wine sauce), and Schnitzel Cordon Bleu (with Bavarian ham and Swiss).

In fact, out of a total of 20 entrées available on a recent Saturday night, fully three-quarters of them featured veal. Once it's been established that veal, then, is what you shall eat, you must next determine if it will be the crunchy-crusted "schnitzel"-style meat or its naked, sautéed cousin that you consume. Among down-to-earth fundamentalists, anything more la-di-da than a huge portion of good old-fashioned breaded schnitzel, accompanied by wedges of juicy lemon, is sacrilege. But freethinkers in topsiders and cashmere cardigans can opt to top the meat -- breaded or otherwise -- with all sorts of go-withs (garlic, mushrooms, capers, onions, green peppers, and artichoke hearts are prominent) in every possible combination. Some preparations additionally call for cheese and marinara; others demand a choice between "creamy sherry wine sauce," "Marsala wine sauce," and "light wine sauce." For those who insist on passing beyond the veal, there is the combination plate -- where the schnitzel shares space with two gigantic but delicate homemade stuffed cabbage rolls -- a New York strip steak, breaded pike, linguine, linguine with clam sauce, linguine with chicken, and an impressive black mountain of decent mussels provençale.

So, if variety is not the spice of dinners here, what is? The massive portions undoubtedly help bring in the crowds. No one, it seems, leaves without the makings of tomorrow's dinner in hand. On a weeknight, for instance, boxes for our leftovers materialized the moment our observant server noticed our appetites starting to flag. And on a weekend, a different but equally maternal server even gave us a good-natured scolding while packing up our leftover dinners. "My goodness!" she fussed in mock dismay. "You two hardly ate a thing!"

The truth was, our tummies were stuffed before we even made a stab at our enormous entrées, probably because we had been foolish enough to order appetizers. Listen up: Starters are entirely unnecessary at Sutter's, where the inexpensive meals (nothing more than $15.50) include baskets of sliced white bread and butter, salads of mixed romaine and iceberg lettuces topped with shredded red cabbage and broad ribbons of carrot, and a choice of wickedly greasy potato pancakes, fried to order in John Sutter's favorite black iron skillet, or the even greasier -- and equally delicious -- home fries, slowly sautéed with onion and generously dusted with paprika.

In fact, appetizers aren't even listed on the regular menu. You have to search the daily specials (generally handwritten on an index card during the week, but typed and photocopied for the weekend crowds) to find the likes of Hungarian Goulash Soup, full of carrot, onion, celery, dainty dumplings, and (of course) veal, in a vaguely sweet, smooth broth; or Sauerkraut Meatballs: five crisp-crusted tennis-ball-sized orbs, finished with a spoonful of white sauce. Five giant breaded and fried mushroom caps had a nice flavor, although they came to the table not completely heated through, and their moist crumb-and-crabmeat stuffing was far more crumb than crab. And an "appetizer-sized" order of mussels -- with more than two dozen meaty, well-cleaned critters in a rich, decidedly garlicky tomato broth -- was good, if overwhelming in its sheer portion size.

But fortunately, Sutter's isn't just about bigness. Good quality factors into the equation, too. Ingredients are fresh, and homemade sauces are, for the most part, well-crafted. While we were hard-pressed to detect essence of sherry in that ubiquitous "creamy sherry wine sauce," for instance, the fact remains that it was a perfectly made white sauce -- rich but light-textured, with a delicacy and refinement that enhanced whatever it settled upon. Likewise, the savory tomato sauce that underpinned our plate of excellent cabbage rolls and schnitzel tasted fresh and bright, and was just the ticket for melding the solid Eastern European flavors. Breadings on the wiener schnitzel, mushroom caps, and sauerkraut balls were wonderfully crunchy and light; the veal was consistently tender; and although the sponge-like potato pancakes had soaked up what was probably an entire day's allotment of oil, they were the last things we thought about, longingly, before falling asleep on Saturday night. If the Scaloppini Sutter Style (sautéed veal with garlic, shallots, fresh tomato, and mushrooms in the sherry cream sauce) could have profited from a bit less sauce and a lighter touch with the garlic, well, we were entirely won over by the lushness of the Schnitzel Swiss Style, topped with thin sheets of Black Forest ham, sautéed mushrooms, and baby Swiss cheese. However, on future trips, we will steer clear of the linguine with chicken breast: With its lackluster marinara and overcooked pasta, it was heavy and forgettable.

As for its appearance, the restaurant is a clean and tidy space, with only 14 tables crammed into the tiny barroom, a slightly larger main dining room, and a little "overflow" dining area tucked in beside the kitchen. The down-to-earth decor is a hodgepodge of elements, ranging from elegant gilt-framed mirrors to a red-chile-pepper wreath on the mantel of the picayune fireplace. Tables are topped with retro-style orange-and-black paper placemats, providing descriptions of assorted mixed drinks, including long-forgotten recipes for passé little numbers like the Gin Ricky and the Dubonnet Cocktail. Cloth napkins hold bundles of mismatched flatware, and flowers and candlelight are notable only in their absence.

Still, Sutter's simple decor, along with its nomadic history -- which has forced its fans to chase it across the countryside -- has apparently only heightened its allure. John Sutter, a Romanian-trained professional chef with plenty of local cooking experience, opened his first restaurant in 1980 on East 140th Street in Cleveland. After nine years, the popular dining room outgrew its space, and it moved to a larger nearby facility, where it remained until 1996. By then, the mister and missus found themselves in need of a break from the rigors of restaurant operation; when they reopened in Geauga County in 1998, the old regulars seemed to take it as a personal challenge to find their way to the new location, often bringing children and grandchildren along for the ride.

This type of familial loyalty finds its reflection in the restaurant's staff. Most evenings, John is hard at work over a hot stove in the kitchen, while Stephanie either waits tables or tends bar. John's sister, Lisa Ghiurcan, makes the daily desserts: items like a prodigious lemon pie, topped with a towering cap of Martha Stewart-perfect meringue, or dense chocolate cake, ribboned with creamy chocolate frosting. John's brother Joe is his kitchen sidekick. And the couple's children help out -- bussing tables, washing dishes -- as necessary.

It all makes for a hospitable little portrait of hearth and home, a snapshot where you can visualize yourself sipping white zinfandel with impunity, and where no one needs a dictionary to comprehend the menu. And that, in a nutshell, is this restaurant's charm. The world can be a rough-and-tumble place, for sure. But as long as your bruised and quivering lips can form the words, "Veal, please," you know you'll never go hungry at Sutter's.