With the Music. Wednesday, November 27, at the Agora Theatre. 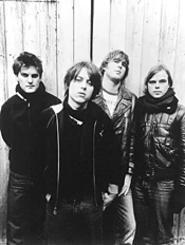 Cynics have cast a wary eye on the media hype around the Vines. It just seems a little too perfect, no? A band from nowhere (or, as they refer to it, "Australia") that no one's ever heard of records its first album with mega-producer Rob Schnapf. Within minutes, the group, with a high-cheekboned, reliably off-his-nut frontman, lands on the cover of Rolling Stone. But, says the cynic, what about the songs?

Competent but not genius is the answer, which is why -- British press reports to the contrary -- the Vines are more the second coming of Stone Temple Pilots than Nirvana, whose Bleach-era scrawl they lace with Beatlesque psychedelics. Highly Evolved is Gen-X sonics served up for all the Gen-Yers getting their first taste of RAWK on the heels of the Strokes/Stripes/Hives "revolution." When all's said and done, it's not half bad, and live the Vines blow out their amps and smash their gear with admirable conviction. Bush in the White House, Iraq on the brain, Cobain the rock deity du jour: You're gonna party like it's 1991.