Saturday, January 25, at the Beachland Ballroom.

January 22, 2003
comment
The Waco Brothers, with the Sadies and Jon Langford 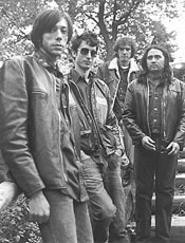 Not only will the Waco Brothers' gig with the Sadies feature an opening set from Wales's answer to Ryan Adams (read: Waco frontman Jon Langford, the patriarch of the world's finest faux-family alt-country punk band since Uncle Tupelo), but no doubt he'll also be joining his friends in the Sadies for a few tunes off their forthcoming joint effort, Mayor of the Moon.

To set the stage a bit: Langford plus the Sadies is a bit like what might have happened if Billy Bragg and Wilco had thought better of hating each other after those Woody Guthrie sessions and instead opted to splice their genes. Moon's more contemplative tracks boast a spare and eerie beauty that takes the edge off Langford's aggro-liberal rockabilly swagger. "Looking Good for Radio" and "Strange Birds" tap into the high-lonesome longing that probably drew most folks to the Americana sound in the first place, and remind even the most aggro-liberal among us why we all still dream about the West.