The Wall of Greed

A contractor ripped up a bathroom and found a fortune. Now everyone wants a piece. 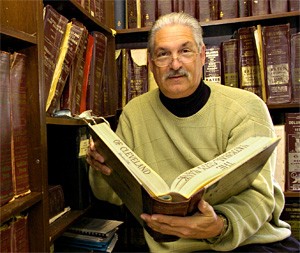 Late into the night, in an office crammed with leather-bound phone books and stacks of yellowed microfilm, Ray Whitaker works. He's a professional genealogist, so work means combing forgotten files and police records, searching for people both dead and alive. It's not glamorous; his office is tucked in a dusty VFW building in Euclid. But it's decent work. If a person needs to find a long-lost ex-lover, Whitaker's the man. And he can earn several thousand dollars from his gratifying deed.

Whitaker's leads often come from obits in the newspaper. But last December, he got a call from his boss, the owner of Worldwide Finders. Whitaker had been hard at work on a complicated unclaimed funds case. But his boss had a new, more lucrative case for Whitaker to dive into, and the lead wasn't in some obscure death notice. It was on the front page.

The story, which ran in The Plain Dealer and was picked up in papers nationwide, was about a contractor named Robert Kitts. While renovating the bathroom of an acquaintance's Lakewood home in 2006, Kitts had ripped out a wall and stumbled across a metal box. Inside, he found a wad of old money. It was accompanied by no note, no explanation for its existence — just the words "P. Dunne" printed on the paper that held it together.

Soon Kitts and the home's owner, Amanda Reece, were pulling three more metal boxes from the walls, each stuffed with money — $182,000 in antique bills from the late 1920s. A trip to an appraiser only bolstered their windfall: Some of the bills were rare Cleveland Federal Reserve banknotes. Their treasure was worth nearly $500,000.

Had they agreed to divide the money — had they realized that without each other, neither would be a penny richer — they never would have made the front page. Whitaker's boss wouldn't have sent him chasing after their fortune.

But while Reece promised the contractor 10 percent of the find, Kitts claims, she soon stopped answering his calls. So Kitts hired a lawyer, who told him that not only did he deserve 10 percent, he deserved the whole stash. According to a little-known "finders-keepers" law, the money was all his — as long as no heirs could rightfully claim it.

The PD story in hand, Whitaker started poring through court records in search of the mysterious P. Dunne. And he quickly learned that Dunne wasn't that mysterious a man at all. Rather, he was a high-powered broker in 1940s Cleveland, a guy whose friends included Arthur B. McBride, the first owner of the Cleveland Browns. When he died in his home in 1968, Whitaker learned, Dunne left the majority of his assets — $636,000 worth — to his sister-in-law, Agatha Gannon.

But that didn't include the money he had stashed in the walls, a typical savings device for a man who lived through the Depression. So while Gannon owned the home — a large brick and wood Tudor on Edgewater Drive — she had no clue there was a separate fortune stuffed in her walls. It took Reece's decision to remodel a bathroom, 40 years and six or seven owners later, to uncover it.

Armed with reams of records, Whitaker followed the Gannon family tree across several levels of branches. He discovered that she'd died in 1974, alone and unmarried. So she left her estate to 21 nieces and nephews — the rightful heirs, Whitaker believed, to the stack of bills in the wall.

By late December, he had tracked down seven living nieces and nephews, and the families of several deceased heirs — more than 50 potential clients in all. And he made each of them an offer: If a lawyer could wrestle the fortune from Kitts and Reece — whose lawyers were wrestling over it themselves — the descendants could split the dough, with the lawyers and Worldwide each getting a cut.

Six people signed on, so Whitaker called Euclid attorney Egidijus "Gid" Marcinkevicius. And with that, the two-person cage match over control of the treasure in the wall — money that had gone untouched for at least 38 years — had morphed into a 20-person battle royal, with lawyers and a genealogist all in line for a paycheck. "Whenever I ask my assistant for the case," says Marcinkevicius, "I ask her to grab 'The Greed File.'"

Finally, last week — a year and a half after Kitts tore up Reece's bathroom — the Greed File was opened in court, at a hearing to determine the money's rightful owner. As they waited for it to start, Reece and Kitts sat silently on the benches outside the courtroom. Both stared blankly out the windows at the dense fog that had engulfed the city, doing everything to avoid eye contact.

Once inside, Magistrate Charles Brown attempted to get a handle on the case, seeming puzzled. "Essentially," Marcinkevicius said finally, "we're all here to see who gets the money."

But first there was the question of how much money was left to get. Reece's lawyer, Skip Lazzaro, told the court that most of the money was gone.

Brown turned to Reece. "How much is left?"

"About $18,000," Reece said sheepishly. It was stashed in her 71-year-old mother's safety deposit box in South Carolina. She refused to say how she spent it.

Kitts, sitting in the courtroom gallery, seemed bemused by the process. "When the day is over, I just want to know I did the right thing," he said later. But his lawyer, Pat Farrell, argued that the money is Kitts', citing those finders-keepers laws. Reece's lawyer, of course, says it all belongs to her; she owned the house, after all. And Marcinkevicius, just as Whitaker promised he would, argued that Dunne's cash belonged to Dunne's descendants.

In the end, nothing was settled. Marcinkevicius asked for the rest of the money to be transferred from Reece to a joint safety deposit box, held in the lawyers' names. "No. No. I won't do that," Reece hissed from her front-row seat. "You can't do that." But Lazzaro shushed her, holding up his hand to motion for her silence. Eventually the three lawyers agreed to have the money rest in a safety deposit box until the story was sorted out. Only they'll have access to the cash.

Reece left the courtroom, stoic and silent, and soon Kitts left quietly too. The lawyers stayed behind for a bit, to hammer out a date to come back to court. They seemed chummy as they talked, and when they left, they were all smiling.