The Way He Likes It

When he's not teaching at the Oberlin Conservatory of Music, local jazz guitarist Bob Ferrazza lays down the heavy swing. 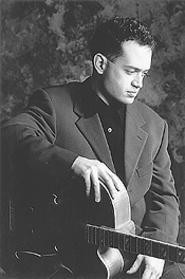 It's a slow but not particularly quiet Thursday night at the Boarding House. At the front of the University Circle joint, five or six patrons line the bar, laughing and shouting over each other. Up the stairs and just around the corner, guitarist Bob Ferrazza and bassist Peter Dominguez have set up for their weekly duo gig. The local weather reports predict a wind-chill of negative 15 degrees. That may be why tonight they're playing to a crowd of two.

One man, a friend of the bassist, sits front and center -- his fingers sunk in a plate of barbecued ribs. Another sits directly behind Ferrazza. The old guy leans back in his chair, a pack of cigarettes in one hand and a cup of coffee in the other. "Lay it down, man. Lay it down," he yells, right into the back of the guitarist's head. But it doesn't seem to faze Ferrazza one bit. He's crouched over his golden, 30-year-old Gibson, and piles of manuscript paper surround his feet. His eyes are slits, and he's snapping through melodic lines with the pop of a rim-shot. First, it's a single-note run, horn-style. Pause. Then a burst of double-time. A few double-stops slip in.

Dominguez's solo spot arrives, and Ferrazza's now comping like mad -- dropping chords right on the heels of the last ones. This isn't a lazy, coffeehouse comp or a wild thrash. What it is is completely in tune with what Ferrazza's been up to all night -- the heavy swing. It's a classic feel that places Ferrazza firmly at the end of a noble lineage, starting with Wes Montgomery (a model) and running through Pat Martino and Cleveland's elder statesman of guitar, Bill deArango (both teachers and mentors).

"I picked up the guitar playing rock, blues, and classical," Ferrazza says. "Within a year, I heard jazz and got interested in it. Slowly but surely, I started playing jazz exclusively. But when I heard jazz, the jazz I was listening to didn't even have guitar. So I tried to phrase like a horn player. I had an idea that it was hip to do that, and I was just a kid. That led me to a point when I was kind of frustrated. [I thought,] if I had started playing again, would I have picked up a tenor? I went through that for a while, and I thought, "Well, I'm going to be the first guitar player to sound like Charlie Parker.' Then I realized that that's impossible. Slowly I came around to the fact that you have to manifest your sound through the instrument. Sooner or later you have to deal with the instrument."

Oddly enough, Ferrazza shows none of the signs that he came to jazz -- as most post-'60s jazz guitarists have -- through blues and rock. His sound is pure jazz and very pre-fusion.

"When I played rock, I played rock," he says. "I was always kind of neurotic about the differences between the music. When I played jazz, it was strictly from the jazz vocabulary I was learning. To be honest, I still feel the same way. When I hear electronic jazz, it just doesn't touch me. I can be impressed with the lines, but the sound is missing something."

Ferrazza's clear tone and classic technique have won him sideman duties with some of the great jazzmen to have come out of the '50s and '60s: musicians such as trumpeters Art Farmer and Donald Byrd and B-3 legend Jack McDuff. He has also branched out on his own, recording two CDs, Personal, and The Way I Like It, and plans to contribute a few tracks to an upcoming rare Ellington ballads compilation for Koch. But fortunately for Cleveland, the local kid (Cleveland born and bred, a student at CSU), Ferrazza has opted to stay in town and lug his guitar up and down familiar city streets. He also spends a few days a week as professor of jazz guitar at the Oberlin Conservatory of Music. He's now solidly rooted in the improvisational music and not at all interested in his rock roots.

"That's what I love about jazz," he says. "With it, you can express any emotion."

This week at Nighttown, Ferrazza gets to stretch out with an unusually strong band. A full three-fourths of the group will consist of Cleveland's most accomplished jazz musicians: Frequent Ferrazza sidekick and Oberlin colleague Pete Dominguez will man the bass, and Dan Wall will play piano. The one out-of-towner will be special guest drummer Billy Hart. As far as Ferrazza's concerned, with a band like this, the possibilities are wide open.

"I'm trying to present music that I feel strongly about," he says. "And when I do that, I don't need to think about the band and what they do well, because they all do everything well. They're all incredibly versatile. Peter plays a lot of classical music. I don't know about classical with the other guys, but Dan can play anything jazz. He can play straight-ahead, be-bop, the "out' thing. And Billy, he's so many people's first call. I remember, I played a samba one time -- I'm a fan of a Brazilian guitar player/singer, Joao Bosco. So we played a samba with Billy, and he yelled out at me from behind the drums something about Joao Bosco. He knew exactly where I was getting it. He's also studied on the drums. I can't remember where I saw Billy do this, but he was giving some guys lessons on the drums -- saying this is how Philly Jo Jones would do it, this is how Art Blakey would do it. He's such a studied drummer, it's incredible."

Back at the Boarding House, the guy with the cigarettes and coffee is still smiling, and the bassist's friend is still eating. Ferrazza's pick slips up his sleeve, and he's indulging his Latin inclinations -- finger-picked chords, mellow mid-register lines over a roving bass, bossa nova beat. Down at the bar, people are still laughing and yelling, and only a few of them notice as Ferrazza takes the lead, soloing with his thumb, Wes Montgomery-style. "Lay it down," yells Cigarettes and Coffee. "Lay it down."