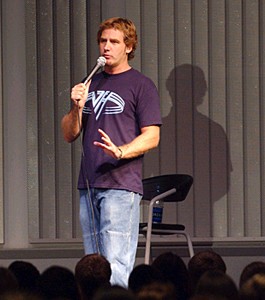 Comedian Jim Florentine likes to piss people off. He's a regular on Comedy Central's prank-phone-call show Crank Yankers. He released a DVD of hidden-camera stunts, Meet the Creeps. And he appeared on Jimmy Kimmel Live tanked, after loading up on the green room's open bar. And while employed as a DJ, he'd "ruin weddings on purpose, because people were all uptight," he says. "I would play Metallica while they were eating."

Florentine made his bones on the New York City comedy-club circuit by being confrontational. But he didn't become a jackass merely to create an onstage persona. He says he's pretty much always been like that. (Although he admits he got into stand-up so he could say whatever he wanted without worrying about consequences.) He proves it with another wedding story: "This one bride came up to me, she was like 300 pounds, and I was messing with the lights, turning them on and off," he recalls. "She was like, ‘I don't like the lights on and off.' I said, I figured you were used to it, opening and closing the refrigerator all the time."
Thu., Feb. 2, 8 p.m.; Feb. 3-4, 8 & 10:15 p.m.