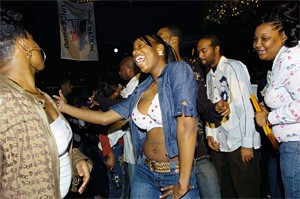 A sparkling Buick creeps down the gridlocked street. Its front doors are flung open, unleashing the heavy bass of Young Jeezy. Other cars cruise by in the same cocky manner — doors open, passengers hanging out, bass thumping — as four hip-hop chart-toppers clash in one ear-piercing symphony.

"This does not seem like normal behavior," says John DeLuca, who's watching the procession on his laptop. This is just one of several scenes DeLuca captured with his handheld video camera last summer. The others feature more chaos: a man hurling a brick through a car window; gunshots sending guys leaping into cars and speeding off; fleeing cars colliding, leaving a lonely cop, surrounded by rowdy, drunken bystanders, looking overwhelmed and panicky.

"I can't find 'The Belt Beater'; where is that?" DeLuca asks himself, searching for a video of a guy taking off his belt and beating the roof of a nearby car. "That was a classic."

DeLuca, a thin man with fingers gnarled by manual labor, owns a small Flats storage company. From the roof of his business, he made these films with the simple goal of Sasquatch photographers everywhere: to document unbelievable images. But DeLuca has become the Flats' very own Zapruder. The grainy videos are now central to the crusade of Cleveland Councilman Joe Cimperman, who, at the behest of Flats business owners, is trying to shut down Mirage on the Water, the hip-hop club he blames for the twice-weekly carnival of lawlessness.

Cimperman, the burly but baby-faced politician who represents the Flats, is convinced that the mayhem captured by DeLuca's lens is attracted, even encouraged, by Mirage's promotions. Mostly he points to "Jeans and Moet Night," where the dress code is abandoned and cheap champagne is peddled. The club's refusal to put security outside the club only makes things worse, Cimperman says.

"The way they perceive they're going to make money — teenager-like machismo — naturally breeds chaos," he says. "It's not the clientele that's to blame. It's the management."

The neighborhood's business owners, not saddled with political aspirations, put it less delicately.

"They have a clientele with a disregard for safety or human life," Cindy Kriz, a manager at the Flats' Stonebridge luxury condos, says of the Mirage. Young urbanites pay up to $1 million for the posh condos, but they're forced to flee the streets after 1 a.m., she says. "On the weekends, we have robberies, shooting, murders. It's a very scary environment."

Bar owners tell similarly grim tales. The gridlock from cruising cars gets so bad, they say, customers can't drive out and are too fearful to leave the bar. "I gotta get them out at 2:30," says Marc Garofoli, owner of McCarthy's Ale House. "Eventually, I just push them out, and they huddle near the door."

Garofoli keeps his employees inside until 4 a.m. or later, when the Mirage crowd dissipates. Jim Salopeck, who owns the nearby Metropolis, says he can't find enough employees willing to brave the streets after their shifts. "The people that come out of this club, they're not there to do good things," says Kriz. "They're all hip-hopped and excited."

The bedlam isn't limited to the streets either. Last month, a man pulled a pistol out of a Timberland boot and emptied it in the club. A woman, sitting idly on a couch inside, claimed to have been pierced in the leg by a stray bullet.

So when Cimperman finally went after the club's liquor license this fall, he became the yuppie messiah for Flats business owners. They've repaid him by collecting evidence and packing hearing rooms, ready to rail about their unwanted neighbor.

"When you have a rotting piece of fruit attracting flies," says one Flats landlord, "you get rid of the fruit."

The owner's office at Mirage is a spacious, tidy refuge above the vibrant dance floor. The walls — perpetually shaking with heavy bass — are decorated with yellowing newspaper stories that laud the club and its "color-blind" demographic. This is Dean Salivaris' war room. It's where the elderly Greek entrepreneur — who dresses like a yachtsman and smells of delicate cologne — meets with high-priced attorneys, nurses a wounded ego, and considers his enemies.

"It's jealousy," he says. "They've been after me for years."

Salivaris has many enemies to consider. A dues-paying member of the Flats OxBow Association, a business-and-resident alliance, he feels betrayed by his neighbors. But he reserves his greatest spite for Cimperman. Why, Salivaris wonders, is it his charge to keep the streets around his club free of crime? The Flats has never been a place for peaceful strolls. And like the rest of Cleveland, the district is underpoliced. In the neighborhood's heyday, there were 30 to 40 cops herding its rowdy crowds, according to police union chief Steve Loomis. "Now, when the Mirage is open, you'd be hard-pressed to find a police car," says Loomis, who never misses a chance to advocate for more police jobs.

"Every time something happens in the projects, they blame me," Salivaris says, referring to Lakeview Terrace, a public-housing development a few blocks west. "Don't my taxes pay for police?"

Cimperman scoffs at the idea that the city's to blame for violence outside the club. But it's Salivaris' other argument — the same one being levied by a troubled hip-hop club across the river — that's most dangerous for Cimperman and his ambitions.

Like Mirage, West Sixth's Spy Bar draws a mostly black crowd to a mostly white playground. After a July 4th shooting in a parking lot near Spy, the councilman launched a loud public campaign to close the club. Cries of racism rang out instantly.

"The fucker lies and harasses," says Raj Singh, who owns Spy. "I get blamed for every black crime in the Warehouse District."

Salivaris now lays the same claim. He calls the crusade against the Mirage "ethnic cleansing."

"Do they want me to throw these people in the river or send them back to East 55th Street?" he asks.

These are the accusations that Cimperman, who recently announced that he's running for congress, can hardly afford. So they're the ones he most vehemently denies. "They always cling to the argument that this is about racial disparity," he seethes. "The only color that matters is green, and that's the color of Salivaris' greed."

The debate will continue to rage in hearings before the state liquor board, which should decide in about a month whether Mirage can keep its liquor license. Actually shutting the club down could take years.

Flats stakeholders are already exhaling. When they heard about the Mirage shooting, they sent celebratory text messages to each other, and copies of the police report were faxed from business to business. Soon, they hope, DeLuca will be able to retire his video camera for good.

"My God," says Cimperman. "He has a shooting in his club at the same time we're having hearings to revoke his license. It doesn't look good."