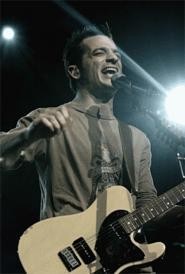 Cleveland record label Telarc International won a Grammy for best classical crossover album at the 48th annual awards ceremony on February 8. It took the honor for 4 + Four, a freewheeling collaboration between Turtle Island String Quartet and the Ying Quartet that dips briefly into bluegrass and ends with a Beatles cover. The Grammy is the label's 49th since 1980. Telarc received six nominations this year, including one for classical producer of the year, which went to 4 + Four producer Thomas C. Moore.

"I was thrilled," says Moore, Telarc's chief engineer. "I really fought to do this particular project. I put a lot of myself into this project, called in a lot of favors to get it done. I believed it would be good."

A Shaker Heights resident, Moore came to Cleveland in 1984 to attend the Cleveland Institute of Music. He is now an oboist with the Cleveland Opera Orchestra, Cleveland Pops, and Red {an Orchestra}.

Last year, Telarc's release of LAGQ's Guitar Heroes, by the Los Angeles Guitar Quartet, took the same honor. Founded in 1977 to produce classical records, Telarc now has a catalog of more than 1,000 discs that includes crossover and jazz. Moore says the company's unusual location has helped it become an eclectic enterprise that releases more than 50 albums a year.

"[Telarc] is an anomaly, because most labels are headquartered in L.A., Nashville, or New York," says Moore. "When I tell people I'm from Cleveland, even people from Cleveland are surprised. But I think it's one of the things that has made us successful."

· Following the January 29 shooting death in the Flats, the club formerly known as Kaos has a new owner and format. Lucic's (1204 Old River Road, East Bank of the Flats) will have a grand opening Friday, February 17. The shooting took place outside a teen hip-hop night; the new club is 21 and over, and will have a more upscale dress code. New owner Velimir Lucic says, "We'll try to attract mixed people. We play top 40, '80s, whatever they play on KISS-FM and 92.3 -- no hip-hop, nothing like that. We have new lights, new sound system, new carpets, and more security. I'm working with the police to make the Flats a nice safe place."

· Cleveland AC/DC tribute band Bonfire has been invited to play the Big Ball 3, the world's largest AC/DC convention, to be held in Wales in August. On Saturday, February 18, at the Jigsaw Saloon and Stage, the band will mark the 26th anniversary of the death of original singer Bon Scott (5324 State Road) with an all-Scott-era set, complete with bagpipes.

· Emo standout Between Home and Serenity has split with guitarist Adam Kraft and bassist Mike Mealey, replacing them with guitarist Seth Steiner and bassist Matt Molnar. Now on the road in southern states, the Cleveland quintet is getting ready to record its second LP, which it hopes to release by fall.

· The CD-release party at House of Blues on Friday, February 3, for pop-punk trio Trendy drew more than 700 fans -- the largest turnout in recent memory for an unsigned local band not playing Pink Floyd covers or supported by 5 to 12 other groups.