The Wizardry of OZ 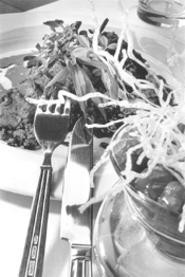 As crisp as Dorothy's pinafore. As irresistible as a field of poppies. And as bewitching as the lovely Glinda. This is OZ, Chef Donna Chriszt's newest culinary landscape in the heart of old Tremont.

Chriszt, she of the firm handshake and dazzling smile, opened OZ in October, following attention-getting runs at the now-defunct Jeso and J Café. The newly renovated space, directly across from Lincoln Park, stretches across the ground floors of two stately, connected Victorian buildings and is the self-taught chef's best endeavor to date. Here, Chriszt seems relaxed and confident as she goes about exploring and refining the global flavors that have become her hallmark.

Like most successful chef-owners, Chriszt displays a splendid obsession with detail, both with what goes on in the front of the house and in the back. It's no surprise, then, that the decor is strikingly precise and tasteful. Despite the restaurant's famous namesake, you'll look in vain for any reference to Toto, tornadoes, or the Tin Man. The Cowardly Lion, the Scarecrow, and Auntie Em are notable only in their absence. And the servers, a bustling cadre of friendly folks, have not been forced to dress like Munchkins. (Instead, they wear silky gray bowling shirts and blue jeans.) The only nod to what lies "over the rainbow" is found on the evening's dinner check -- where the bottom line advises guests to "Follow the yellow brick road" -- and in a single, suitably macabre carving of a flying monkey, tucked into a quiet corner, whose base contains a music box that tinkles, "Ding, Dong, the Witch Is Dead."

Rather, the unadorned walls of the front dining room/bar are painted a striking shade of umber, a savory color that also shows up on the modest little awning above the front door, the elegantly bound menu, and the restaurant's minimalist business cards. The main dining room, a tightly packed, nonsmoking space with about a dozen tables, is painted a particular shade of pale green that we have come to recognize from Chriszt's previous restaurants. ("Cela-donna" green, we're tempted to call it.) Here, the tender hue is set off against crisp white linens, squat glass votives, rotund crystal vases full of gracefully drooping yellow tulips, and comfortable, moderne-style molded plastic chairs. Curvaceous shapes -- snowball lights, hanging globes, and circular dishware designs, for instance -- abound and give the room a subtly but decidedly feminine feel. Big windows overlook the park, and a corner of the kitchen is visible from most tables.

While the restaurant's interior may be a lesson in understated beauty, it is here in the kitchen that Chriszt practices the real wizardry. Always one of the city's most visually attuned chefs, Chriszt still turns out handsome plates of neatly stacked foods. But now, her attention seems lavished on the tastes and textures of what's on those plates, rather than on the details of presentation. Her cooking seems bolder, her flavor vocabulary more developed, and her touch increasingly sophisticated. From an unforgettable morsel of Seared Foie Gras, which melted on our tongue like whipped butter, to a perfect beef tenderloin, stroked with a zesty kalamata-olive vinaigrette, most of her dishes are now as assertively flavored as they are creatively designed and lovely to behold.

Consider the roasted duck salad, for example, a light entrée whose name can't do it justice. No mundane pileup of greens, this. The heart of the dish was in the slices of warm, succulently smoky duck breast, fanned out beside two petite triangles of firm pumpkin-flavored polenta. But its soul was in the accompanying tangle of astringent frisée, whose coarse texture and incipient bitterness were tamed by just the right amount of creamy, honey-infused hazelnut vinaigrette. The resulting series of inflections in flavor, temperature, and mouth feel -- and the way those inflections fell into a pleasingly coherent whole -- was a delight.

Not that Chriszt can't do hearty fare as well. Even the most stalwart diner would be loath to complain about her take on roast pork, for instance: slices of pan-roasted tenderloin piled onto egg noodles, caramelized onion and cabbage, and rich pan juices. For flavor, aroma, and taste-appeal, the dish would be hard to beat. Similarly, the Beef Tenderloin stacked up with creamy risotto and braised broccoli rabe made for a suitably sturdy dish, and the addition of the kalamata-olive vinaigrette was a clever way to pique the meat's flavor without adding too much salt.

The menu's daily fish selection varies with what's good and available at market. One night's special, grilled mahi-mahi served with crab-tuna-noodle casserole, was another example of Chriszt's interest in contrasts. Here, the moist delicacy of the white fish -- barely opaque and still almost cool in the center -- was draped across the substantial casserole, a well-seasoned concoction that, in one of the kitchen's rare slips, was drier than it should have been.

Among the appetizers, even cautious diners are urged to give a try to the superlative Seared Foie Gras: a sinfully rich bite of duck liver accompanied by slivers of shiitake mushroom, quartered baby onion, and cubed Asian pear in a bit of thick balsamic reduction: The interplay of tastes and textures that the kitchen achieves here is nearly miraculous. (I'm usually beyond obsessing over wonderful things to eat, but in all truth, this is a dish worthy of obsession.) As an alternative, two thin, crusty corn-and-peekytoe-crab pancakes, with a touch of lemon aioli on a slaw of shredded carrot and radish, seasoned with salt, pepper, chives, and a touch of rice-wine vinegar, made a bright and savory starter. And Chriszt's signature Rare Tuna Martini -- cubes of velvety sashimi, with whole shiitake mushroom caps and a sweet soy vinaigrette -- was delicious. The tuna, along with Thai beef satay, fried pot-stickers, a pulled-chicken burrito, and two lemongrass-skewered grilled shrimp with a mellow papaya and mango "salsa," can also be had as part of the Silver Platter, a first-course tasting plate designed for sharing -- and a great way to sample the kitchen's flair for world cuisine.

OZ's wine list is one of the most intelligent and user-friendly ones around, with markups generally well below the usual 100 percent. For example, a bottle of Bonnie Doon Pacific Rim Riesling, retailing at around $10, is listed at a relatively modest $16. And a bottle of 1997 Far Niente Cabernet Sauvignon, retailing for around $100, is listed at $140. Just as remarkable, by-the-glass drinkers don't pay a premium here, with 1999 EXP Viognier, for example, selling for an equitable $6 per glass or $24 a bottle. And finally, the restaurant is one of only a handful of local dining rooms to offer a solid selection of "shorties" -- half-bottles that a couple can share without waste or worry. (It must be said, however, that mixed drinks come at a premium -- an average-sized Bombay Sapphire martini, with two cheese-stuffed olives, setting us back $9.)

Baker Nancy Haas's dessert selections are varied and interesting enough to keep pace with the rest of the menu. One night's Dried Cherry and Apple Tart, with a buttery crumb topping and a scoop of chunky pistachio ice cream, was mellow, sophisticated, and not too sweet. On another visit, a goblet of creamy rice pudding, flecked with chunks of ripe papaya and a scattering of sweet-tart pomegranate seeds, tasted tantalizingly rich, but was nevertheless relatively light-textured. And an individual pineapple upside-down cake, with plenty of caramelized pineapple and a crown of dense whipped cream, had an awesome flavor, although the cake itself was a bit too dry. But the most memorable surprise was the warm, crisp lavender-and-rosemary cookie that accompanied a cappuccino: A handful of these fragrant little beauties and a mug of hot latte would make a great permanent addition to the dessert menu, we imagine.

And here's something else that strikes us: If Oz had been like this when Dorothy paid her visit, the little farm girl would have been a lot less eager to hurry home to Kansas.