Theater by the Numbers

Lively acting (and prizes!) can't save We Gotta Bingo. 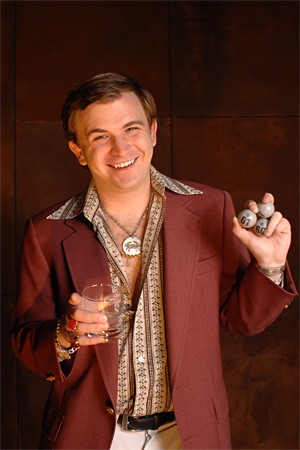 It's an interesting opportunity, to be able to buy a ticket and walk into a simulated world that accepts you at face value. Better still is realizing that while in that world, you can participate as you wish: quietly watch, laugh at the antics of others, or behave like a jackass — all without real-world repercussions.

This is the lure of participatory theater such as Tony and Tina's Wedding, a show that enjoyed a long run in Cleveland a few years back, in which each audience member became a wedding and reception guest. The idea of having an instant family or a gaggle of friends, all smiling and hugging you as you entered the "wedding hall," was a surefire winner.

The format is being trotted out again in We Gotta Bingo, under the auspices of Playhouse Square, and the results are decidedly mixed. While the dialogue and original songs range from mediocre to total crap, the relentlessly upbeat performers manage to elevate the material to sporadically amusing.

The premise is simple but thin: St. Patrick's church was demolished by mistake, so two Catholic churches have combined to throw a bingo fund-raiser. The Irish-based congregation has joined the Italian folks from St. Dominic's to throw a bingo bash at The Brew-Ha-Ha pub, with proceeds going to the rebuilding fund. And you're invited!

Right away there's a problem, since this kind of church affair has none of the emotional horsepower a wedding has. We all have colorful stories about weddings we've attended — the drunken uncles who passed out in the punch bowl, the bridesmaids who got knocked up in the cloakroom. But few of us have any similar connection to bingo, aside from those serious players who wear lucky turkey bones and carry custom-made daubers. Early on, the event hosts try to inject some camaraderie by splitting the audience into the two congregations, but that rivalry isn't sustained.

There's also a lack of focus, since the proceedings are led by various people, including Father Duncan (Patrick Carroll) from St. Patrick's, Rosa Dimini from St. Dominic's, and Bucky Fuller, the owner of a local scratch-and-dent furniture store who calls the bingo games. Helmut Voekel (Bob Keefe), the apparent patriarch of the polka combo The Voekel Chords, also takes charge from time to time.

Seated at long tables, the audience is provided with bingo cards, a dauber, a plastic eyeshade, and a lucky charm. But before any bingo is played (with prizes!), plenty of bad jokes must be endured ("Outside we have a bar and the bathrooms. Don't mix them up!") as other members of the cast roam the room, chatting up the audience.

At our table, the talented actress Liz Conway was Bucky's assistant Darla Blue, who shared her trepidations about pulling balls for the bingo game — rehashing her plaint repeatedly so that the slowest among us could fully appreciate the clever double entendre.

Even though the title song, written by Kevin Dutcher, is moronic ("If you know the lingo/You'll have a ball, by jingo"), the polka music in this production is loud and infectious. And let's face it: Even though "Roll out the Barrel" sounds strikingly similar to every polka tune ever written, this music is a blast for those who like to hoof it.

On stage, large Patrick Ciamacco is a force to be reckoned with as Bucky. He has the irresistible, bigger-than-life persona an emcee needs, and he displays some serious hops as he begins every round of bingo with his signature dance steps. And June Lang as Rosa adds some barbed commentary about the Irish interlopers.

The musical highlight occurs when Jeremy Dimini (Dan Marshall), Rosa's boy, competes against Moira O'Mahoney from St. Patrick's in a choir-off. But it's a boat race. Moira, played by Eileen Burns, tears it up in a hot rendition of "My Sweet Lord." The effect is enhanced by Burns looking so meek and demure — until she starts belting.

Director Ross Young keeps the energy at a fever pitch, and the room is decorated up the yazoo with kitschy wall hangings and a proscenium-mounted fräulein lugging a tray of frosty beer mugs. But this premise needs some witty writing, at least equal to the talent of the performers, before anyone can verifiably shout "Bingo!"