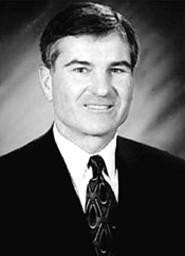 In his 21 years in the Lorain County prosecutor's office, Jonathan Rosenbaum always seemed to be fighting matters of life and death. The nemesis of murderers, thugs, and corrupt politicians, Rosenbaum called it as he saw it, even if he saw only black and white when everyone else saw shades of gray. Often righteously angry, always aggressive, he dominated the courtroom.

On the surface, Rosenbaum's last day in court had little of that drama. A defendant pleaded for a delay. Rosenbaum, the chief assistant prosecutor, argued against it.

But the tension that would destroy Rosenbaum's partnership with his boss, County Prosecutor Gregory White, was already at full boil, for Herman "Bucky" Kopf wasn't just any defendant. The developer built much of the county's toniest suburb, Avon Lake, and was a generous contributor to Republican White and his party.

Several weeks before the hearing, sources say, White asked Rosenbaum to consider withdrawing an obstruction of justice charge against Kopf -- to which the developer had already pleaded guilty -- and charge him under a statute more to Kopf's liking.

Rosenbaum resisted. Kopf's sentencing was set for January 18, and Rosenbaum felt his guilty plea should stand. "Regardless of how some people criticized the yardstick I used, it was always the same length for everyone," he says. Rosenbaum was so upset by what he believed was a double standard that he put in his 90-day notice.

Says Kreig Brusnahan, Kopf's attorney, White notified him that the deal was off on the day before the hearing. Brusnahan immediately requested a 90-day delay to get his client's affairs in order. He thought White supported the delay, so he was shocked when Rosenbaum showed up at the hearing the next day railing against the request for special treatment.

"I thought I was free to speak my mind," Rosenbaum says.

Common Pleas Judge Thomas Janas granted Kopf a 30-day reprieve. Four days later, Rosenbaum received a letter from White. "This letter is to give you notice that your authority to act on my behalf in court or otherwise is hereby revoked as of 4:30 p.m., this date," the letter read. White offered to let Rosenbaum stay on the payroll the full 90 days, but Rosenbaum replied with a letter resigning as soon as his vacation time expired.

It was a bitter end to the prosecutors' long and successful partnership. Rosenbaum had served under White since White was elected in 1980. Now he believes White is intentionally leaving the impression that he was fired, not that he quit.

White says he accepted Rosenbaum's 90-day resignation January 7, but he won't talk about the Kopf hearing. Yet he seems to be smarting under speculation that he dumped Rosenbaum to further his own career. (The Plain Dealer suggested in an early January editorial that White would do well to ditch his combative aide.) White denies it was a political move: "He's leaving because of issues in the office, period."

The two had been close for years. "It was a symbiotic relationship," says defense attorney Jim Burge. Handsome and eloquent, White was the front man and elected official. Decorated as a marine in Vietnam, he always seemed destined for bigger things. Despite an unsuccessful campaign for Congress in 1994, White was considered by the GOP for several higher offices, including the U.S. attorney post in Cleveland. Rosenbaum, typically described as a pit bull, was shorter, darker, and more contentious. The skeptical bad cop to White's good cop, he loved nothing more than to prosecute and seemed to relish the fear he inspired.

The prosecutors worked their disparate styles to great effect. Reluctant defendants would wince as Rosenbaum rudely berated them; White would step in to patiently prod them toward the truth. "You had one guy, two bodies," Burge says. The office was enormously successful, and both men saw their reputations soar.

Yet they weren't always on the same page. "It was a high-profile job, and they were dealing with high stress," says county GOP Chairman Robert Rousseau. "Who lasts 20 years in a partnership like that?" White, a Republican in a county filled with Democrats, had to calculate the risks. Rosenbaum loathed such considerations.

In 1999, the office drew national criticism when Oberlin mother Cynthia Stewart was indicted for snapping pictures of her eight-year-old daughter in the shower. A photo lab worker and the grand jury found the pictures pornographic; Stewart insisted they were not. Facing public outcry, White made a rare compromise, offering Stewart a diversion program instead of a trial. Later, he dropped the charges entirely. Rosenbaum hated the deal, Rousseau says. "That was one of the first big problems between Greg and Jon."

Rosenbaum alludes to tension, though he won't discuss specifics. "I was not happy with the direction the office was taking for a very long period of time." A few weeks before the Stewart deal became public, Rosenbaum announced his resignation. White later persuaded him to reconsider, and he returned to the office on a part-time basis. Brusnahan, who also represented Stewart, says he believes the two prosecutors never fully healed the rift.

It took another high-profile case to shatter the peace. Avon Lake Mayor Vince Urbin was convicted in January 2001 of four felony counts related to city money he'd spent at his brother's catering business. In March, just before his resignation, Urbin was indicted again, this time for accepting $2,000 in cash from developer Kopf. When Urbin discovered that Kopf received a grand jury subpoena, he returned the money and suggested the developer channel it back to him through his mother-in-law, according to Kopf's testimony. Urbin was charged on two counts of felony bribery.

But Kopf was not without sin, either. First, after being given immunity from bribery charges, he testified that he gave Urbin the money as a one-time compassionate act. He later admitted that he had lied to save the popular mayor. For years he had slipped Urbin undisclosed "contributions," he said, and the $2,000 was to ensure the mayor's continued favor. Kopf then admitted that his first testimony was intentionally misleading. He pleaded guilty to obstructing justice and agreed to testify against Urbin on the bribery charges.

With Kopf cooperating, a guilty verdict seemed certain. But in the December trial, Judge Mary Cacioppo threw out the charges against Urbin as soon as the prosecution rested. Rosenbaum had failed to prove his case, she said.

Prosecutors were shocked, and no one was sure what to do about Kopf. He had been scheduled for sentencing after Urbin's trial. But when Cacioppo threw out the case, the deal seemed to make little sense. "Really, you're talking about a guilty plea for bribing someone the court said had not been bribed," Burge says. Kopf and Brusnahan soon began lobbying for a reduced charge.

Kopf is a trustee of American National Bank in Parma, and the FDIC restricts anyone "convicted of a crime of dishonesty," such as obstructing justice, from serving on a bank board. Brusnahan asked White to withdraw the charge and replace it with "obstructing official business" -- a felony, but one that would not necessarily preclude Kopf from the board. Several other board members had serious health problems, Brusnahan says; at White's request, he gathered letters from the board pleading its case.

To some, the deal made political sense. White had been accused of pushing the Urbin case as a vendetta against the Democratic mayor. Giving Kopf a break might alleviate that impression without going too far. "As long as it's a felony, it's a felony," says Avon Lake Councilman Karl Zuber, an outspoken Kopf critic. "I don't think I'd have a problem with that."

Rosenbaum disagreed. A charge of obstructing official business must involve risk of physical harm to be classified as a felony. Kopf had never been accused of that. "We had a discussion over how the Kopf case should be handled," Rosenbaum says. "I knew I could no longer stay there after that."

White declined to discuss specifics about Rosenbaum's departure. "I've said it before and I'm saying it now: I hope Jonathan finds his peace." White says he won't replace his longtime chief assistant. He restructured the office after Rosenbaum went part-time, and he now runs the criminal division himself.

Rosenbaum, meanwhile, doubts he will ever prosecute again. "Quite frankly, from what I've learned about the system and the hardship it's caused, I really doubt I would want to practice in public life again." He plans to devote himself to a fledgling civil practice in Elyria.

Yet he may also switch sides for the first time and represent the defense. It's hard to imagine the consummate prosecutor fighting the system he supported for so long. "If the cause is right, I could defend them," Rosenbaum says with a short, humorless laugh. "Obviously, I've always been a sucker for causes."