They Called Him Crocus 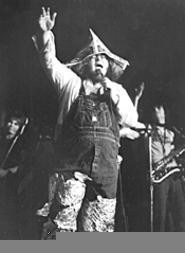 For sheer girth and ambition, Crocus Behemoth had no rivals. The son of an English teacher, the Tri-C dropout was a bushy-haired hulk with the physique of a refrigerator and an uncanny thirst for vodka.

Hired as the paper's art director, he was also its best wordsmith, and he bitched constantly about the typos he carved from the paper with his X-acto blade. Crocus, like most everyone associated with Scene in the early '70s, soon nudged his own byline into print -- first with record reviews and interviews, then with a weekly gossip column. Originally called "The Phlorescent Crocus and Rickie," it was later renamed "Croc O' Bush" -- the "Bush" a reference to frizzy-haired co-author Mark Kmetzko.

A bulletin board of local music events -- but primarily a sounding board for Crocus' warped intellect -- the column became a centerpiece of each issue and a precursor to the long-running feature Makin' the Scene. Skimpy on actual news, it read mostly like a collection of bizarre non sequiturs scrawled during an acid trip.

Never mind that it typically made no sense. In Crocus, Scene found its first true voice.

"The guy had a fixation on Sears-Roebuck catalogues, among many other strange fetishes," remembers John Gorman, then program director at WMMS. "I think he was an acquired taste."

Indeed he was: "Croc O' Bush" became a popular drink at the Viking Saloon, the Cleveland State bar where Crocus and his pals from the paper were morphing into minor celebrities.

By the summer of 1973, he craved the stage for himself. Thus was born the Great Bow-Wah Death Band, a revolving collective made up of Scene staffers. The inaugural show took place at the Viking on the paper's third anniversary. Crocus sang background vocals for a rendition of the Velvet Underground's "Sweet Jane," scatting the lyrics and contorting his face. Moments later, the mercurial Peanuts, a band publicist who served as Scene's "goodwill ambassador," came onstage and proceeded to sweep the entire band with a vacuum cleaner.

Okay, so you had to be there.

Offstage, Crocus increasingly became a pain in the ass -- a bitter recluse who lived in a one-room apartment with no phone. Fellow staffers could set their watches by the times he'd quit and storm out of the office, only to return a short time later. After constantly hounding Crocus to show up for work on time, Jim Girard eventually fired him. Twice.

"The final thing between he and I: I told him if he didn't get an alarm clock, then he couldn't work for me anymore. He said, ŒWell, I'm not getting a clock,' and that was it. He said, ŒFuck it,' and he left."

Some time later, a partially eaten pizza was discovered in his desk drawer.

Crocus Behemoth eventually reverted to his given name -- David Thomas -- and co-founded Rocket From the Tombs, long hailed as one of the world's first punk bands. As some of its members went on to form the Dead Boys, Thomas created the absurdist art-punk outfit Pere Ubu, perhaps the most influential band ever to rise from Cleveland.