Scene and the art of pissing people off. 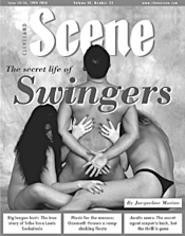 For three decades, Scene had been your trusted source for concert previews and Michael Stanley pictures. By 1999, we were suddenly something more: an outlet for news that other papers didn't print, for the stories that fell into the margins. Yes, we sometimes trolled the gutter.

One of the first features was the 1999 exposé "The Secret Life of Swingers," which uncovered Northeast Ohio's growing culture of mate-swappers. Despite the specter of AIDS and other unpleasantries, men and women -- husbands and wives, teachers and surgeons, plumbers and programmers -- were swinging in ever-increasing numbers. Writer Jacqueline Marino visited hotel gatherings, where attendees would browse veritable showrooms of flesh, then pair off in private.

"Staring isn't just welcomed, it's encouraged," she wrote. "Hands wander. Women kiss each other on the lips. Everyone cheers for the classic Jimmy Buffett refrain, ŒWhy don't we get drunk and screw.'"

There were pictures of butts.

The outcry came swift and furious.

"What's next on the cover, a grown man with a naked boy sitting on his lap!?" wrote one reader.

"Playboy would probably show more class in the way they would portray this article," opined another.

Still another submitted a cleverly retooled version of the cover, with the letters "Ob-" inserted before Scene.

The worst was yet to come. When deliverymen made their rounds with the following week's issue, 30 businesses shoved the papers back in their faces.

"The places would say, "We don't want this filth!'" remembers circulation director Don Kriss, who, after 30 years with Scene, knows filth when he sees it. In the span of one issue, 9,000 weekly papers lost their home. And six years later, the grudge smolders on.

Fanny's finally welcomed Scene back earlier this year; the others mostly still don't take our calls.

"The Secret Life of Swingers," incidentally, was the most highly read issue of the year.

Disappearing Acts
Of course, there are other ways to make papers vanish. "Fight Club," a cover story in March 2000, probed the tactics used by bouncers and doormen at the Basement, then a bustling nightclub on the East Bank of the Flats. Guests of the club, it seemed, had been treated to unprovoked beatings at the hands of the staff; numerous civil and criminal charges were pending -- among them attempted murder and assault.

This was not good for business.

The cover depicted a close-up of a fist with the words "Inside the Most Dangerous Bar in the Flats." The club's owner, Gary Bauer (now a partner at Flyy Bar in the Warehouse District), declined comment for writer Mark Naymik's story.

But "Fight Club" didn't live to see the sunrise over the Basement's neighborhood: Just hours after Scene boxes had been filled throughout the Flats and Warehouse District, all were promptly emptied. No one was caught, and the abducted issues were never seen again. Within a year, the Basement wasn't either.

The paper has also managed to piss off many a politician, but none more so than Summit County Republican Party boss Alex Arshinkoff.

The June 11, 2003 cover story, "Godfather in the Closet," written by Sarah Fenske, revealed numerous instances of Arshinkoff's strong-arm political tactics. Slightly more damning, it also recounted the hours after midnight on December 27, 2002, when Arshinkoff picked up a 21-year-old man seeking a ride home from Annabell's in Akron. Ignoring directions to the young man's house, Arshinkoff instead fondled his thigh and grabbed at his crotch. The ordeal ended when the guy leaped from Arshinkoff's Audi at a red light.

This, of course, wasn't the kind of news a conservative chieftain wants circulating -- especially one who's stumped hard for family values and anti-gay candidates.

Soon after the issue arrived on the streets, it just as quickly began to disappear around Akron. A caller to Scene's office implicated the Arshinkoff Family in the missing-paper caper, though no charges were ever filed.

The abduction of Scene, it turns out, has always been a bipartisan effort.

For years, the City of Eastlake has served up rich comic fodder at taxpayer expense. In one tidy decade as mayor, Dan DiLiberto reached out to his ailing city and whacked it in the knees -- promising a minor-league baseball team with no increase in taxes, then promptly bankrupting the city with unrepaid loans to make it happen. Stadium costs skyrocketed, city services were slashed, cops and firefighters got laid off -- and taxes went through the roof. It was the superfecta of municipal bungling, which Sarah Fenske and Thomas Francis chronicled in a series of stories from 2002 to '04.

Through it all, Eastlake officials held fast to their totalitarian principles; the first order of business was to squelch the press. Diane Miller, one of the good folks at Biagio's Donuts on Vine Street, recounted this tale in a 2004 letter:

"We always knew when Scene was writing about Eastlake. About an hour after Scene was delivered, a man associated with the city would come in and take all the papers. So as soon as Scene would arrive, we would look for articles on Eastlake. If there was one, we would hide the papers for an hour or so. After the man left, we would put them back out."