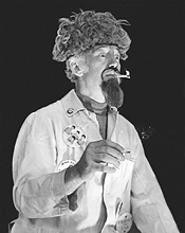 Now that the Browns are losing by a comfortable margin, we turn to more important sport: a fight over a fright wig and a glue-on goatee. A matter that threatens to forever cast a pall on Cleveland's B-movie legacy, or at least find a creative new way to bore us to tears.

Let us turn back the clock to 1963, when a Tasty Shop manager named Ralph Gulko was working on getting his hair and makeup license. Gulko dreamed of going to Hollywood someday to be cosmetologist to the stars. But for the time, he simply had to decide on his Halloween costume.

With a straw hat and press-on facial hair, he whipped up a getup and tried it out on his friend, Howard Hoffmann -- a former backup singer for Milton Berle and a weatherman on WJW Channel 8. Hoffmann wore it on the air as a prank.

Intrigued by the persona -- alternately dubbed "Professor Ghoulkoff" and "Ghoulardo" -- the TV station borrowed it and christened it "Ghoulardi." The character's Fu Manchu mustache and funny glasses became trappings for the wildly popular B-movie host personified by staff announcer Ernie Anderson. From 1963-'67, Anderson as Ghoulardi ragged on the films and blew up stuff in a starched-shirt town badly in need of a wrinkle.

Gulko, meanwhile, soon left town for what would be a long and fruitful career as the makeup artist for Johnny Carson -- only to resurface in Cleveland to nurse a grudge some 35 years later. He's seeking money and recognition from TV-8 and station owner 20th Century Fox for the use of the Ghoulardi image -- proving that, even after your dreams come true, you can still manage to feel left out.

In December 1998, Cleveland attorney Warren Sklar sent a letter on behalf of Gulko, demanding unspecified compensation for his client. The station and promoters of the local Ghoulardifest -- an annual tribute to the TV show housed in a glorified goat barn at the county fairgrounds -- didn't formally respond to the letter, though Fox did reject his claim.

But during the ensuing months -- at least in part because of the letter -- they dropped "Ghoulardifest," changing the name to the Big Chuck and Lil' John Sci-Fi Comedy Fest, after the kielbasa comedians who organize the event. This year, under the new banner, festival vendors still include the same movie-poster shops and purveyors of rubber chickens. The celebrity lineup is topped by the guy who played R2-D2 in Star Wars and a guy who played an Ewok in Return of the Jedi.

Ron Sweed, who plays Ghoulardi knockoff the Ghoul on Channel 55, clearly remembers Gulko from the inaugural 1997 Ghoulardifest: He was the guy "running around and yelling "I've been ripped off,' talking to anybody that had a video camera.

"Big Chuck" Schodowski, who worked at WJW in the early '60s, says Gulko hung around the station for about a week back then, gluing on Anderson's beard.

To Gulko, it was one big week: Snubbed by the station, he says he left Cleveland in 1963 with a broken heart.

Hoffmann, who's still friends with Gulko, says that television is a "back-stabbin' business" and his buddy should have moved on years ago. "The station has changed hands, and Ghoulardi's dead -- what's he gonna get out of it?" he says. "That's my opinion, and I was the best man when he married one of his wives."

Gulko says he just wants "complete recognition." "I came up with Chaim A. Ghoulkoff and Professor Ghoulski," he says. "I came up with Ghoulardo on the same night, and [the station manager] asked me if it was OK if he took the O off and put in an I, and I said no problem."

Maybe he should buy a vowel. -- Putre

The Big Chuck and Lil' John Sci-Fi Comedy Fest takes place Saturday and Sunday, October 9 and 10, at the Cuyahoga County Fairgrounds in Berea, one mile west of the Bagley Road exit off I-71. Admission is $10, call 440-891-1313.