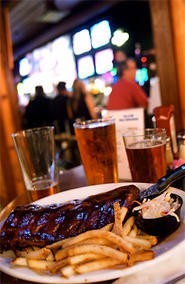 Cruise the streets, catch a game, quaff some brews: If there's a simple recipe for warm-weather fun in downtown Cleveland, that's probably it. Of course, the necessary ingredients include having a sports team worth watching; this spring, both the Indians and the Cavs have filled that bill. The other requisite is a few good sports bars, those laid-back eateries where the beer is cold, the food fried, and the tellies tuned to anything that has balls, helmets, or roaring engines figured prominently.

Fortunately, Gateway has sports bars aplenty. Among the options: a Harry Buffalo, one of four locations of a locally based chain specializing in bison burgers; a recently opened Cleats Club Seat Grille, another locally based chain, known for wings; and Local Heroes, an independently owned operation which took over the former Alice Cooperstown space.

All three spots offer basic bar grub. All three are noisy, casual, and friendly. And all three feature a solid selection of brew, in bottles and on draft. Still, there are differences. We recently visited each, comparing the food, drink, and digs. Here's how they scored:

If sports bars had built the food pyramid, salt, grease, and barbecue sauce would be its foundation. Clearly, this is not cuisine for sissies, among whom we'll count vegetarians, the health-conscious, and those who prefer eating with utensils. On the other hand, it's uncomplicated, familiar, and plays well with beer -- and isn't that the whole point?

Within those parameters, when it comes to variety, Harry Buffalo has it all over the competition. The illustrated menu is a whopper, crammed with burgers, wings, wraps, pizza, quesadillas, salads, and entrées like barbecued ribs, bison steak, and even a perch and pierogi dinner.

Don't expect diners from nearby Lola to suddenly rush the joint. But the well-prepared offerings go far beyond the basics, with interesting riffs on the tried-and-true that include rich and cheesy pita-bread nachos ($6.99), slathered with cream cheese, melted provolone, and neatly diced veggies; and a grilled portabello wrap, a meat-free mélange of mushroom, roasted red pepper, caramelized onions, provolone, and basil mayo, in a sun-dried tomato tortilla ($8.99). Lean yet very tender, a half-pound bison burger was fragrant, flavorful, and vaguely sweet; a dense pretzel-bread bun added heft ($8.99). And as a side, sweet-potato wafer fries, dusted in powdered sugar, were almost as good as pumpkin pie ($1.99).

At Cleats, the focus is on novelty. There's a host of not-so-usual sandwiches, including fried bologna, Italian beef, and the signature Roast Caesar Melt ($8.99), a succulent stack-up of tender roast beef, crunchy bacon, and Caesar dressing on buttery toasted bread. And then there's the aptly named Garbage Dumpster, with five pounds of ground beef, cheese, slaw, fries, onions, mushrooms, and bacon piled onto a loaf of bread. But a pulled-pork sandwich was greasy and bland, and the eight-ounce Cleats Burger was merely average.

On the other hand, spud nuts will have a field day here, scarfing down crisp-edged kettle chips and long, golden, fresh-cut fries, served up in naked splendor or buried beneath an avalanche of optional add-ons. If your arteries can tolerate the splurge, try the "loaded" version, blanketed with melted cheese and bacon bits ($1.99). Beware the Cajun fries, however: An onslaught of harsh-tasting seasoning salt obliterated all traces of honest, potato-y goodness.

Of the three bars, Local Heroes' menu seems the most pedestrian. On the plus side, a candied walnut and grape salad -- ordered and served, for a vegetarian companion, sans the featured chicken -- was notably fresh, crisp, and generously appointed ($8.49). And a trio of fish tacos ($8.49), starring moist cod inside a bready but well-seasoned beer batter, made a relatively light alternative to the usual burgers and ribs. But mealy, frozen fries were a bore, frozen potato skins were vastly under-accessorized, and baby-back ribs were overcooked and mushy. Only dessert was a standout: A gigantic sundae, made with Nabisco Oreo brownies, Good Humor ice cream, chocolate sauce, and a pouf of whipped topping ($4.99), it offered a blast of sweetness without a cloying aftertaste.

Think sports bar, think wings. And predictably, all three eateries make big claims for their version: "World Class" at Local Heroes, "World's Best" at Cleats, and "Taking Wings to the Next Level" at the Buffalo. Yet none of them hit a homer with our posse.

We loved the spicy butter-and-Tabasco flavor of the buffalo-sauced wings at Local Heroes. Still, the wings were on the small side, somewhat overcooked, and a little too dry. (Twelve wings, blue cheese, and celery: $7.49; choice of 11 sauces.)

At Harry Buffalo, the wings were considerably larger, and between a spicy dry rub and the slightly sweet, bourbon-barbecue glaze, the flavor ante was high. But while the wings were moist and tender inside, the exterior lacked much in the way of desirable crunch. (Ten wings, blue cheese, and celery: $6.99; all wings come dry-rubbed, with a choice of 14 sauces.)

And finally, at Cleats, an order of buffalo-ranch wings offered hefty size, zesty, well-balanced flavor, and a crisp exterior. But while the two-bone tips were fine, the drumlets seemed rubbery. (Twelve wings: $6.99, blue cheese and celery extra; choice of five dry-seasoning rubs and 17 sauces.)

Like your sports bar spacious and well-appointed? Head to handsome Local Heroes, its red-brick walls hung with scores of jerseys, photos, and assorted memorabilia celebrating the region's sports teams. The satellite-radio soundtrack of classic rock was too loud for comfortable conversation, and the flickering of 50 televisions threatened to induce seizures. Still, seating was comfy, service was friendly, and the separate bar and dining room have character to spare.

At the other end of the field, you'll find tiny Cleats, a single, potentially claustrophobic room that feels even snugger, thanks to dark green walls, a black floor, and a horseshoe-shaped bar that dominates the space. Square-footage limitations aside, designers still managed to cram in a half-dozen tellies, a couple video games, and a well-stocked jukebox. While the booths lacked elbow space, prompt, friendly service was a plus.

And finally, at Harry Buffalo, soaring walls of removable windows give the barroom an airy, Put-in-Bay type of charm that belies its urban location; with plenty of old brick, corrugated metal, and rustic oak woodwork, the eatery also channels a sort of Old West vibe. Count on a full complement of sports- and news-tuned TVs, and the usual classic rock playing in the background.

As the largest, most interesting beer roster, featuring plenty of craft-brewed options, Local Heroes' takes our top prize. On tap, the 15 choices include Goose Island Honkers Ale, Rogue American Amber, and Thirsty Dog Hoppus Maximus. In bottles, the 27 labels include Great Lakes' Elliot Ness, Burning River, and Edmund Fitzgerald. During Happy Hour (3 to 9 p.m. Monday through Friday) most beers are $1 off.