Layer Cake is a hearty, confounding slice of the British underworld. 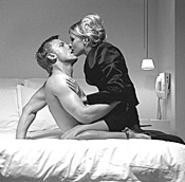 Layer Cake, the new British crime drama from first-time director Matthew Vaughn, is a block of granite struggling to liberate its inner statue. Vaughn (producer of Snatch and Lock, Stock and Two Smoking Barrels) has plenty of dark threat and compelling visual style, but his ambitious trip into the London underworld is so tricked-up with double-crosses, hidden motives, vengeful secrets, and class-conscious social commentary that it bewilders more often than it intrigues. By the time the final credits rolled, I was exhausted by the effort of trying to unravel the thing. As a result, it had lost much of its tense momentum. The frequently impenetrable dialects of British coke dealers and street-bruised junkies compounded the problem for this tone-deaf Yank: When you don't know what a tough guy is saying, it's hard to know why he's saying it.

Of course, I still haven't figured out all the twists and turns in The Maltese Falcon and The Usual Suspects, so maybe I should shut up and leave the deeper mysteries of life and larceny to those with more sensitive antennae. On the other hand, Layer Cake has some attractions that defy logic, so let's plunge on for a few more paragraphs before yielding the hall to the philosopher and the puzzle expert.

In any top-of-the-line crime movie, atmosphere tends to outrank both plot and character, and that's the case here. The sordid London Vaughn throws us into comes furnished, top to bottom, with the kind of paranoia, nastiness, and greed that spell Drugs with a capital D. The film's nameless protagonist (The Jacket's Daniel Craig), who does double duty as narrator, lets us know right at the start where he stands: "I'm not a gangster," he scoffs. "I'm a businessman whose commodity happens to be cocaine. I deal only in kilos."

His big-shot credentials established, he proceeds to run afoul of even bigger shots when he's required to do two favors for a cigar-chomping kingpin named Jimmy Price (Kenneth Cranham). Apparently, our man is to track down the drug-crazed daughter of another mob boss, Eddie Temple (the faultless Michael Gambon), and he's to strike a deal involving a million doses of Ecstasy with a small-time throwback called Duke (Jamie Foreman), who has the social graces of a starving hyena and a hysterical girlfriend sheathed in red leather. This is where Layer Cake's tangles of motive and power play start to run amok. By the time the first two or three malcontents have been shot to death, you may find yourself wondering who did what to whom and why.

One explanation for the film's bewildering overcomplication may lie with Vaughn's inexperience at the helm; another in the acknowledgment by the movie's writer, J.J. Connolly, that he found almost everything in the novel he was adapting so compelling that the first draft of his screenplay was 400 pages long -- seven hours' worth of movie. The author of the novel? J.J. Connolly himself. For him, 110 minutes of screen time may not be enough to make art. It's certainly not enough to make sense.

Best, then, just to go with the bloody flow here, revel in the vivid performances by Craig, Gambon, Cranham, and half a dozen lesser thugs, and not think too deeply about the dramatic unities or the tug of consequence. As a stylist, Vaughn draws on various solid sources. He seems to have absorbed both the extroverted violence of modern classics like Brian DePalma's Scarface and the sly narrative tricks of Martin Scorsese: His narrator has to have watched Casino a few dozen times. But even amid all the bloodletting, this remains a distinctly British piece of work -- in its cool manner and its sometimes startling erudition. These gangsters drink tea -- and not just as an excuse to throw a boiling pot of the stuff in the face of an enemy. Clearly, they've studied the ups and downs of the Roman Empire: "If you seek peace," the narrator advises, "plan for war." They're even conversant with mythology and Christopher Marlowe: Can you imagine a Hollywood gangster movie in which the guys with the double-parked noses start talking about Faust?

As for Connolly's title, it's both sociological and metaphorical: All layers, all strata of society are corrupted (or artificially exalted) by the drug trade, he implies. But then, we've seen that before, most recently in Steven Soderbergh's Traffic.

By the time Vaughn stages a fiendishly clever assassination scene involving cell phones and sniper rifles in a lovely London park, you too may be overwhelmed by Layer Cake's morass of detail -- drugs, kidnapping, murder, Third World intrigue, sin in high places -- but you may also be taken by the power of its spell. What's a seemingly random shooting or a baffling turn of plot here and there, when a film commands you to watch? This young director has a terrific future. What he needs now is a writer who hasn't fallen in love with every word of his own -- or a script girl with a sharp blue pencil.