with Vertical Horizon and Splender. Tuesday, July 18, at the Nautica Stage. 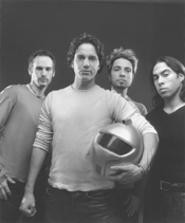 Singer Stephan Jenkins may be the most arrogant white guy making records today. The Third Eye Blind frontman consistently proclaims his band's musical integrity and his own punk cred, all the while dating leggy actresses and generally acting like a jackass. He conceitedly struts through Third Eye Blind videos, posing unremittingly. And he believes his band's two albums -- 1997's self-titled debut and last year's Blue -- are really going to matter five years from now. What Jenkins doesn't realize is the instant disposability of the first album's string of hits, led by the once-inescapable "Semi-Charmed Life." By jacking up the sincerity on Blue, he cut out whatever semi-charm Third Eye Blind had. Save for the ultra-catchy "Never Let You Go," the big, bad hooks have been replaced by big, bad statements. They say little and mean even less. For Jenkins to believe that the San Francisco quartet has any more relevance than rivals Matchbox Twenty is foolish. Chances are you'll hear all the group's best-known songs sloppily executed, disguised as some sort of punk ethos. Don't be misled, though. It's really a desperate move in the post-alt-rock climate to develop style, and that might be the only thing Jenkins knows about.