This Spud's For You 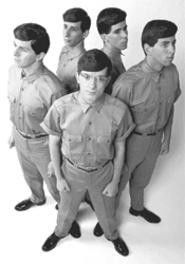 Northeast Ohio has spawned its share of iconic rock groups, but the world has still never seen or heard anything quite like Devo. Local boys who studied art at Kent State, frontman Mark Mothersbaugh and bassist Jerry Casale formed Devo for a one-off performance in 1972 and turned the idea into a band the following year. An art-rock group in a bar-band area, Devo used primitive synthesizers and electronic drums of its own design to perform irradiated new wave and mutated rock covers.

Supporting the new Devo Live 1980 DVD-CD, the band has reunited (with Perfect Circle/Vandals/Sting drummer Josh Freese behind the drum kit) for a short summer tour. Casale is excited to be back in Ohio for the band's first concert in the area since Lollapalooza 1997.

"Devo couldn't have come out of L.A. or New York," says Casale, accenting the second syllable of the band's name. "Cleveland and Akron are like the boot camp to the world. If you can survive those places and still be a functioning human being, you can go anywhere. It's pretty brutal. It was industrial then, and it was very blue-collar, and it was very hostile to creativity. So the bands that had the balls to do something in the face of the rejection and threats really got strong."

Devo's 1980 smash single "Whip It" technically makes the band a one-hit wonder, but the group has a loyal worldwide following among serious music fans, and its songs have been covered by Nirvana, Rage Against the Machine, and Soundgarden, to name a few. The band left Akron in 1977, but it's still an influence in the area. Scene talked to Akron and Cleveland bands from the last 35 years to discuss Devo, its impact, and legacy.

Robert Kidney, founder, 15 60 75 (aka the Numbers Band)
Devo connection: Booted a pre-Devo Casale from the Numbers Band.
"[Casale] was trying to make my band -- which I formed two years before he was in it -- into a conceptual band. He wore a gorilla mask onstage after we decided we weren't going to do it, and that was that. When I look back at it now, what I'm impressed with is how Devo came from where they came from and got where they got. It's a phenomenal thing. And he set out to do that. That was not a fluke."

Pat Carney, drummer, Black Keys
Devo connection: Former Mark Mothersbaugh stalker.
"The year they played Lollapalooza and played at Blossom, I had to work that day. I read an interview in the Beacon with Mark Mothersbaugh that said they'd be staying at their parents' house. So I called all the Mothersbaughs in the phone book and asked for Mark, and I finally got ahold of him. He was really polite. And that night, we decided to go to the address of that phone number. We pulled up the driveway, and his sister came out and started calling us Booji Boys. And Mark came out and started to apologize for his drunk sister, and making fun of us also, calling us spuds. It was better than seeing the concert."

Cheetah Chrome, guitarist, Rocket From the Tombs/Dead Boys
Devo connection: Pantsed Mark Mothersbaugh, but says a legendary Devo-Dead Boys feud was actually more of a fracas.
"That's gotten so blown out of proportion. There was one minor incident on New Year's Eve at the Crypt. We were drunk, we thought Devo was funny. My roadie dared me that I couldn't pull [Mark Mothersbaugh's] pants down while he was doing his Booji Boy thing. So I made a dash out of the crowd, pulled down his shorts, and next thing I know, I'm getting pummeled by these Devo fans. I dropped into a fetal ball and crawled back to the bar and watched the Devo fans and Dead Boys fans go at it."

Buzz Clic, guitarist, Rubber City Rebels
Devo connection: Mark Mothersbaugh was the soundman for Rebels precursor King Cobra. Members of the Rebels owned the Crypt, the Akron bar that was the site of Devo's first shows.
"I thought they were really funny and more than a bit bizarre -- truly innovative for the time. I remember seeing them at the Forum in L.A., a pretty large venue, 14-15,000 seats, a sold-out show. I was always impressed at how far they had come from those early shows, and yet they had remained the same too -- true to their original concept, only much bigger."

Skinny, drummer-programmer, Mushroomhead
Devo connection: His band's stage attire often gets more attention than its music.
"It was pretty inspirational to see someone from down the street who pulled it off and did it. Those guys were breaking ground, incorporating keyboards and strange and kooky sounds. Even today, when you turn on a Devo song, you know it's Devo. Nobody else sounds like that. Not to mention their wacky-ass costumes. When everyone dresses the same, you make more of an impact as a unit, as a solid piece."

Nick Nicholis, singer, the Bizarros; founder, Akron label Clone Records
Devo connection: Has been covering "Mongoloid" for nearly 30 years.
"I think they made a lasting musical impression. Very original. They helped put Akron on the musical map. Tin Huey, the Bizarros, Rubber City Rebels, and the Waitresses all got major record-label deals."

Dwid Hellion, singer, Integrity
Devo connection: Appreciates a good multimedia production.
"I think their greatest contribution, besides simply being Devo, was the [use of the] electronic drum. They changed the world's use and perception of percussion."

Human Furnace, singer, Ringworm
Devo connection: Tipped his hat to a Devo song, listing himself as "Mr. DNA" on Ringworm's first demo.
"Devo is still some of the most innovative and creative music ever made. Devo helped mold me and a lot of my friends into the fine young spuds we are today."

David Thomas, singer, Rocket From the Tombs/Pere Ubu
Devo connection: Not a big fan.
"I like passion. That's not something Devo were known for. They used to do a song that you might describe as poignant, called something like 'Words Get Stuck in My Throat.' As I remember, they dropped it. It's a side to their work that was stifled. I was disappointed. I didn't really care for the whole mutant thing, though it was clearly well designed. Simply not to my taste."

Larry Gargus, singer, Don Austin
Devo connection: Covered "Slap Yo Mammy."
"There's nobody like Devo. They didn't write concept albums, but there was an ideology and a concept behind what they were doing. At the time, most concept-driven albums were these big sword-and-sorcerer fantasies or operatic stories. Devo were making a comment on society -- people devolving instead of evolving, that sort of thing. Devo had a plan."

Ultimate Donny, frontman, Gil Mantera's Party Dream
Devo connection: Uses synthesizers to deconstruct pop music one note at a time.
"I was just a kid when I was first introduced [to Devo], and absolutely loved nearly every song from the first five albums. Sometime around '94, I was singing and playing guitar in a band that tried to cover 'Gates of Steel.' It didn't work out so well. We decided that doing Devo was best left to Devo."

David Giffels, Akron Beacon Journal
Devo connection: Co-author of the 2003 book Are We Not Men? We Are Devo!
"Devo made this beautiful counterpoint to the mainstream of the '70s . . . Their [original] drummer, Alan Myers, gave them a real ballsy aspect that a lot of electronic bands lack. He was technically good, but he was also a badass, hard-playing drummer that they've never been able to replicate. Bob One, Bob Mothersbaugh, came from a Rolling Stones-Chuck Berry bar-band kind of background, but the way he plays in that band, he manages to take all that stuff and twist it 45 degrees, so it still sounds like what rock and roll sounds like, but it's so much different."