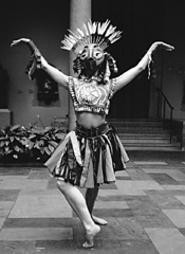 "I want the audience to laugh with them, not at them," says Flip Orley, the self-proclaimed comic/hypnotist, in reference to his onstage hypnotees. "The volunteers are my partners, not my victims. Each is treated with respect and gentility." Who wouldn't want to be put under by this guy? Orley also shrewdly promotes a pair of CDs, which he says will help you sleep better, stop smoking, and lose weight. His stage show, however, sticks to lighter fare. He probably won't make you cluck like a chicken, but he will make you laugh. Orley is at the Improv (2000 Sycamore Street in the Flats) through Sunday. Show times are 8 tonight and Sunday, 8 and 10:15 p.m. tomorrow, and 7:15, 9:30, and 11:30 p.m. Saturday. Tickets are $15 and $16; call 216-696-4677.

The Great Lakes Brewing Company has a weekendful of parties for dead people. Tonight's Shakespeare Birthday Benefit (at 7) celebrates the Bard's 439th birthday a day early, with a performance by 2 Skinny Dorks, a silent auction, and cake. The party, which marks the start of the Cleveland Shakespeare Festival's sixth season, costs $30 (call 216-240-1113). On Saturday, the brewery hosts the Eliot Ness Centennial Birthday Bash, a benefit for the Western Reserve Historical Society and the Cleveland Police Museum. Period dress is encouraged; there's a Ness look-alike contest, along with a Ness documentary, Ness-era artifacts, and plenty of Great Lakes' fine beer, named in honor of the famed lawman. It starts at 7 p.m. Tickets are $50; call 216-771-4404. Great Lakes Brewing Company is at 2516 Market Avenue in Ohio City.

In Blind Spot: Hitler's Secretary, 81-year-old Traudl Junge recounts her stint -- as a naive 22-year-old in 1942 Berlin -- as Hitler's personal assistant. Simultaneously condemning her old boss (she calls him "a monster" at one point) and her own gullibility, Junge recalls things she's kept silent about since the end of World War II. Blind Spot's filmmakers wisely let Junge do the talking: There are no documentary-style cutaways, no archival footage montages, and no attempts to judge Junge's role within the Nazi regime. It's just Junge -- who died shortly after the film premiered last year -- pouring out nearly 60 years of regret. The message is clear: It's easy to get caught up in wartime madness. Blind Spot is at the Cleveland Cinematheque (11141 East Boulevard) at 7 tonight and 5 p.m. tomorrow. Admission is $7, $4 for members. Call 216-421-7450 for more information.

The Cleveland Museum of Art's annual Circle of Masks celebration not only provides an opportunity to make carnival-type masks; it boasts a variety of cultural dance performances throughout the day. The festival, a prelude to June's Parade the Circle fest, focuses on carnival characters from Old Mas (a traditional acclamation of mankind) and concludes with an audience-interactive dance presentation, where you get to show off your new mask and some fancy moves. It takes place from 1 to 4 p.m. at the Cleveland Museum of Art (11150 East Boulevard). Admission is free. Call 216-421-7340 for more information.

Walter Mosley has written some of the best crime novels of the past decade, with his hero, Easy Rawlins, anchoring a half-dozen books since 1990's Devil in a Blue Dress. Los Angeles is Mosley's playground, which is open to the period interpretation of his choice (his latest Rawlins mystery, Bad Boy Brawly Brown, is set in 1964); his characters settle into the atmosphere as if it were their birthright. It's modern noir at its most nostalgically gratifying. Mosley speaks at 2 today as part of Cleveland Public Library's Afternoon for Writers and Readers Series. It takes place at the Main Library (325 Superior Avenue). Admission is free; call 216-623-2869 for more information.

The Rock and Roll Hall of Fame's Hang on Sloopy: The Music of Ohio extends the borders of its recent Cleveland music exhibit beyond the North Coast. "People from Ohio will be familiar with a lot of the bands," says curator Jim Henke. "And visitors from out of state will get a little more insight into what's going on in Ohio. Plus, it's tied into Ohio's bicentennial this year." Representing regions from Dayton (Ohio Players, Guided by Voices) to Akron (Devo, Chrissie Hynde) to Canton (Macy Gray, the O'Jays), Hang on Sloopy -- named after the Dayton-based McCoys' song that became the official state rock song in November 1985 -- is a statewide celebration. "It starts with Dean Martin's tuxedo," says Henke, "and ends with an outfit from Marilyn Manson." The Rock and Roll Hall of Fame and Museum (1 Key Plaza) is open from 10 a.m. to 5 p.m. daily. Admission is $11.50 to $15. Call 216-515-1930 for more information.

When The Blue Room comes to the Cleveland Play House, it won't be Nicole Kidman's bare butt onstage, as it was during the play's 1999 run on Broadway. But somebody's ass will be hanging out, beginning with tonight's premiere. Director Edward Payson Call stays true to the play's randy roots, keeping nudity and sexual situations intact. "All of this disguises the fact that it's a very profound play," he says. "It's less about copulation than it is about how we lie, cheat, and betray ourselves and other people." The Blue Room, David Hare's update of Arthur Schnitzler's La Ronde, features one actor and one actress portraying all the roles in a 10-scene tale that bridges one casual sexual encounter with another. And another, and another. The Blue Room is at the Baxter Stage (8500 Euclid Avenue) through May 25. Show times are 8 p.m. Tuesday through Friday, 4 and 8 p.m. Saturday, and 2 p.m. Sunday. Tickets range from $12 to $47.50, available by calling 216-795-7000.

Ice cream is good. Free ice cream is better. Baskin-Robbins is hosting a Free Scoop Night from 6 to 10 p.m. All you have to do is walk into any Baskin-Robbins, ask for a free scoop, and it's yours. No questions asked! You score gratis food, and First Book, a group that provides books to kids from low-income households, scores contributions from Baskin-Robbins for each scoop handed out. Visit www.baskinrobbins.com for more information.