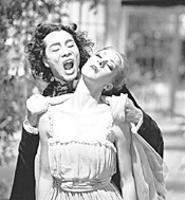 The Haunted School House and Haunted Laboratory have been scaring the crap outta folks for 30 years. Now they're celebrating three decades of trouser-fouling with more than 100 monsters scattered throughout the 10-acre premises. The lab has four floors, the house has three, but the shocks are evenly divided. There's also a snack bar, perfect for filling up before or, preferably, after the scares. The Haunted School House and Haunted Laboratory are at 1300 Triplett Boulevard in Akron. They're open from 7 to 10 p.m. Thursday and Sunday, and 7 p.m. to midnight Friday and Saturday, through November 2. Admission to each is $9.75. Call 330-849-0211 for more information.

Guy Maddin's Dracula: Pages From a Virgin's Diary isn't your typical vampire film. While it invokes the silent classic Nosferatu in style (irises and grainy film stock abound) and function (it's silent and shot in black and white), it's actually a ballet masked as a horror flick. The Royal Winnipeg Ballet's interpretation of Bram Stoker's goth novel is inventive -- and setting it all to Wagner's music is inspired -- but Maddin's active camera hogs most of the attention. When it isn't swooping down on actors and dancers or frolicking with a bunch of gargoyles, it's doing tricky things with overexposure and colors (blood appears red onscreen). It's a stylistic feast. Dracula plays at the Cleveland Cinematheque (11141 East Boulevard) at 7:30 tonight, 8:45 tomorrow, and 9:10 p.m. Sunday. Admission is $7, $4 for members. Call 216-421-7450 for more info.

Thirty-four years ago, in honor of baseball's 100th anniversary, fans voted Bob Feller the greatest living right-handed pitcher. The career-long Indian, who won 266 games despite missing three seasons for military service, still ranks right up there. The spry 84-year-old will appear at today's Cards & Collectibles Show, where all proceeds from Feller's signatures ($12 to $40 each) go to the Holy Trinity Education Endowment Fund. There will also be a Harley-Davidson drag-racing motorcycle, and the Avon Police Department will offer fingerprinting for kids. The show runs from 11 a.m. to 8 p.m. at Holy Trinity Church (33601 Detroit Road in Avon); Feller signs from 6 to 8 p.m. Admission is $1. Call 440-937-6805 for more information.

With more than 75 dealers from throughout North America, this weekend's Cleveland Fall Antiques Sale & Show is one of the city's largest gatherings of expensive old stuff. The show has a huge selection of English, country, oak, and Victorian furniture, as well as porcelain, art glass, Tiffany items, paintings, books, textiles, jewelry, rugs, lamps, and more. It runs from 11 a.m. to 7 p.m. today and 11 a.m. to 5 p.m. tomorrow at the CSU Convocation Center (2000 Prospect Avenue). Admission is $8. Call 216-622-0670 for more information.

For book junkies, there are few things more life-affirming than the Cleveland Public Library's annual Fall Used Book Sale. Confronted with thousands of books of every conceivable variety -- Art collections? Check. Mystery novels? Check. Chick lit? Check -- you'll find it easy to walk away with at least a bagful or two. The sale starts today and runs through Wednesday; if you can hold off till the final day, a bag of books goes for only $3. Sweet deal! The Fall Used Book Sale runs from 1 to 5 p.m. today, 9 a.m. to 6 p.m. tomorrow and Tuesday, and 9 a.m. to 3 p.m. Wednesday at the Cleveland Public Library (525 Superior Avenue). Admission is free. Call 216-623-2869 for more information.

The Lake Erie Nature & Science Center's Bats in My World exhibit is an interactive primer on the flying, furry mammals. Included are tons of hands-on activities where kids can sniff out a baby bat, learn what bats eat, and try on a pair of bat ears. Alas, there are no real bats here. "They're very difficult to care for," explains the center's Julie Ferguson. "They have to be hand-fed, and it would be very difficult to keep them here." Bats in My World is at the Lake Erie Nature & Science Center (28728 Wolf Road in Bay Village) through January 3. It's open from 10 a.m. to 4 p.m. Admission is $5, $3 for kids; call 440-871-2900.

Nickelback takes a lotta shit for playing radio-friendly, hook-driven alt-rock circa 1995. But stacked against its mainstream rock competition -- Staind? Disturbed? Smile Empty Soul? -- the Canadian quartet sounds positively revolutionary. Its new album, The Long Road, pretty much follows the formula that made 2001's Silver Side Up a ubiquitous commodity: hit single ("Someday"), chunky riffs, and earnest-to-goodness vocalizing by singer Chad Kroeger. And while nothing on The Long Road is as determined as "How You Remind Me" (last year's most-played song, which you'd know if you ever turned on the radio), its collective rock is on a roll. Nickelback plays James A. Rhodes Arena (373 Carroll Street in Akron) at 7 tonight. Three Days Grace and Trapt open. Tickets are $28.50, available by calling 216-241-5555.

Jasper Johns often used numbers, flags, targets, and maps to get his points across. The postwar painter developed collages that challenged the way audiences viewed symbols and shapes. Jasper Johns: Numbers, at the art museum, gathers, for the first time, his numerical-series work from 1955 to 1963. "This was a real seminal period in Johns's art," explains co-curator Carter E. Foster. The approximately 30 works on display actually include more than 120 individual pieces, since many of them belong to a series. "It feels like a larger show," Foster says. "And it's a rare chance to see major work by this artist in Cleveland." Jasper Johns: Numbers is at the Cleveland Museum of Art (11150 East Boulevard) through January 11. It's open from 10 a.m. to 5 p.m. daily (closed Mondays). Admission to the museum is free; the show costs $3 to $7; call 216-421-7340.