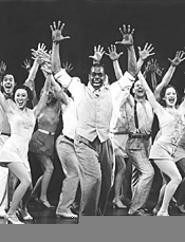 There are some similarities between the two painters featured in Worlds Apart: Gloria Plevin and Phyllis Seltzer, on display at the Artists Archives of the Western Reserve."There's real attention to the world we live in," offers Plevin. "We both have that." But their distinctions are more pronounced: Plevin favors snowy landscapes, Seltzer prefers busy cityscapes; Plevin's work is cozy and soft, Seltzer's is brittle and angular. "We bring very different personalities and points of view to our work. There's a lot of contrast between the coolness of my work and her warmth." Worlds Apart is at the Artists Archives (1834 East 123rd Street) through February 14. It's open from 10 a.m. to 4 p.m. Monday through Friday and noon to 4 p.m. Saturday. Admission is free. Call 216-721-9020 for more info.

Junior Kerouacs get their Beats on at tonight's Slam U!, a poetry clinic and slam for teens age 12 to 19. "It's a great opportunity for them to be in the center," says Colleen Porter, Playhouse Square's director of education. "And they're surprisingly experienced." Local slam-master Michael Salinger dispenses tips and leads a freestyle competition. (The winners return to the stage in a few months for another slam.) "There's no censorship involved," Porter says. "We let them have it." Slam U! happens 7 to 9 p.m. at Playhouse Square's 14th Street Theatre, 2037 East 14th Street. Admission is free. Call 216-348-7912 for more information.

"In Search of Ice Age Americans" takes its cue from such movie classics as Iceman and Encino Man. But instead of Timothy Hutton and Brendan Fraser re-creating the crazy antics of prehistoric man, Kenneth Tankersley, an anthropology prof at Northern Kentucky University, talks about what it was like to live millions of years ago. Tankersley spent more than two decades researching the subject (undoubtedly poring over the funny pages' B.C. and scanning oldies radio stations in search of DJs spinning "Alley Oop") and came up with countless artifacts, tons of new info, and a book. He talks about his findings at 7:30 at the Cleveland Museum of Natural History, 1 Wade Oval Drive. Tickets are $7 and $8. Call 216-231-1177 for more information.

Terence Blanchard is among the most reflective of modern horn players. He's played with Lionel Hampton and Art Blakey's Jazz Messengers, but it's his film scores for Spike Lee's flicks (including Do the Right Thing, Jungle Fever, and Malcolm X) that elevate him above the pack. Contemplative, passionate, and nostalgic, Blanchard is a trumpeter with a sense of history and jazz's place in it. His touring quartet features guitarist Lionel Loueke, so expect a harder-bopping combo onstage when Blanchard performs at 8 p.m. at the Cleveland Museum of Art's Gartner Auditorium, 11150 East Boulevard. Tickets are $19 and $27, available by calling 216-231-1111.

Marlene Dietrich and director Josef von Sternberg made some great films together. The Blue Angel, the first and best of them, explores the downfall of a university teacher after he becomes infatuated with a cabaret singer. Most of their other collaborations follow suit, taking in the repercussions of bad choices made by otherwise clear-thinking men, once they catch a glimpse of Dietrich's famous gams. The Cinematheque is showing seven of their movies over the next month. Tonight's offering, 1931's Dishonored, is a wartime story about a sexy Austrian spy (Dietrich, of course) and her adventures in Russia. It's one of von Sternberg's most lax films, but his innovative camera tricks and lighting keep it visually exciting. Dishonored screens at 7 at the Cleveland Cinematheque, 11141 East Boulevard. Tickets are $5 and $8; call 216-421-7450.

Martin Luther King Jr. Day means cool perks at institutions around town. Many of the city's museums and historical venues offer free admission and special events all day. Topping the list of places to visit is University Circle, where the Western Reserve Historical Society, the Crawford Auto-Aviation Museum, and the Children's Museum are opening their doors for free. The Museum of Natural History (1 Wade Oval Drive) will host a family-friendly Winter Discovery Day, gathering a bunch of scientific and historical activities and relics, as well as some really smart folks to talk about 'em. But it's still gonna cost you a buck to get into the planetarium. Call 216-231-4600 for more info.