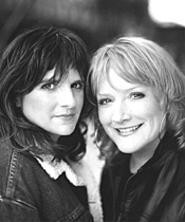 Indigo Girls Amy Ray and Emily Saliers have been making records about love, life, and the line between for more than 15 years now. On their ninth album, All That We Let In, they stick close to the things they believe in: ringing harmonies, the diplomatic and democratic division of vocal duties, and the cleansing effects of heartbreak (who knew a song called "Heartache for Everyone" could be so jaunty?). In concert, their dependable, slightly tattered folk tunes about life and how to live it are even more resonant, making a connection with their audience that's both genuine and lasting. Hear for yourself when the Indigo Girls play Tower City Amphitheater (351 Canal Road) at 7:30 tonight. Tickets range from $17.50 to $35, available by calling 216-241-5555.

Lake Metroparks' PGIF (Penitentiary Glen Incredible Fridays) takes a different wildlife subject -- like dragonflies, butterflies, and bees -- each week this summer and builds a program around it. Crafts, hikes, and up-close encounters with critters figure into the action. It's all about reptiles and amphibians today, and you can bet there'll be visits by snakes, lizards, frogs, and other signs of the looming apocalypse. It starts at 1 p.m. at the Penitentiary Glen Nature Center, 8668 Kirtland-Chardon Road in Kirtland. Admission is free. Call 440-256-1404 for more information.

Sixty-two years ago, the von Trapp Family Singers (the tuneful clan whose story is told in The Sound of Music) performed at Stan Hywet. This weekend, their grandchildren return for a trio of shows. The von Trapp Children include three girls and one boy (ages 8 to 14) who were raised in Montana. The situation's a little different from Grandma and Grandpa's Austrian Alps adventures (Nazis aren't as ubiquitous in the Treasure State), but that doesn't keep the kids from tossing traditional folk songs into their repertoire. Also expect to hear plenty of tunes from the Oscar-winning 1965 movie. The hills of Stan Hywet Hall & Gardens (714 North Portage Path in Akron) come alive at 7 tonight and 2 and 7 p.m. tomorrow. Tickets range from $11 to $50, available by calling 330-836-5533.

Woo-woo! Today's Train Day! A bunch of locomotive-related stuff -- including engineers discussing their work, songs about the railroad, and a huge model-train display -- will be there. Some real trains will be rolling too. There's also a primer on hobos, so you can learn the secrets of the trade -- like hand signals used by boxcar tramps to communicate with each other -- in case you ever feel the need to ride the rails. Train Day runs 10 a.m. to 4 p.m. at CanalWay Center (on Whittlesey Way in the Ohio & Erie Canal Reservation in Cuyahoga Heights). Admission is free; call 216-206-1000.

The Zoobilation Wildlife Art & Music Festival celebrates the Akron Zoo's 51st anniversary with live music, art displays, and a silent auction featuring artwork painted by animals (we hear the monkey is a regular Picasso). All this, and free ice-cream sundaes for everyone! It's at the Akron Zoo (500 Edgewood Avenue in Akron) 10 a.m. to 5 p.m. Admission is $7.50, $5 for kids. Call 330-375-2550 for more info.

More than 90 artists contribute paintings, carvings, textiles, pottery, and more to the 23rd annual Wildwood Fine Arts & Crafts Festival, happening today. There'll be food there, and a band will play live jazz to bop along to while you examine all the locally produced work. It happens from 10 a.m. to 6 p.m. at the Wildwood Cultural Center, 7645 Little Mountain Road in Mentor. Admission is $2; call 440-974-5735.

The kids participating at today's City Junior Olympics have their eyes on the prize: advancement to the county competition next month. Children ages 7 to 14 will compete in field events (softball throw, high jump), running events (50- to 800-meter dashes), and a 400-meter relay. The games take place from 6 to 9 p.m. at Willoughby South High School, 5000 Shankland Road in Willoughby. Admission is free. Call 440-953-4200 for more info.

The Quilts of Gee's Bend are unlike any quilts you've ever seen. "It's a fantastic surprise," says Louise Mackie, curator of the Cleveland Museum of Art exhibit. "These quilts have very strong patterns that [look like] contemporary and modern art." Sixty-five hand-stitched quilts from the 1930s to 2000 explore both the artistry and productivity of the women from Gee's Bend, a small, African American community in southwestern Alabama. "They were made out of necessity," Mackie explains. "They were made to keep their families warm. And they used fabrics from their lives. They used their work clothes and the shirts they wore in the fields. And they rarely copied patterns. These were strong and independent women." The Quilts of Gee's Bend is on view at the Cleveland Museum of Art (11150 East Boulevard) through September 12. It's open from 10 a.m. to 5 p.m. Tuesday, Thursday, Saturday, and Sunday and from 10 a.m. to 9 p.m. Wednesday and Friday. Admission is $8, $7 for students, $4 for kids 6 to 18, and free for the little ones. Call 216-421-7340 for more information.

Remember Seven Mary Three? "Cumbersome" was a huge modern-rock hit for the band, back when such things mattered. The foursome released its first new album in three years, Dis/Location, last month, and it sounds like someone's a little bit nostalgic for those days. The chugging, crunchy guitars are still there. So is singer Jason Ross's gruff Virginia drawl. All that's missing is around-the-clock airplay. At least you can hear some of the new songs when the group plays the Agora Ballroom (5000 Euclid Avenue) at 7:30 p.m. Tickets are $13 and $15; call 216-241-5555.