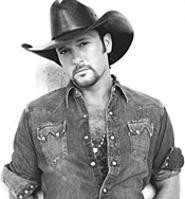 Unlike wife Faith Hill, Tim McGraw has stuck pretty close to his country roots. His songs about modern-day cowboys and working-class heroes are sincere portraits in the often-artificial world of mainstream country. He pulls the heartstrings a little too shamelessly at times, but we still get weepy when we hear "Don't Take the Girl" and "Grown Men Don't Cry." His new album is due out later this summer, and he's preparing for its release with a tour that brings him to Blossom Music Center (1145 West Steels Corners Road in Cuyahoga Falls) at 7:30 tonight. Tickets range from $31.75 to $63.75; call 216-241-5555.

Flocks of B-52's, Fairey Fireflies, C-123's, and other World War II-era planes fly in for this weekend's Gathering of Eagles IX. The air show also includes classic cars, live music, and a whole bunch of old military stuff (like uniforms, tents, weapons, and vehicles) on display. Aircraft tours and rides will also be available. It happens from noon to 7 p.m. today, 10 a.m. to 7 p.m. tomorrow, and 10 a.m. to 4 p.m. Sunday at Ashtabula County Airport, 2382 Airport Road in Jefferson. Admission is $5, free for kids 4 and under; call 216-587-4027.

We're not quite sure what the part-Greek, part-Puerto Rican Tony Orlando, southern rockers .38 Special, and country crooner Aaron Tippin have to do with this weekend's Stark County Italian-American Festival . . . except that they're all performing. No matter. There are plenty of paisan-friendly events and eats, including Italian car and cooking shows, music by Gene Fiocca and Frank Gallo, and more spaghetti, rigatoni, and ravioli than you can shake a grattugia at. It starts at 3 today and 1 p.m. tomorrow and Sunday at the Stark County Fairgrounds, 305 Wertz Avenue in Canton. Admission is free; call 330-453-3782.

Dave Alvin & the Guilty Men are one of the best bar bands in the world. On record -- like on the new Ashgrove -- the sound can be stifling and a bit dry. But onstage, where Alvin honed his guitar-playing chops fronting the Blasters a quarter-century ago, they smoke something fierce. Alvin's at the Beachland Ballroom (15711 Waterloo Road) at 9 tonight. Tickets are $15 and $18, available by calling 216-383-1124.

People just don't throw ice-cream socials anymore. They don't talk about late-19th-century politics like they used to either. Fans of both are in luck. Not only will sundaes be served at today's Ice Cream Social, but there'll be a re-creation of the campaign rally that got James Garfield elected President in 1880. And if that isn't enough to get the kids excited, games, activities, and crafts will be going on too. Get some of the cold, creamy stuff at the James A. Garfield National Historic Site (8095 Mentor Avenue in Mentor) from 1 to 4. Admission is $2, $1 for kids; call 440-255-8722.

Despite the subtitle (A Low Culture Manifesto) of his book, Sex, Drugs, and Cocoa Puffs, Chuck Klosterman thinks quite highly of pop culture. "It's overexposed but underappreciated," he says. "It's the soundtrack for people's lives, but the coverage is shallow." The scribe -- who's written for Spin, Esquire, and The New York Times Magazine -- says the key to his work is his ability to spot the relevance in society's trash. Sex, Drugs, and Cocoa Puffs riffs on everything from Pamela Anderson and Billy Joel to internet porn and basketball fever. "I try to position myself so I don't have to write about one singular subject," he explains. "I just like writing about what's interesting to me on that particular day." The former Akron Beacon Journal writer, who grew up on a farm in North Dakota and now lives in New York, says he does miss one thing about the Rubber City. "There's better Chinese food in Akron. I have not found a good Chinese restaurant, not even in Chinatown." Klosterman reads and signs his book (now out in paperback) at 7 p.m. at Joseph-Beth Booksellers, 24519 Cedar Road in Lyndhurst. Admission is free; call 216-691-7000.

The Children's Museum's Mother Goose Math: Rhyme & Arithmetic brings together two of kids' favorite subjects with a bunch of hands-on activities that involve lots of reading and counting. And since most of the summer won't be spent pursuing those academic endeavors, this exhibit -- which takes familiar stories and builds word and number problems around them -- should come in handy for fretful parents. "The King's Counting House," "One, Two, Buckle My Shoe Activity Center," and "Three Young Rats Sorting Wall" are just some of the mash-ups provided. And be sure to check out "London Bridge," where little ones ccan build and then knock down the famous structure. Mother Goose Math is at the Children's Museum of Cleveland (10730 Euclid Avenue) through early November. It's open 10 a.m. to 5 p.m. Tuesday through Sunday. Admission is $5; kids under a year get in free. Call 216-791-5437 for more info.

Michael Medcalf, artistic director of Cleveland Contemporary Dance Theatre, hopes that tonight's collaboration with the Cleveland Jazz Orchestra, Cleveland Contemporary Dance Theatre & Friends, is the beginning of a beautiful relationship. "I want to share the stage with live music," he says. In addition to a staging of "Brasilliance," which is set to Duke Ellington's music, the performance also includes a new piece Medcalf choreographed for Dancing Wheels (which they will perform at tonight's show). "The collaborative effort is energizing," he says. The show starts at 8 at Cain Park's Evans Amphitheater (on Superior Avenue and Lee Road in Cleveland Heights). Tickets range from $14 to $23, available by calling 216-371-3000.