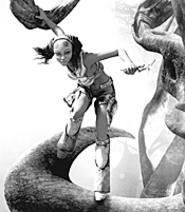 Four Caskets Project, So Yeon Park's exhibit at the Sculpture Center was inspired by her father, who passed away four years ago. "I went back to Korea for a memorial ceremony [a year later]," explains the Kansas resident. "And 9-11 happened the next day." The work, a reflection on grief and healing, features ceremonial coffins covered with paper flowers and other funeral imagery. "It's very idealistic," says Park. "And it's all about the reliving [of] emotions. It's about getting meaning out of [death]." The exhibit is on view at the Sculpture Center (1834 East 123rd Street) through September 17. It's open from 10 a.m. to 4 p.m. Monday through Friday and noon to 4 p.m. Saturday. Admission is free; call 216-229-6527.

Get your motors runnin' and your grills fired up for today's Great Biker BBQ, the Rock Hall's second annual outdoor music-and-ribs festival. Visitors are encouraged to park their bikes outside the museum, while meat sears over hot coals and the Deja Voodoo Band (featuring veterans of the local club scene) plays a couple scorchin' sets of vintage cover tunes by such artists as Stevie Ray Vaughan, Huey Lewis & the News, and the Clash. Harley-Davidson will be there with some new bike models and leather apparel to help take folks to hog heaven. It happens from 5:30 to 9 p.m. at the Rock and Roll Hall of Fame and Museum, 1 Key Plaza. Admission is free. For more information, call 216-515-1930.

Playhouse Square's Cinema at the Square series wraps up its seventh season this weekend with two showings of the greatest movie ever made. That would be The Godfather, duh. The classic 1972 film is loaded with such indelible images -- the horse's head in movie producer Jack Woltz's bed, Michael taking out a crooked cop at a restaurant, Sonny being torn to shreds by bullets at a tollbooth -- that seeing them on the Palace's super-huge screen oughta amount to a religious experience. So grab some cannolis and head for the Palace Theatre (1519 Euclid Avenue) at 7:30 tonight and 8:30 tomorrow. Tickets are $5, available by calling 216-241-6000.

More than 160 artists contribute to this weekend's Art on the Green in Hudson. It's the 24th outing of the fine-arts show, with participants coming from as far away as Canada and Florida to hock their wares. Live music will accompany your perusal of homemade pottery, sculptures, jewelry, paintings, weavings, and more. It happens on Hudson's South Green (which is at the corner of routes 91 and 303) from 10 a.m. to 5 p.m. today and 11 a.m. to 5 p.m. tomorrow. Admission is free; call 330-688-3430.

Its name alone -- Lollipoplooza --is far more fun than the similarly named modern-rock music festival. Tom Chapin, Red Grammer, Rick Hubbard, and Prairie Orchid will perform at the daylong children's festival, while Clifford the Big Red Dog and Geoffrey the Giraffe (African ruminant mammal/Toys R Us's figurehead) stroll the grounds and possibly battle for the title of Hugest Costumed Character. There will also be inflatable rides, marble tournaments, kite-flying, face-painting, workshops, and a stage show featuring Garfield, the lasagna-loving cat who's been celebrating his silver anniversary for more than a year now. It all takes place from 3 to 9 p.m. at Lock 3 Live! (on Main Street in downtown Akron). Tickets are $10, available by calling 330-253-2488.

Kaena: The Prophecy is France's first computer-animated feature, and it often plays like a video game. A curvy gal (voiced by Kirsten Dunst) takes on both her village's elders and the transparent monsters that scare the bejesus out of them . . . or something like that. The plot is basically sci-fi hokum (with a tiny, buried ecological message), and it's a bit silly (talking worms!), but the detailed landscapes and battle scenes are deftly rendered. Kaena's at the Cleveland Cinematheque (11141 East Boulevard) at 9:05 tonight. Admission is $8; call 216-421-7450.

This could very well be your last chance to take a Full Moon Hike in 2004 wearing just shorts and a T-shirt. And organizers are stressing that it's an adults-only event, so who knows? Maybe some will walk in less than that. The 90-minute hike starts at 7:30 p.m. at the A.B. Williams Memorial Woods parking lot (at North Chagrin Reservation in Mayfield Village). Admission is free; call 440-473-3370.

While the state-sanctioned truck, tractor, and semi pulls are certainly a draw to the 2004 Stark County Fair, it's the non-sanctioned truck, tractor, and semi pulls that have us totally pumped. Those always feature the real hard-ass bad boys of the pull circuit. Also appearing at the weeklong fair are the Oak Ridge Boys, Mark Lowry, and Dave Martin's Bullride Mania, the "extreme" branch of Martin's Championship Rodeos. The fair opens tonight and runs from 8 a.m. to 11 p.m. through September 6 at the Stark County Fairgrounds, 305 Wertz Avenue in Canton. Admission is $6 (some of the events have additional ticket fees); call 330-452-0621.

Don't let Halle Berry's recent cinematic stinker put you off feline entertainment -- it's still capable of box-office bonanzas. For example, Andrew Lloyd Webber's Cats, which opens tonight at Carousel, packs 'em in wherever it plays (it holds the honor of being Broadway's longest-running musical). Marc Robin's spacious staging makes use of the entire theater, so don't be surprised to find a hairball or two floating in your drink. Cats runs through November 7 at Carousel Dinner Theatre, 1275 East Waterloo Road in Akron. Show times are 8 p.m. Tuesday through Thursday, 8:30 p.m. Friday, 2 and 8:30 p.m. Saturday, and 5 p.m. Sunday. Tickets range from $25.50 to $46, available by calling 330-724-9855.